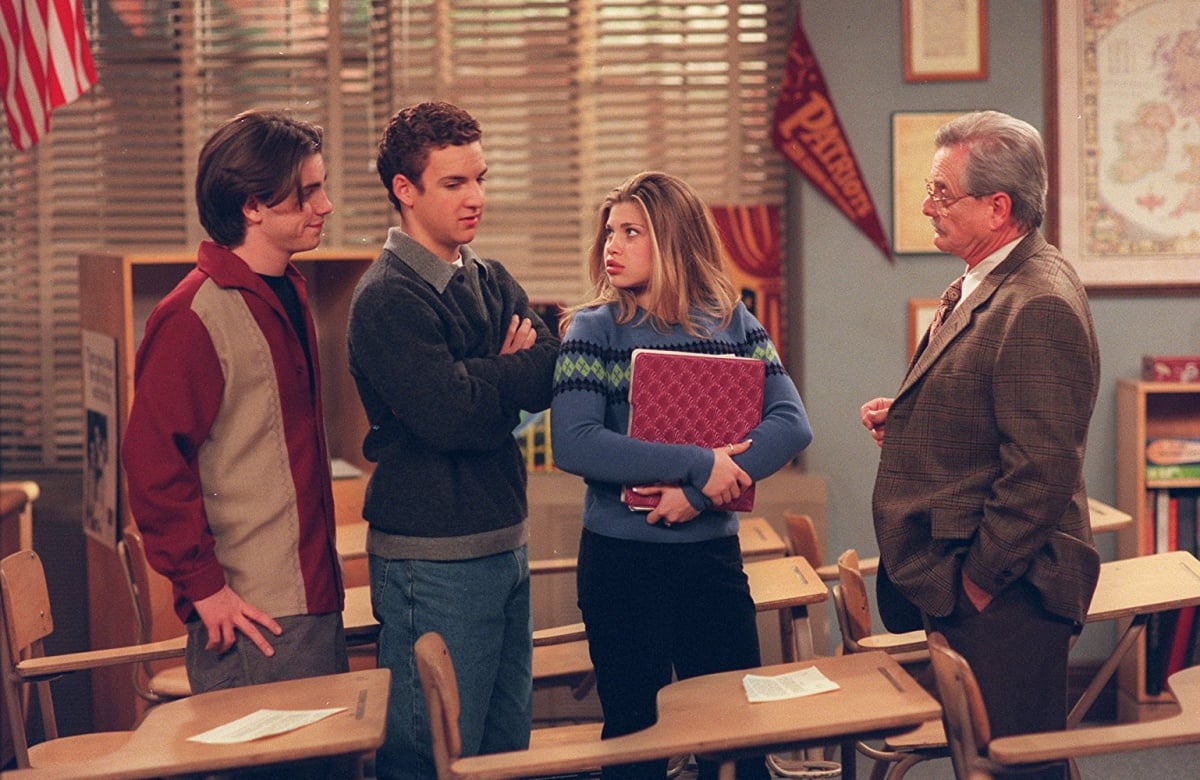 This year at New York Comic Con, the cast of Boy Meets World—Ben Savage (Cory Mathews), Danielle Fishel (Topanga Lawrence) and Will Friedle (Eric Mathews)—reunited, and I felt like a little kid again as I got to meet the icons of my adolescence.

I can’t remember the first time I watched Boy Meets World, but it’s been around for almost as long as I’ve been alive. I remember unwinding after a long week of school by watching TGIF with Boy Meets World and Two of a Kind, because it was my soap opera. I remember falling in love with Shawn, Cory, Eric, Topanga, and Angela over and over again as I watched reruns, and even a few years ago when I rewatched the show, I found myself impressed by it. Twenty-five years later, this show still connects with me in so many ways.

Even though it’s corny as hell, I’ve always loved Cory and Topanga’s relationship. Not only do they have great chemistry and (overall) a cute love story, but the thing I find most compelling about them is how deeply Cory feels about Topanga. Cory always waxed poetically about love and how their love was the one that would always make it. Looking back, it’s very powerful how deeply they loved each other and how Cory would stand up and be one of the main defenders of their love.

With the exception of the first season, which in true Boy Meets World fashion sets up a lot of things that will later be retconned, they don’t have the Sam and Diane, will-they-won’t-they relationship. The adoration the two have for each other feels real and powerful. Look at the episode A Long Walk to Pittsburgh: Part 2,” where Topanga shows up outside of Cory’s door in the rain, and Cory makes this impassioned speech about what love means to him and why he loves Topanga, and it’s just so beautiful because he means it.

Ben Savage as Cory Matthews always sold the sweetness and kindness of that character, so that even if you’re a bitter cynic like myself, you believe Cory and Topanga, because they do. The writers, the actors—they trust in this love, and as the audience, we then choose to accept it, as well.

Unlike a lot of people, I didn’t mind when Topanga “gave up Yale” for Cory, because she wanted both, and that’s okay. Cory wasn’t some fling or even just a high school boyfriend. They loved each other, and Cory never asked her not to go. She didn’t go because she wanted to be with Cory more than she wanted to go to Yale, and that choice didn’t stop her from being an amazing lawyer or achieve her goals. She just did it with the man she loved.

Ah, the bromance. There is little to be added about the epic twosome of Shawn and Cory that hasn’t already been said. Shawn and Cory are the ultimate OTP, and what’s so great about them is the total lack of chill they have towards each other. The show leans into the fact that, even more so than their female romantic partners, they are also soulmates.

Sadly, there were also times they’d lean a little into the gay-anxiety-for-a-gag humor of the ’90s, hurt even more by the fact that Boy Meets World didn’t have any gay characters. Overall though, I always think it’s a positive thing when a show allows two cis/het men to say they love each other and mean it.

Healthy male friendships are important. Though I love Shawn/Angela and Cory/Topanga, it’s also really important to have the Shawn & Cory representation, and their friendship was always a priority to both of them.

A lot of shows fall apart when making the transition from high school to college, but Boy Meets World really thrived in that environment. It didn’t shy away from dealing with a lot of intimacy issues in sex, dating, and marriage.

In terms of subversive things the show did overall, for a youth-oriented program of its time, it needs to be highlighted Boy Meets World was talking about and addressing racism from its first season. Boy Meets World was very much about morality and kindness and teaching empathy. In the episode “Chick Like Me,” Shawn dresses as a girl to understand the experience of being a girl.

Not only does Shawn pull off being a beautiful girl flawlessly (and has a name picked out for his alter-ego), but the episode isn’t there to mock the experience of dressing in drag. It’s there to teach Shawn about his own bad behavior. At the end of the episode, Shawn has to realize that maybe he’s behaved poorly, and it’s time to change.

Boy Meets World didn’t shy away from letting Cory or Shawn be emotional people who love, lose, and cry. When I think about the fact that one of the most popular shows on television wasn’t afraid to talk about emotions with its male leads, it both makes me proud, but also makes me want to side-eye the men of my generation even more—like, did you learn nothing?

They didn’t make them saints, and spoke frankly about sex, especially in the college years, but allowed them to be people and questioned them openly when they did mess up.

The only problem I’ve ever seriously had with Boy Meets World was the treatment of one character: Angela Moore. As a child of the ’90s, characters like Susie, Jodie, Moesha, etc. were important to me, whether I loved them (Jodie) or felt indifferent towards them (Susie), and while there were a lot of great black-targeted shows for girls my age, it was also wonderful to see nuanced black characters in shows that were not “black.”

The introduction of Angela Moore, Shawn’s long-term girlfriend, and Topanga’s best friend, was like a small gift that told me that I too could exist in this world, outside of a “race episode.”

By the time I was probably allowed to watch the show, Angela had already been a part of the series, so as far as I knew, she’d always been there. I remember talking to my other classmates about how awesome it was that Angela and Shawn were a couple, and as an adult, I appreciate it even more. Angela was darker skinned, had all different kinds of hairstyles—from natural to relaxed to braids—and she always looked good. And she had Shawn, the “it boy” for straight/bi girls my age. Hell, even now, Rider Strong emits strong reactions from us ’80s/’90s babies.

One of the things I noticed upon rewatching was that, when the foursome goes to college, Shawn decides to break things off with Angela, insisting that they should “meet new people,” even though Shawn actually still has feelings for Angela, and she is still in love with him. Shawn plays these weird back and forth games with her until she says she’s done.

Then, in season seven, it’s switched to be that Angela doesn’t want to get back with Shawn, because she’s afraid she’ll hurt him. While they do end up back together at the end of the season, she leaves to spend time with her father, and they promise to not break up and to make it work, although Shawn acts like they have broken up. It’s a frustrating way to see that character go, and a weird retcon to make Angela the reason they’re not together instead of Shawn.

The problem with this retcon is that it becomes the canon issue during the revival series, Girl Meets World. In Girl Meets World, even though Angela was Topanga’s best friend and a good friend of Cory, she doesn’t exist outside of Shawn. They make it seem like she left him high and dry, which allows Shawn to step in to date Maya’s mother.

For me, with all the good that Girl Meets World was trying to do, it was a very white show, and the removal and downgrading of Angela was a huge issue for me. I hated the way it talked down to Angela and Shawn’s deep bond and connection. One line had Shawn say, “Do you know what it’s like to go to high school with Romeo & Juliet? And so, I loved Angela because I thought I was supposed to.”

Especially annoying is the excuse that it was unrealistic for both Cory and Topanga and Shawn and Angela to be together. Boy Meets World was all about the power of love to keep people together through impossible circumstances. Even if there had been some fallout between the writers and Trina McGee-Davis, I’d rather they had tried to recast the character with another dark-skinned black actress than just swap her out with a white woman.

It was hurtful and took away a piece of representation that was super important not just to me, but for so many black girls who grew up watching the show.

Despite this, I still hold Boy Meets World close to my heart. It’s my comfort food, and the cast is just so sweet and awesome. I’m glad it exists, and while it certainly didn’t need a spinoff, I was happy to know that Cory and Topanga made it work. That’s the happy ending we all wanted.