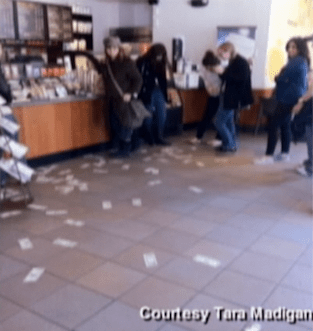 Reportedly, a drunk man entered a Boston Starbucks on St. Patrick’s Day and, as they say, made it rain. Shown in the picture above, snapped with a mobile phone, the man threw $100 bills around the Starbucks, while shouting “I’m rich!” multiple times before leaving the establishment. Supposedly, no one made a mad dash for the bills sitting on the floor, probably too stunned by the act, or too embarrassed to be that guy. A Starbucks employee eventually collected the money and donated it to Japan earthquake relief efforts.