As a person who identifies on the asexual spectrum, I rarely find representation concerning this part of my identity within mainstream media. In a previous article about asexual representation, I had bemoaned the lack of/problematic representation of asexual characters on television, highlighting Riverdale and the erasure of asexual-aromantic representation with its version of Jughead.

Luckily, print fiction, especially young-adult fiction, has made significant strides in showcasing this part of the LGBTQIA+ community, featuring the nuanced representation that’s so very lacking on the big or small screen. From books that focus primarily on romance to adventurous swashbuckling pirates, asexuals are beginning to be seen on the page in all types of stories.

1. The Lady’s Guide to Petticoats and Piracy by Mackenzi Lee 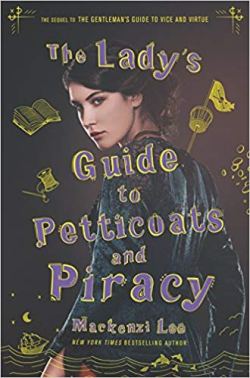 “A year after an accidentally whirlwind grand tour with her brother Monty, Felicity Montague has returned to England with two goals in mind—avoid the marriage proposal of a lovestruck suitor from Edinburgh and enroll in medical school. However, her intellect and passion will never be enough in the eyes of the administrators, who see men as the sole guardians of science.

“But then a window of opportunity opens—a doctor she idolizes is marrying an old friend of hers in Germany. Felicity believes if she could meet this man he could change her future, but she has no money of her own to make the trip. Luckily, a mysterious young woman is willing to pay Felicity’s way, so long as she’s allowed to travel with Felicity disguised as her maid.

“In spite of her suspicions, Felicity agrees, but once the girl’s true motives are revealed, Felicity becomes part of a perilous quest that leads them from the German countryside to the promenades of Zurich to secrets lurking beneath the Atlantic.

I love the fact that, in addition to showcasing much-needed diversity in historical fiction (including queer characters, characters with disabilities, religious diversity, characters of color, etc.), the author explicitly confirms that Felicity is on the Aro/Ace spectrum. Also, The Lady’s Guide to Petticoats and Piracy is actually a companion novel to Mackenzi Lee’s Stonewall Award-winning (and must-read) book The Gentleman’s Guide to Vice and Virtue, featuring Felicity Montague’s brother, Henry “Monty” Montague, as the protagonist, who is also the definition of a bisexual disaster. 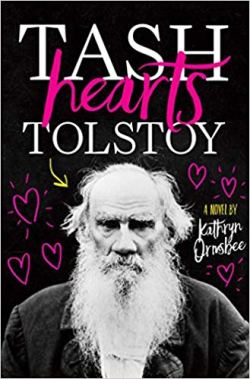 “After a shout-out from one of the Internet’s superstar vloggers, Natasha ‘Tash’ Zelenka finds herself and her obscure, amateur web series, Unhappy Families, thrust into the limelight: She’s gone viral.

“Her show is a modern adaptation of Anna Karenina—written by Tash’s literary love Count Lev Nikolayevich ‘Leo’ Tolstoy. Tash is a fan of the forty thousand new subscribers, their gushing tweets, and flashy Tumblr GIFs. Not so much the pressure to deliver the best web series ever.

“And when Unhappy Families is nominated for a Golden Tuba award, Tash’s cyber-flirtation with Thom Causer, a fellow award nominee, suddenly has the potential to become something IRL—if she can figure out how to tell said crush that she’s romantic asexual.

“Tash wants to enjoy her newfound fame, but will she lose her friends in her rise to the top? What would Tolstoy do?”

While the protagonist in Tash Hearts Tolstoy identifies as heteroromantic asexual, in real life, the author, Kathryn Ormsbee, identifies as demisexual and has spoken in various interviews about how she wrote this book as the type of story she needed to validate her own feelings as a teen, showing the importance of #OwnVoices.
3. Let’s Talk About Love by Claire Kann 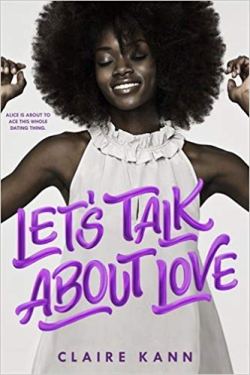 “Alice had her whole summer planned. Non-stop all-you-can-eat buffets while marathoning her favorite TV shows (best friends totally included) with the smallest dash of adulting—working at the library to pay her share of the rent. The only thing missing from her perfect plan? Her girlfriend (who ended things when Alice confessed she’s asexual). Alice is done with dating—no thank you, do not pass go, stick a fork in her, done.

“But then Alice meets Takumi and she can’t stop thinking about him or the rom com-grade romance feels she did not ask for (uncertainty, butterflies, and swoons, oh my!).

“When her blissful summer takes an unexpected turn, and Takumi becomes her knight with a shiny library employee badge (close enough), Alice has to decide if she’s willing to risk their friendship for a love that might not be reciprocated—or understood.”

In addition to a beautifully ace-coded cover (showing that Purple, Grey, White, and Black Pride!), Let’s Talk About Love is the first book I’ve seen to center an African-American biromantic asexual woman, which also acts as an adorable, hopeless romantic. 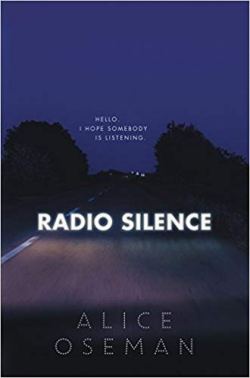 “What if everything you set yourself up to be was wrong?

“Frances is been a study machine with one goal. Nothing will stand in her way; not friends, not a guilty secret—not even the person she is on the inside. Then Frances meets Aled, and for the first time she’s unafraid to be herself.

“So when the fragile trust between them is broken, Frances is caught between who she was and who she longs to be. Now Frances knows that she has to confront her past. To confess why Carys disappeared …

“Frances is going to need every bit of courage she has.”

Though the protagonist in Radio Silence does not identity on the asexual spectrum (she’s bisexual), the deuteragonist does, and it’s the first time I’ve seen the word demisexual on the written page, which is pretty amazing, in addition to just being one of the best books on fandom and friendship ever written. Also, in addition to being an amazing YA author, Alice Oseman is a lovely comic artist and has created one of the most accurate comics for Asexual Awareness Week.

5. Shades of A by Tab Kimpton 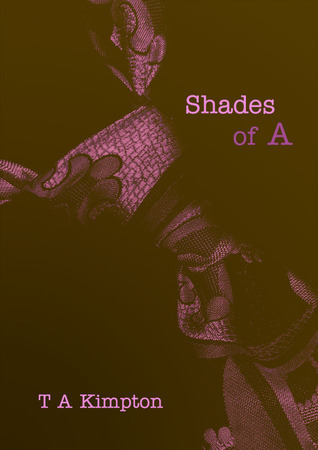 “When openly asexual Anwar Sardar gets dragged to a kink night by his (soon to be ex) best mate, JD; he is surprised to make friends with Chris Slate, a middle aged transvestite with a penchant for Dr Who. Convinced they’ll never meet again Anwar puts him out of his mind, but the awkwardly charming man keeps turning up in his life.” 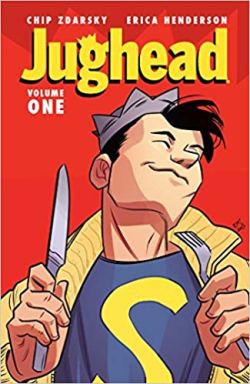 “Riverdale High provides a quality education and quality hot lunches, but when one of those is tampered with, JUGHEAD JONES swears vengeance! Well, I mean, he doesn’t “swear.” This is still Archie Comics after all.”

Chip Zdarsky wrote the first series arc of the relaunched Jughead comic in which Jughead comes out as Aromantic-Asexual. Unfortunately, the show Riverdale decided not to acknowledge this canon representation, erasing one of the only visible Asexual-Aromantic characters in mainstream comics.

7. All the Wrong Places (A Bluewater Bay Novel) by Ann Gallagher 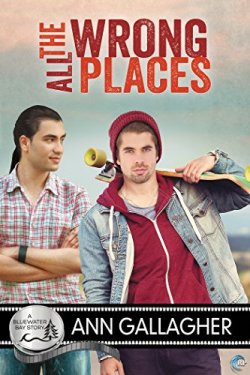 “Three cheating girlfriends in a row have given skateboarder Brennan Cross the same excuse: he wasn’t meeting their needs. Desperate and humiliated, he goes to the professionals at the local sex shop for advice.

“Zafir Hamady, a sales clerk at Red Hot Bluewater, has an unusual theory: he doesn’t think Brennan is a bad lover. In fact, he doesn’t think Brennan is heterosexual. Or sexual at all, for that matter. He also can’t stop thinking about Brennan. But even if he’s right and Brennan really is asexual, that doesn’t mean Zafir has a chance. Brennan’s never dated a man, and Zafir’s never met anyone who’s game for a Muslim single father with a smart mouth and a GED.

“Brennan’s always thought of himself as straight. But when sex is explicitly out of the mix, he finds himself drawn to Zafir for the qualities and interests they share. And Zafir can’t help enjoying Brennan’s company and the growing bond between Brennan and his son. They work well together, but with so many issues between them, doubts creep in, and Brennan’s struggle with his identity could push away the one person he didn’t know he could love.”

Riptide Publishing has a controversial reputation in regards to their treatment of queer authors of color, and I do not condone their behavior. I am merely including this individual book because I enjoyed the sweet romance and author’s respectful portrayal of the asexual community, including featuring two asexual men in a relationship, one of whom identifies as a biromantic asexual Lebanese-American Muslim. 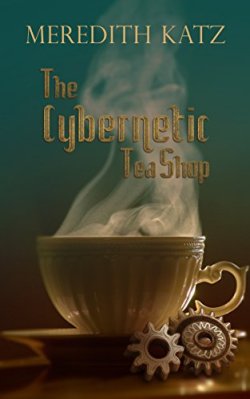 “Clara Gutierrez is a highly-skilled technician specializing in the popular ‘Raise’ AI companions. Her childhood in a migrant worker family has left her uncomfortable with lingering in any one place, so she sticks around just long enough to replenish her funds before she moves on, her only constant companion Joanie, a fierce, energetic Raise hummingbird.

“Sal is a fully autonomous robot, the creation of which was declared illegal ages earlier due to ethical concerns. She is older than the law, however, at best out of place in society and at worst hated. Her old master is long dead, but she continues to run the tea shop her master had owned, lost in memories of the past, slowly breaking down, and aiming to fulfill her master’s dream for the shop.

“When Clara stops by Sal’s shop for lunch, she doesn’t expect to find a real robot there, let alone one who might need her help. But as they begin to spend time together and learn more about each other, they both start to wrestle with the concept of moving on …”

This very cute and queer novella features a slow-burn sci-fi f/f romance between an asexual Latinx mechanic and an android, and avoids the problematic trope typecasting the asexual character as the “robotic” type.

Feel free to mention any other noteworthy stories (novels, TV shows, etc.) that you feel feature decent asexual representation in the comments below!