Kate Wiswell’s new book, Full-Frontal Nerdity, is “a collection of personal essays about applying all that ‘useless’ book learning from school to the more practical pursuits of life, love, and releasing your inner quantum.” In short, it’s Everything Nerdy I Learned In School Can Actually Be Applied to Everyday Life In New and Exciting Ways.

We were excited to find out more about the ancient, female-aligned origins of Leap Day—today—via Wiswell’s book, and now you can, too.

(The following is an abridged excerpt from Full-Frontal Nerdity: Lessons in Loving and Living with Your Brain)

It’s a tale as old as timekeeping: the greatest innovation of the calendrical arts is credited to “Father of Leap Day” Julius Caesar, and where did he get the idea? From a woman. Gather ‘round, kids, for a very “timely” lesson.

Once upon a time, there was a Pontifex with a Problem. His people, the Romans, were having trouble keeping track of things. They had adopted a lunar calendar, you see, but as any woman could have told them (if they’d asked), letting yourself be ruled by a lunar cycle is no way to live. The trouble was that the Man on the Moon takes on average 29.5 days to complete one of his cycles, which adds up to a 354-day year. Mother Earth, on the other hand, has more to do; she takes roughly 365.25 days to get all the way around the sun, which made the Roman calendar a full 11.25 days too short. In just a few years, this communication gap had wreaked complete havoc, landing the Ides of March in April, which is just chaos.

Like the Classic men that they were, the Romans chose to simply ignore this problem until it got so big that they finally couldn’t; they then “fixed” it by inserting a random extra month into the year now and then, forcing Spring back where she was supposed to be. Effective? Yes. Functional? Maybe. But much like a frat house, it’s not a good look up close.

In a different part of the world, a Queen and her Egyptians had been listening to Mother Earth and had thus devised a brilliant strategy for living in harmony with Nature. They kept a calendar of twelve tidy 30-day months, then made up the excess time with a five-day party at the end of each year. Every fourth year, that party went for six days.

Kids, if this sounds like the best idea humankind has ever had, it’s because it was.

By the time Julius Caesar met Cleopatra, things had gotten way out of hand for the Romans. They’d ignored their time problem so long that Spring was hiding in Summer and snow was falling in May. Julius was impressed by Cleopatra’s brilliant calendar (and everything else about her), so he did what men in power usually do in these situations: he stole her idea, made it a little less good, and proudly declared it to be his own.

First, Julius had to get his Roman calendar back on track, which could have happened by letting time take its course, but was more fun to do with brute force. (Brutus force? That would come two years later.) Declaring 46 B.C. the “Year of Confusion” (no kidding) Caesar made it 445 days long and forced that sneaky Spring Equinox back to late March. He then scrapped Cleo’s New Year’s Epic Eve party and instead sprinkled extra days around the new Julian Calendar (of course), and decreed that every fourth year one extra day would be added to the end – which, at the time, was February.

And everyone lived happily ever after in harmony with Nature – until Pope Gregory XIII had to tweak it a little more about 1500 years later, but that’s another story. Ours ends with Julius Caesar being celebrated for “his” innovation and elevated to Dictator for Life (a rather short life, as it would turn out).

The buried feminist roots of Leap Day seem to have caused some residual guilt that has seeped out in the form of misguided attempts at women’s empowerment. In Ireland and the U.K., Leap Day became traditionally the one day women were allowed to propose to men – and had to be compensated (with money or clothes) if turned down. Sure, it’s totally sexist, but it gave us a cute Amy Adams movie. In the U.S., this tradition became “Sadie Hawkins Day” (celebrated November 15th in non-leap years), and in one city – Aurora, IL – single women are deputized on Leap Day to arrest single men. That’s a version of Wayne’s World I’d love to write someday.

But I suggest that we take this cautionary tale of losing Cleopatra’s genius to the less-competent maneuverings of an arbitrarily powerful man, and instead learn the obvious lesson it has to teach us: if you want to keep the party intact, just listen to women of color in the first place. If we had in leap year 2016, imagine where we might be now. Let’s not miss our chance in 2020.

This is a lesson to follow every day, and we adore how far back women in history are intertwined with Leap Day and its traditions. The more you know! Now go forth, educate your friends, and arrest some men.

You can find this story, and many more, in Full Frontal-Nerdity by Kate Wiswell.

What does a centuries-old math problem have to teach us about a woman’s biological clock and the pressure to marry? How is the history of Leap Day a cautionary tale about traditional gender roles and asserting power? How can Bayesian reasoning stop us from writing off a potential partner too early or letting a dud stick around too long? How can we learn to love our quirks, and, by doing so, release our inner quantum? In a series of short, light-hearted pieces, Wiswell’s new book, “Full-Frontal Nerdity,” will introduce readers to some fascinating nerdy concepts, explore the more practical lessons to be gleaned from those subjects, and provide a newfound depth of understanding about living, loving, and simply being in a humorously complex world.

The personal essays of “Full-Frontal Nerdity” also explore the struggles of being a thinking adult in an often-irrational world. The author takes inspiration from the many subjects that have sparked her curiosity over the years – statistics, mythology, physics, poetry, and even the history of pi – to gain insight into the everyday mysteries of living. 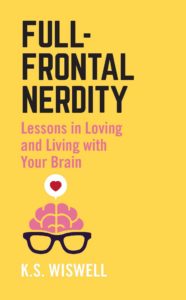 K.S. Wiswell went into Harvard to become a cryptographer and came out with a degree in English Literature. Along the way, she studied physics, statistics, philosophy, mythology, and marching band. After three years in the corporate world, she escaped to Los Angeles and joined the Second City, because improv is cheaper than therapy. She remains an overeducated comedy writer who teaches logic to balance the insanity. Over the years, she has been told by serious men that she is “pretty smart for a girl,” “pretty funny for a girl,” and once (after a disastrous Mary Lou Retton-inspired haircut) “pretty cute for a boy.” All of which is pretty dumb for a society, so she has made it her mission to promote the fact that Smart Is Sexy.