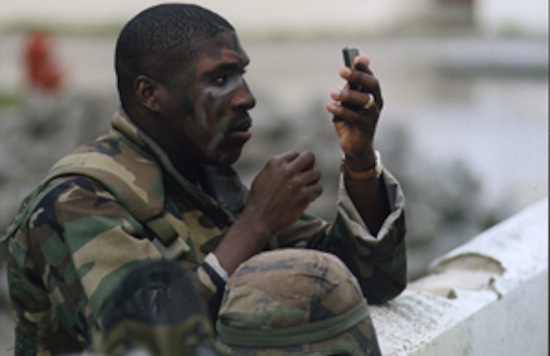 A new type of camouflage paint could protect soldiers in the field from the searing heat of bomb blasts. Developed by the University of Southern Mississippi at the direction of the Department of Defense, the paint replaces its traditional carbon base with silicone that is non-flammable and can absorb heat. The change means that just a thin layer of camouflage face paint could not only help soldiers escape detection, but prevent burn injuries and facial scarring from run-ins with explosives. The substance made its debut today at a meeting of the American Chemical Society in Philadelphia.

When bombs go off, the concussive force released is responsible for much of the damage done, but if action movies have taught us nothing else, it is that bombs also result in huge releases of heat when they go off. While these are just cool fiery geysers on the big screen, the heat released by explosions — which can reach up to 600 degrees Celsius — can leave soldiers wounded, scarred, or dead.

The new silicone face paint, though, can take the heat long enough for soldiers wearing it to get out of the kitchen, providing them with a couple precious seconds of protection immediately following an explosion. When every moment counts, those two seconds can mean a lot. Applied to bare hands, the paint protected test subjects with from first-degree burns for as long as 15 seconds, meaning soldiers could even have the chance to operate for a moment or two in areas still inflamed by a bomb blast without suffering injuries.

Though there’s no timeline for when it will get its first tests on the battlefield, researchers have enough confidence that they’re already looking at modifying it to a clear gel form that could protect firefighters, as well as a version suitable for fabrics.