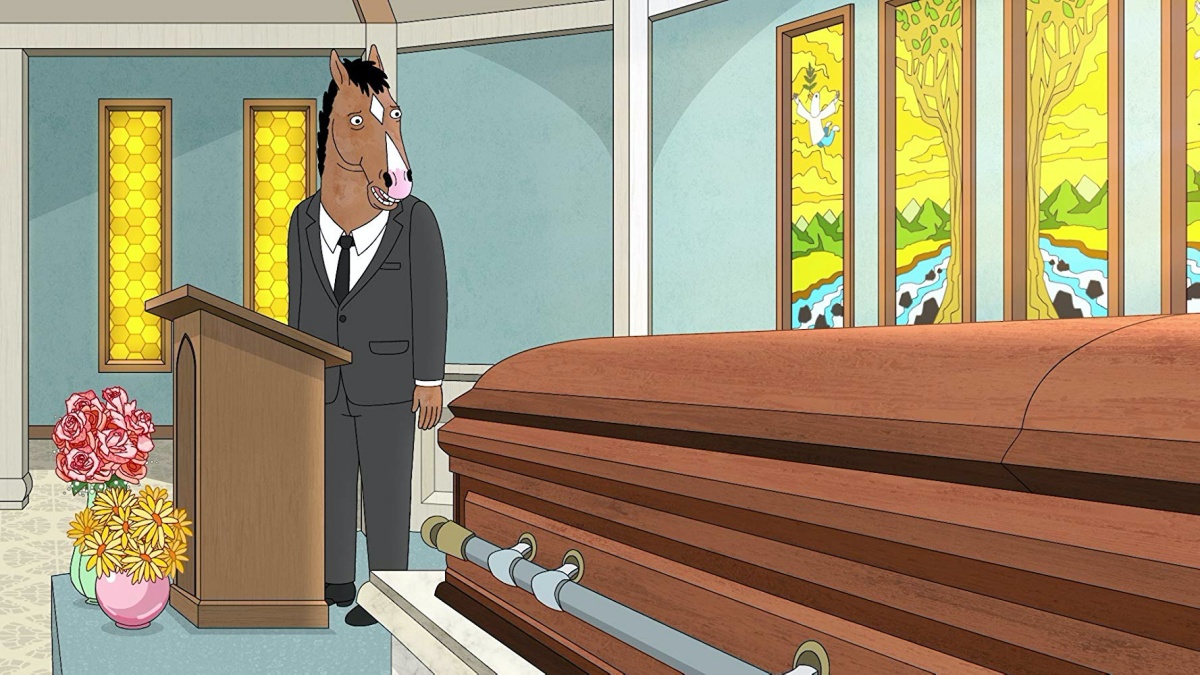 Catching up with Netflix’s BoJack Horseman is always a grueling experience, because it’s one of the few shows about mental illness that I think consistently hits the mark, not just about how complex and harrowing mental health issues and addiction can be, but the scars they leave behind—both personal and communal. In the first part of the final season, we see our titular character go down a really strong path of handling his addiction, but since this is BoJack, it never forgets that for most of his life, he was a mean drunkard with abusive behavior.

**Spoilers for season six, part one, of BoJack Horseman.**

Throughout this season, the ghost of Sarah Lynn and the role BoJack played in her death haunts him. It’s clear that, while he is burdened by a lot of his failures, the failure to help Sarah Lynn has hurt BoJack the most. Before Hollyhock, she was the one who looked to BoJack as a father figure, but he let her down—but that’s not the only person.

In “A Quick One, While He’s Away,” the final episode of this half of the season, we are reacquainted with Kelsey Jennings and Gina Cazador.

Kelsey Jennings was the director of Secretariat, who was blamed for the Nixon Museum break-in and was fired, taking all the blame while BoJack was allowed to go forward and win an Oscar. Kelsey has been blacklisted of sorts, making cinematic commercials for a streaming service called Gronkle. Girl, I’m so sorry. Her potential big break comes when she’s up for the chance to make a female superhero movie called Fireflame. Despite needing this opportunity, Kelsey is unable to swallow the sexist bullshit that the studio wants her to make with this film.

With Gina, who was BoJack’s costar and girlfriend last season, she has been elevated to a new level of stardom, leading her own show, but is sadly still suffering some trauma from being physically assaulted by BoJack while he was on drugs. They decided to cover the incident up because Gina didn’t want it to stain her career or become what she was known for. However, because of her need for control in the aftermath, she is labeled a diva and “hard to work with,” so much so that when Kelsey is looking to cast a woman for Fireflame, she is encouraged to pass Gina by because of her growing bad reputation.

This episode is a fantastic reminder that while, yes, BoJack does need to get help and it’s great that he has worked to improve himself, that is only part of the journey for him. He has abused women, manipulated women, and left them in his wake while he has been allowed the privilege to recover at his own snail’s pace. And the episode ends with a heavy wham when we see Hollyhock at a college party, talking to a guy named Peter. At first, he just seems like another side character, until he starts describing an incident.

Peter talks about how the first time he went drinking, his girlfriend got her stomach pumped after drinking too much bourbon that they got from this older guy, who was living at the home of another one of his friends. That’s when you realize that Peter is talking about Penny, and Hollyhock is about to find out about the thing that BoJack has been ashamed of since season two.

It’s a devastating blow because we realize that Hollyhock is going to see her brother in a completely new light—a dark one—but that yes, the BoJack who we saw embracing his age, helping people, and trying to get a new job is still the same person who took advantage of a teenager. The cycle of trauma continues, and how it’ll all end is something we will be waiting to see when part two drops next year.

For me, as a fan of the show and as someone who loves BoJack’s character, it’s a potentially dark ending, but at the same time, he deserves to have to deal with the repercussions of what he’s done. He has healed by running and hiding. The time for that is over.