Bojack Horseman Writer On Gender in Comedy-Writing | The Mary Sue

It's also just a super great show you should watch. 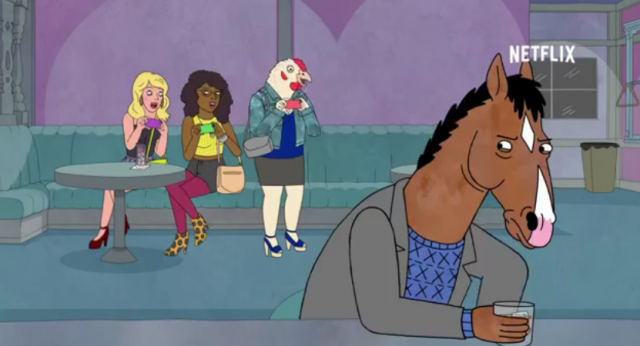 For a show about a washed up horse actor who lives in a world where animals and people coexist as sentient clothes-wearing beings, Netflix’s Bojack Horseman is surprisingly good with representation for its humans. I’m not even talking about the show’s recurring cast, either—there’s a pretty decent amount of minor background characters who are female, POC, or both. According to the show’s creator, Raphael Bob-Waksberg, that’s all intentional.

While answering questions about the show on his Tumblr recently, Bob-Waksberg was asked how the writers come up with all the different visual bits involving the different animals in the show, such as the crocodile who wears crocs. (To answer that, a lot of the sight gags come from Supervising Director  Mike Hollingsworth, though the crocs specifically are probably from head designer Lisa Hanawalt). But, he points out, the person who questioned him inadvertently mis-gendered the crocodile as a “he” when asking their question, when in actuality the crocodile is a woman played by Kulap Vilaysak. 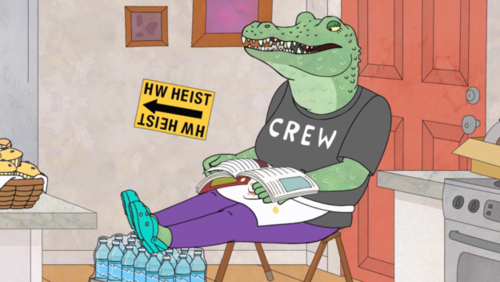 This, he writes, is indicative of “the tendency for comedy writers, and audiences, and writers, and audiences to view comedy characters as inherently male, unless there is something specifically female about them.” He cites an example from his own work, in which a storyboarded joke that features a dog person drooling on a businessperson was imagined as two men, until Lisa Hanawalt designed them as women. These women, specifically: 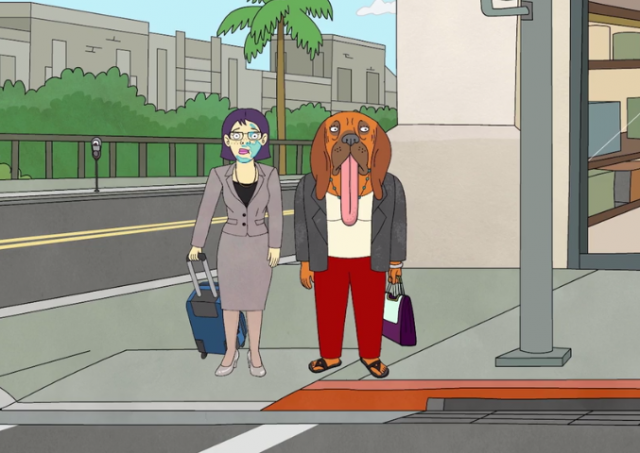 Bob-Waksberg noted feeling weird about the change until, when prodded by Hanawalt, he couldn’t offer up a reason why it felt weird—it was just his own biases being triggered, so they left it in. He explains:

The thinking comes from a place that the cleanest version of a joke has as few pieces as possible. For the dog joke, you have the thing where the tongue slobbers all over the businessperson, but if you also have a thing where both of them ladies, then that’s an additional thing and it muddies up the joke. The audience will think, “Why are those characters female? Is that part of the joke?” The underlying assumption there is that the default mode for any character is male, so to make the characters female is an additional detail on top of that. In case I’m not being a hundred percent clear, this thinking is stupid and wrong and self-perpetuating unless you actively work against it, and I’m proud to say I mostly don’t think this way anymore. Sometimes I still do, because this kind of stuff is baked into us by years of consuming media, but usually I’m able (with some help) to take a step back and not think this way, and one of the things I love about working with Lisa is she challenges these instincts in me.

“I try to think about that when writing new characters,” Bob-Waksberg also says, recalling a story about the reported divisiveness of the toaster’s gender in The Brave Little Toaster. “Is there anything inherently gendered about what this character is doing? Or is it a toaster?” If it’s the latter, then he should have no problem writing it for a woman, or someone of a different underrepresented race. Pretty good advice for content creators of all kinds, we think.