I can't recommend this series enough 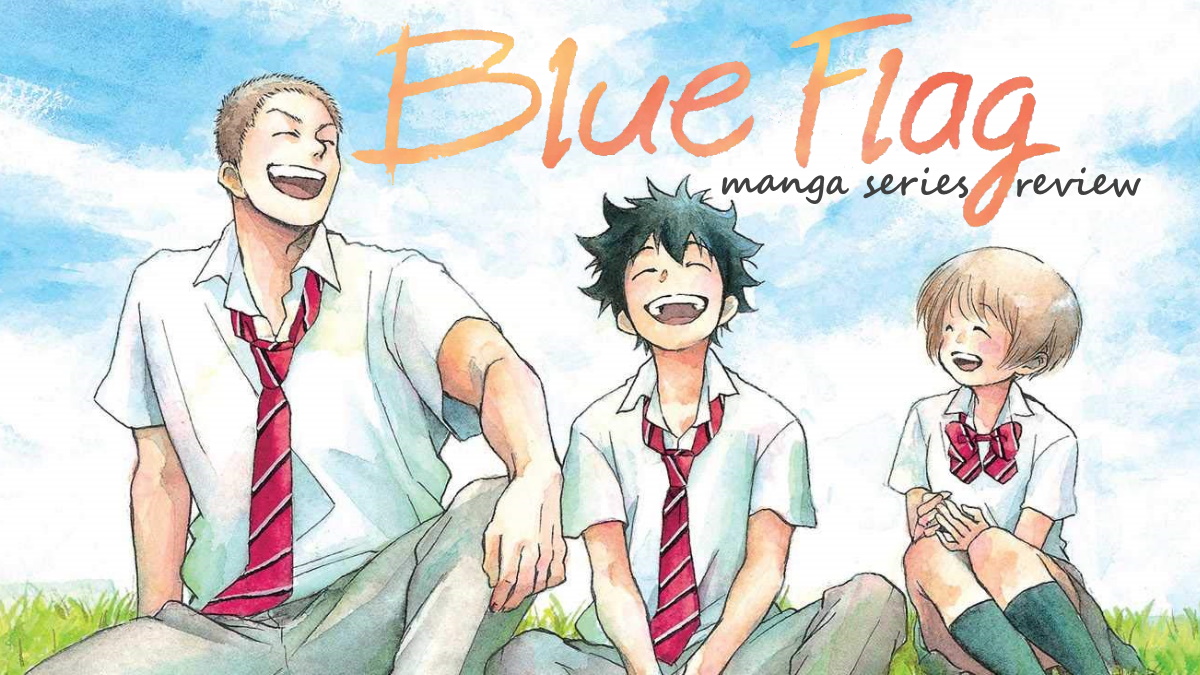 “I’m interested in LGBTQ+ manga,” I said to ViZ when deciding on titles to review.

“Here’s six volumes of Blue Flag,” they said in response.

My plan was to read a volume, review it, and maybe do reviews of the rest of it over time. Then I … um … accidentally read all 6 volumes in 3 days.

Blue Flag is SO GOOD!

This series has a similar vibe to stories like Kids on the Slope. You expect a messy love triangle of “Boy likes Girl, but Girl likes Other Boy,” but much like Kids on the Slope there is so much more to the story. Blue Flag very much embodies themes of friendship, self-discovery, and navigating your ever-evolving feelings about the people who are close to you.

Oh, and yes, there are canonical LGBTQ+ elements throughout. At the start of his third year in high school, Taichi Ichinose ends up in the same homeroom as Futaba Kuze, one of the many girls who’s got a crush on his childhood friend, Toma Mita. Taichi and Toma aren’t as close as they used to be, Toma an extremely popular boy who the entire school loves while Taichi stays in the background with his nerdy group of friends. Even if both boys have their own friend groups, Toma still likes talking to Taichi (much to the surprise of the entire student body). It’s the perfect chance for the shy, extremely flustered Futaba to get tips from Taichi on how to approach Toma.

Except Taichi starts to develop feelings for Futaba.

But Futaba is in love with Toma … maybe?

Toma, who’s already in love with someone else – his childhood friend, Taichi!!

Yeah, it’s not a love triangle, it’s a love quadrangle. 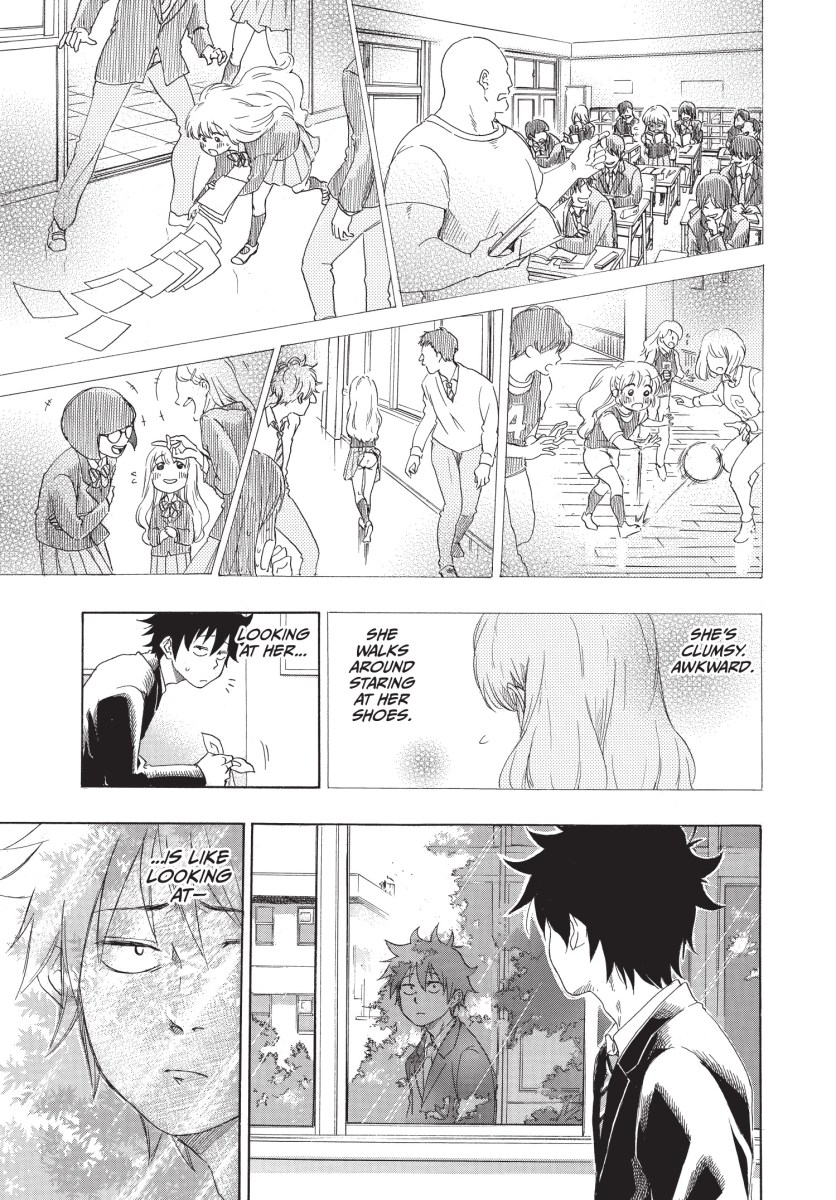 The rest? Is all of these characters developing relationships with each other (both platonic and romantic) and figuring out what it is they actually want. While the love quadrangle is explored throughout the series, the bigger focus is these four kids coming to care for each other in different ways. 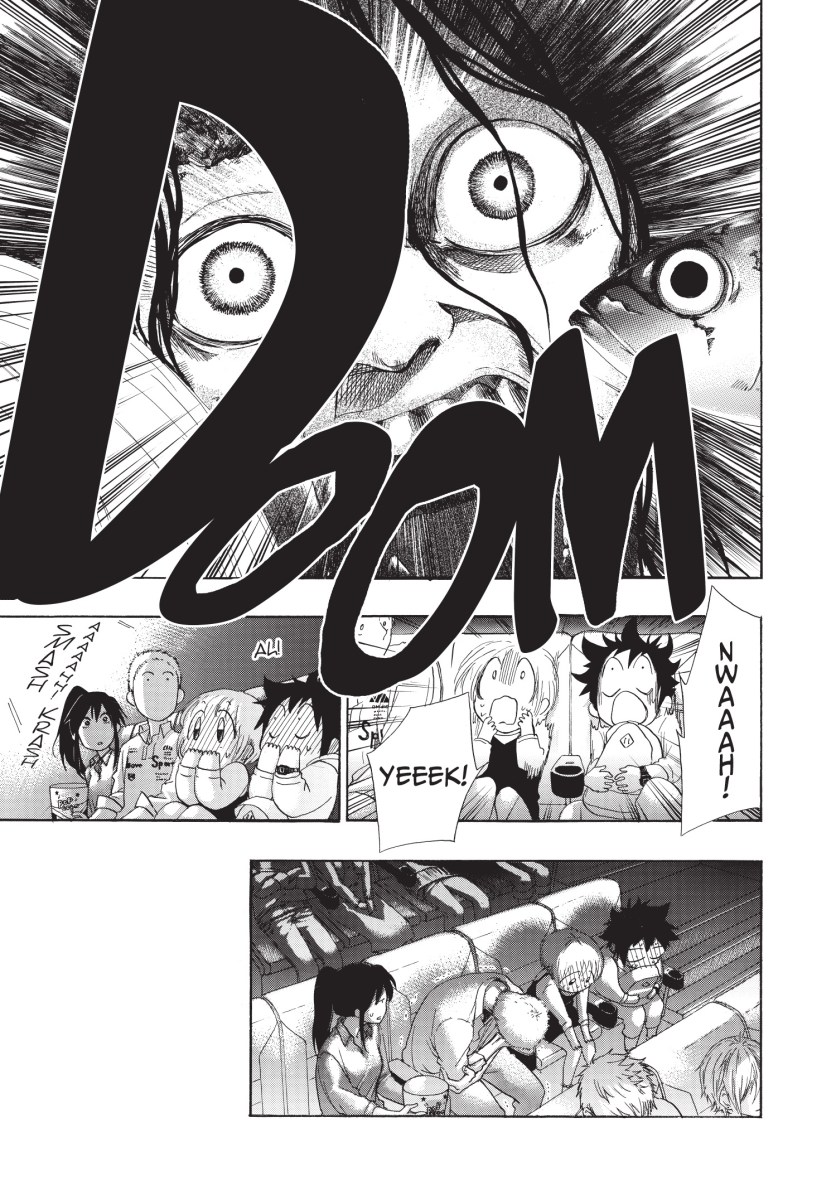 The story is mainly in Taichi’s POV as he deals with his feelings for Futaba and his uncertainty about it because he’s not nearly as impressive as Toma. However, as he “helps” Futaba with her crush, he starts rekindling his friendship with Toma, who, unbeknownst to him, has loved him for a long time.

As the kids get closer to approaching the end of high school, questions about what to do afterward spring up, giving us a painfully relatable depiction of how much pressure is put on high schoolers to know EXACTLY what they plan to do after graduation. There’s this judgment that happens if you’re uncertain, or if you decide not to go to college, and the series illustrates how stressful it to be expected to know what to do when your label switches from “child” to “adult.”

This is especially visible with Toma who, as the school’s leading athlete and most likable guy in class, is seen as having everything figured out. 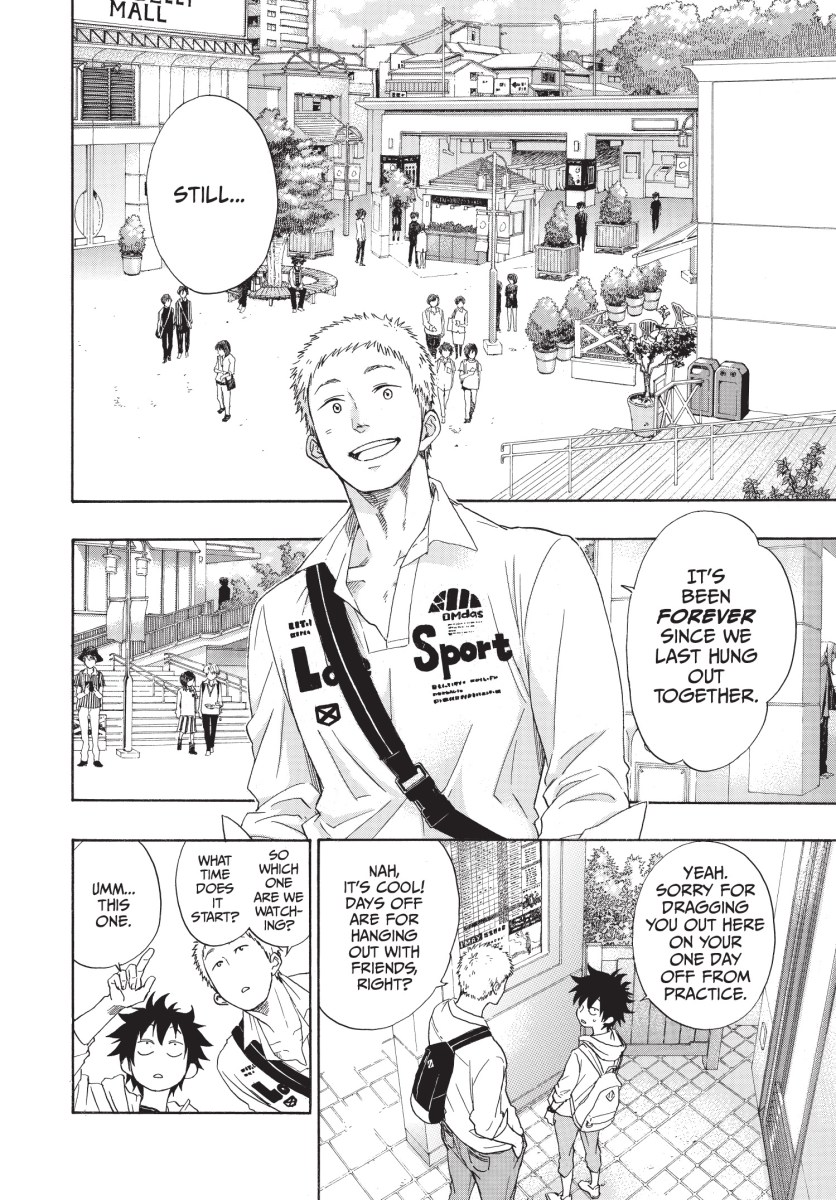 What I like about Toma is that it’s not just his sexuality that he’s worried about. While he has this “I want to be true to myself” narrative, that isn’t just about the fact that he’s in love with Taichi. He’s dealing with high expectations because “you’re so good at everything,” so much so that he doesn’t really know what he wants to do. It was nice to see a queer character be a fully fleshed-out character with concerns other than “oh my god I’m gay.”

It was also nice to see that moment when you think you’re the only queer kid, only to realize that there are others like you. I am constantly begging stories to have more than one queer character and Blue Flag delivers on that. The conversations between Toma and Masumi are different than the ones between the other characters, which is exactly how it would be in real life. I remember having a lot more honest conversations with people who knew I was bisexual compared to the ones I had with people who I hadn’t told.

There’s also a good representation of something I’ve talked about multiple times in regards to coming out: everyone is gonna react differently. Coming out is a continuous process. For me, personally, coming out on campus was easier than doing it at home. On-campus, where people didn’t know me as well, it didn’t matter as much what they thought of me. But my at-home friends? My family, who’d known me my entire life? That was harder, and everyone’s reactions were different. My mother, for example, took it well, but my father and I had a huge argument. Things are better now, but at the time, well, let’s just say that Christmas 2005 was a mess.

Blue Flag does something similar where we see a range of reactions – some positive, some negative – and, spoiler, the 6th volume ends on a cliffhanger about various reactions to Toma being gay. I imagine Volume 7 is gonna explore that more, especially since he was the popular kid that everyone liked.

I was surprised to get so much development with Toma when this is mainly Taichi’s story, especially since the series starts with Taichi not thinking much of him since he’s too cool for him now. But Taichi learns (along with the reader) that there are more layers to him.

Even Futaba, who starts out with a crush on Toma, questions whether or not it’s a crush she has or admiration. 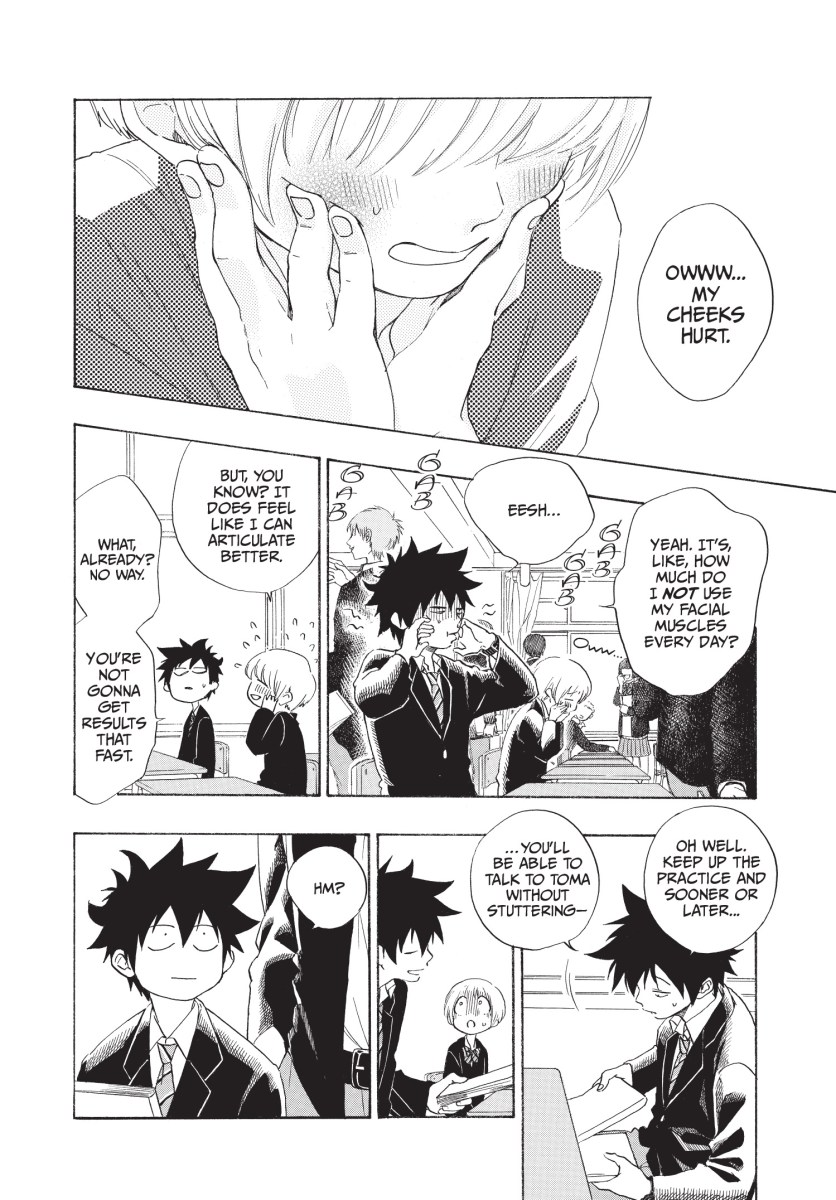 This was something else I didn’t expect. I had a feeling it would turn into “Taichi and Futaba get closer as he helps her with her crush” but I thought it would end with her deciding she didn’t want Toma because she liked Taichi. Instead, there’s a bigger focus on Futaba and her feelings beyond being a shy girl with a crush. Futaba’s billed as the klutz who can’t do anything right. She struggles to make herself more visible and questions her worth, a lot, so as we get deeper into the story she starts to wonder if she actually wants to be with Toma, or BE Toma – at least, the image of Toma everyone usually sees. She wonders if she wants him as a boyfriend, or if she just wants to be as confident, and as well-loved, as he is. I think it’s a valid plot thread to have, this mousey girl liking a boy because everyone likes that boy and discovering, as they become friends, that maybe a romantic relationship isn’t at all what she wants.

And really, why does it have to be romantic anyway? That’s the question that Mami Yagihara has.

Mami is, by far, the breakout character of this series. Playing the part as “bitchy girl in school,” she’s had a crush on Toma for a long, or so we think. Basically, she takes the “bitchy girl” stereotype and flips it upside down. She comments on other people’s misconceptions about her because of the way she looks. She (and even Futaba) go so far as saying how it’d be easier to be a guy, after all, the reason why so many people assume that Mami is out to steal someone’s boyfriend is because she’s a pretty girl who likes hanging out with guys. She gets frustrated when her guy friends end up wanting to date her because she doesn’t want to date them. She, genuinely, wants friendships. That’s it. But since she’s cute and likes make-up, it’s assumed that she wants more.

If you’re a fan of the slice-of-life genre or are just in the mood for a heartfelt series, Blue Flag should definitely be in your to-read list. There are two volumes left in the series, with volume 7 scheduled for release next month and the final volume scheduled for June. You can check out the series over at Viz today!