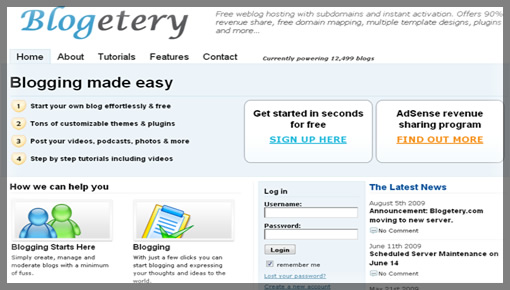 Operation in Our Sites, the new government initiative to crack down on internet piracy, has been very active of late. Popular TV and movie streaming sites were recently taken down, including the beloved Ninjavideo. And shortly thereafter, news emerged that two more sites were originally slated to be taken down but it didn’t work out: titans Pirate Bay and MegaUpload. Well now the grand total number of sites taken down by OiOS has increased by far more than two: The federal government just forced Blogetery.com to shut down. And along with it went over 73,000 blogs operated on the WordPress platform.

Internet piracy has long been a bit of a problem with Blogetery. Blogetery.com has been with host BurstNet for 7 months. On Friday July 9, the site was seemingly erased from the Internet. Then on Monday July 12, the owner received several emails from BurstNet explaining the take-down. The correspondence can be viewed here, but here’s the gist: Due to a past and present of copyright abuse, the federal government forced BurstNet to shut them down, and they’re not really at liberty to talk about it.

The real question here is why all 73,000 blogs had to go when only a small fraction of them were abusing the law, especially when BurstNet and Blogetery have previously been completely compliant when it comes to shutting down specific blogs that violate federal law. From TorrentFreak:

Due to the fact that the authorities aren’t sharing information and BurstNet are sworn to secrecy, it is proving almost impossible to confirm the exact reason why Blogetery has been completely taken down. The owner does, however, admit to handling many copyright-related cease and desists in the past, albeit in a timely manner as the DMCA requires.

And here is testimony from one poor user who just lost his personal, blameless blog:

“All of the users are without service just like when the Pirate Bay raids happened and all the people who were on the host sites were also taken down,” pointed out an annoyed Blogetery user who contacted TorrentFreak. “I have lost my personal site also and I don’t have any way to contact the owner since his contact info was on the blogetery.com site & that was the only way to contact him.”

Even if the take-down effectively hit some piracy sites, this is hardly a victory. If websites were people, you wouldn’t think killing 72,000 innocents to get 1,000 evil people is worthwhile. Now obviously that’s an incomparable example in terms of gravity, but the message still stands: If you go into a war, be it on people or on piracy, with an “anything goes” mentality, you will lose morally even if you win technically.