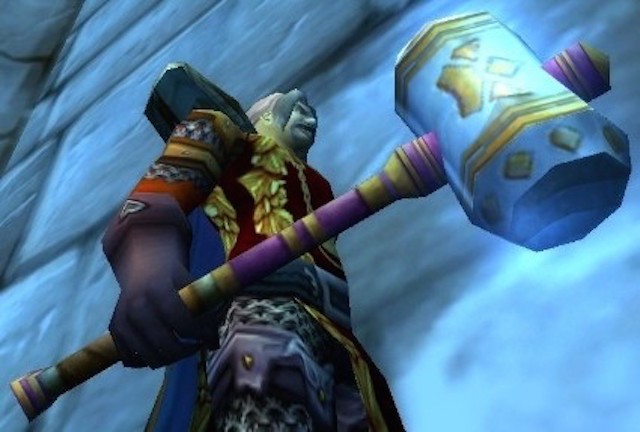 Blizzard has had it with World of Warcraft cheaters, and they’ve finally done something about a bot that has been ruining the game for rule sticklers everywhere: they banned a whole bunch of accounts.

In this case, the method of cheating they targeted was accounts that use “bot” software to automate play so a user doesn’t have to actually go through all the level grinding and resource gathering to improve their character—also known as playing the game. Blizzard would prefer that people do really have to play to reap the benefits of their hard work and made this announcement yesterday on the WoW forums:

We’ve recently taken action against a large number of World of Warcraft accounts that were found to be using third-party programs that automate gameplay, known as “bots.” We’re committed to providing an equal and fair playing field for everyone in World of Warcraft, and will continue to take action against those found in violation of our Terms of Use. Cheating of any form will not be tolerated.

If you believe that you’ve encountered a player abusing a bot, exploit, or cheat, please let us know! You can do so by using the right-click report functionality in the game, and/or by emailing information to [email protected]

And according to a support chat log, the action taken against those accounts was a (fairly lax, by Blizzard standards) 6-month ban on more than 100,000 accounts. That’s a whole lot of cheaters who won’t be bothering legitimate players anymore; and while it wasn’t mentioned by name in Blizzard’s announcement, a widespread bot called Honorbuddy has taken the blame:

It seems like Honorbuddy was detected, we are not sure, but looking at the BAN THREADS, we think that its the most likely option atm.

We are sorry for all your lost WOW Accounts, hopefully you can use them again after the 6 months ban is lifted. I have read here in the forums a bit, a lot of the accounts where 10 years old. This is a pity. We always say, do not use your valuable accounts as the risk is always there.

Some of us seem to forget the Gilder times, or were not around in 2006-2008. With Glider you knew that there where 2 software detections a year, it just happened.

With Honorbuddy you thought that we are unbeateable, we never thought that, we’ve succeeded since 2010 – Honorbuddy had not a single software detection. It seems there is one now.

It also seems that Blizzard was really pissed at our first win at the court of appeals in Hamburg. It might have been coincidental. Nothing is for sure.

You ask yourself what happens next? For now we closed our Honorbuddy Authentication, when we know any more details we will inform you.

This comes after Blizzard has taken measures to add features to the game that provide official routes for players to accomplish things they would otherwise do by cheating in an effort to make outside cheat tools irrelevant and level the playing field for everyone. Hopefully, the six-month ban will be enough to make players rethink whether or not the bot is actually their buddy.

(via Kotaku and Eurogamer)