Blizzard Made Million From Security Keychains | The Mary Sue

Blizzard Made $26 Million From Security Keychains 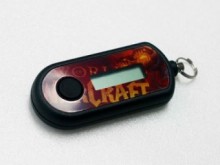 We already know Blizzard is the king of the video game world, especially after fusing with Activision and going Super Saiyan 5, but just how large is their kingly crown? Aside from owning World of Warcraft, both the bane and champion of the video game industry and MMO market, which millions upon millions of users pay a monthly subscription to play, generating an ever-flowing river of cash directed at Blizzard headquarters, Blizzard has also made $26 million on keychains.

Any gamer who plays a game set in a persistent world will tell you that they value their digital pool of riches and phat lootz, but they’ll also tell you that they are worried about their account security becoming compromised, losing intangible, though valuable, virtual property. To combat this, Blizzard had the not-actually-that-bad idea of a little security authenticator keychain device that exists in the real world — not their virtual one — which generates a one-time, six digit security code that players must enter along with their username and password in order to log in. This provides users with an added step of security that is much more difficult for the nefarious denizens of the Internet to crack.

Outsiders may laugh at this device, telling WoW players to just make better passwords and don’t tell them to anyone, but you know who else is laughing about the device? Blizzard, all the way to the bank, amirite, because they’ve made around 26 million buckaroos on the devices alone. Each keychain sells for $6.50, and around 40% of WoW players actually use them. A bit of math, and voila, $26 million. Like any MMO worth its weight in killing ten rats then collecting ten rat tails which, for some reason, one of which only seems to drop every twenty kills, Blizzard offers an in-game item to those who purchase the security keychain, an in-game pet, the Core Hound Pup.

Geekosystem Associate Editor Eric Limer points out that making so much money off that keychain is a little crazy, especially considering Blizzard could’ve just made the security authenticator an app on a phone (which exists), before ever offering an entirely separate device that only has one use.

So, at least as far as WoW players go, they value their security enough to make their login process a little more obnoxious, or at least, they really want the exclusive pet. Whichever it is, Blizzard knows just how to make money off of either desire.