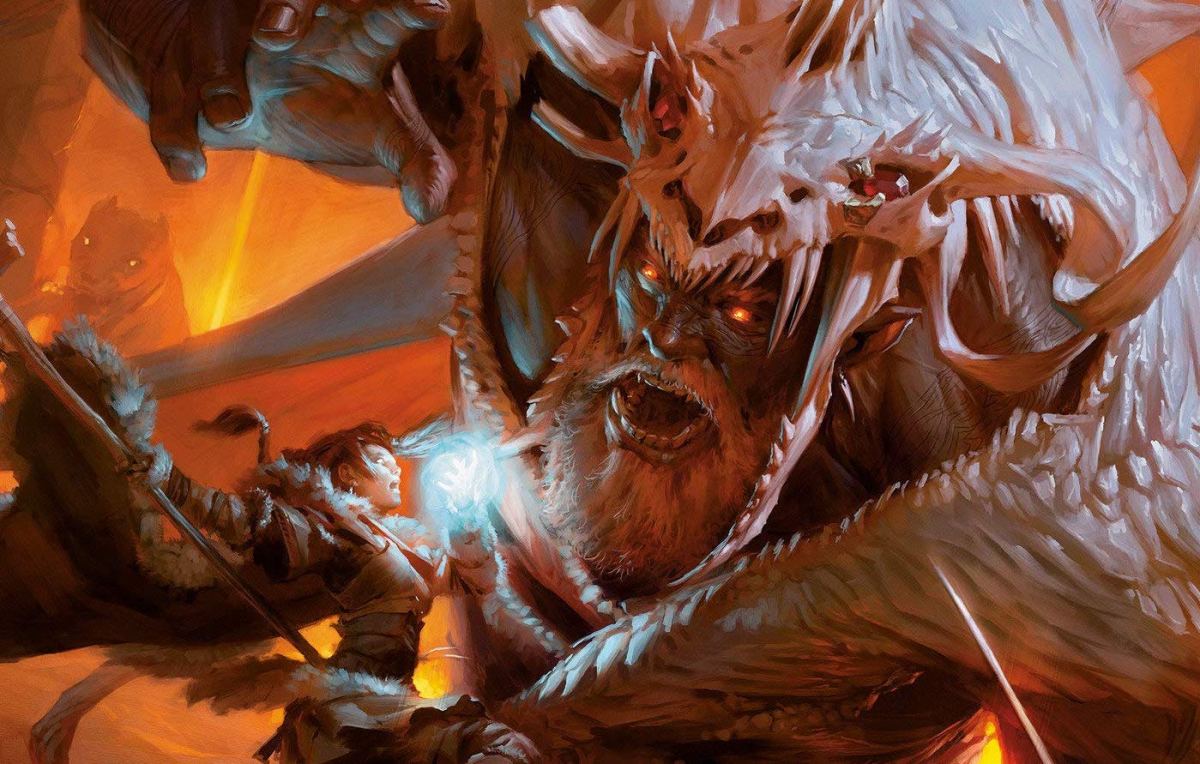 For most people, the concept of blind and visually impaired individuals playing a game like Dungeons & Dragons might seem confusing. It, and many other tabletop RPGs, are games made up of maps, dice, thick books full of rules, graphs, and stat block—all things that can be quite visual. How, then, do blind people engage in this sort of hobby? Or can they at all?

Honestly, it’s a fair question, one I had myself when I first became interested in playing Dungeons & Dragons. When I realized how many books there were, how small the miniatures were, how many different types of dice with tiny numbers there were—it all felt very daunting. I’m legally blind, and none of these things were accessible to me.

If I were to play, the amount of assistance I’d need from the dungeon master and my fellow players would be overwhelming, to the point where I worried my presence would slow down gameplay significantly. I was sure I’d be a burden—a common and, at times, near-constant fear among many disabled people. So, at the time, I deemed it a hobby I’d never be able to partake in, as sad as the thought made me.

Then, in 2017, a friend introduced me to Roll20, an online platform that serves as a digital tabletop, and everything changed. On a computer, I have the power to alter my settings—I can zoom in, change colors, and make whatever tweaks I need in order to make things accessible for my specific visual impairment. And things I lacked the power to change, my DM could: giving tokens borders with higher contrast, adjusting the lighting on a map, or—if I got lost looking for something—shifting my view in the direction I needed to be focusing.

I could roll dice directly on the platform and see my result easily, and best of all, I had a digital character sheet I could alter easily and at will, rather than a few pieces of paper I’d require another player to edit for me. And then I discovered other websites, like DnDBeyond, which made it easy to look up stats and spells online—again, in a medium far more accessible for me.

I still required a dungeon master willing to take the time to describe certain things to me and to make whatever color and contrast adjustments I needed, but even playing with strangers via Roll20’s Looking For Game system, my experience has been positive. Thanks to the websites I used, the things I needed didn’t require all that much work on their end, and now I was able to fully immerse myself in a hobby I’d once believed would be impossible for me because of my disability.

But as I got more involved in the D&D and other tabletop gaming communities, I discovered something that both surprised and excited me: There were other blind tabletop gamers, and they’d found other ways to make the hobby work for them, including alternatives that made it possible for them to play at a real (not digital) table.

“I play a lot of diceless games! I find that they put everyone on the same page with regard to storytelling,” says Elsa Sjunneson-Henry, author of the Fate Accessibility Toolkit, which will be published this summer by Evil Hat Productions. Elsa, who identifies as deafblind, has been playing tabletop games since she was a child, though she’s always found reading dice to be a challenge. So, she tackled the problem directly by finding tabletop games that either don’t use them or use them sparingly. “Also, low dice-use games, especially those that only rely on a [six-sided die] are great because low vision-friendly D6 dice are very plentiful!”

“I’m so picky about dice having enough contrast to be useful,” says Meghan Dornbrock, a legally blind illustrator and podcaster, whose podcast, Modifier, seeks to talk to game developers and players who hack and modify games, whether narratively, mechanically, or in some cases, for the sake of accessibility. Meghan, whose visual impairment is a result of albinism, has found the small numbers and low contrast on dice to be a challenge, as well: “I found a few sets that are great, but it’s a needle in a haystack to find high-contrast and cute. While this does help with impulse dice-buying, it can be frustrating, but I’d rather have dice I can read quickly, before someone at the table decides they need to ‘help’ me read.”

Aser Tolentino, creator of The Redacted Files, a long-running actual-play podcast, has also found challenges with dice, though his solutions were a bit different. “I started out using dice-rolling apps and websites, but have been fortunate enough to build a collection of Braille and tactile dice to give the game a more tangible dimension,” he explains.

“We offer the 3D printable files for our braille dice, completely free of charge for personal use on our website,” says Jess Dempsey, president and director of DOTS. “We also have Shapeways authorized to produce and sell those dice already printed if someone doesn’t have access to a 3D printer. If an organization is looking to get items donated, we’d love to welcome them into the DOTS Family! There is a sign up sheet on our website.”

The DOTS RPG Project was started in August of 2017 by Jack Berberette, in an effort to make tabletop gaming easier for a close friend who was blind. Since then, the nonprofit—which runs primarily off fundraising and donations from the public—has earned 501(c)(3) charity status and been featured in multiple media outlets, and according to Dempsey, the organization has many plans for ways to expand.

“At this time, we are only donating the dice, but hope to sell in the future for less than the cost of Shapeways. We don’t have the ability yet to mass produce, so we’re limited to how many we can offer to individuals. Our priority right now is to get them to places with lending libraries so they can reach a wider range of individuals,” Dempsey said.

DOTS is also working on another issue that many blind players face when engaging in tabletop gaming: the books. So many tabletop games, including D&D, come with large tomes full of rules, monsters, spells, etc., and that’s not to mention the artwork. DOTS has been working with game publishers to produce braille transcriptions of game books to be distributed exclusively to DOTS Family members who request them for use in lending libraries. The transcriptions will also include image descriptions.

That’s great news, because blind and visually impaired tabletop players are constantly looking for a variety of solutions to the issue of reading these books. While, for me, digital PDFs have proven to be an accessibility life saver, this isn’t the case for all players.

“It can be a chore,” says Meghan. “I can’t read screens for a long time, so PDFs are out. Physical books are better, but often, the meatier systems will use very small fonts and/or poor contrast between the page copy and the cool textured background image, and then there’s the weight of some of these tomes that I have to hold very close to my face to read. I just can’t have good posture and read an RPG book, so I don’t read them as much as I’d like. That sure makes running or playing a lot harder!”

Other solutions to the issue of reading are starting to crop up, as well. DOTS has been working with DnDBeyond to make their site and app more screen-reader accessible, which is great news for those blind players who require such technology when looking up spells or rules, or building characters on the website.

Some blind players, like Meghan, have also suggested the possibility of audio versions of these books. “I’ve talked to some folks about audiobook versions of games and what that could look like that I think is really cool! But again, it’s mostly the [independent game developers] and the special interest groups doing this work. I’d love to see the bigger publishers take this stuff seriously and offer accessible materials.”

Luckily for the blind tabletop gaming community, this appears to be happening now. In June of this year, D&D publisher Wizards of the Coast announced on the official Dungeons & Dragons Facebook page that they had released a version of the 5th Edition Player’s Handbook in a fully navigable audio form via the National Library Service for the Blind and Physically Handicapped. The publisher also announced that they’ll be creating a similarly accessible version of the Duneon Master’s guide and the Monster Manual.

As for accessible, digital versions of materials, other publishers are making an effort, as well. “Some notable callouts for awesome support I think would be in order, such as for Evil Hat and Pelgrane, who put their flagship titles up in a variety of electronic formats like ePub, and Monte Cook Games, which produced an electronic variant of Invisible Sun when we reached out to them about accessibility concerns,” says Aser, whose podcast has led him to play in a variety of tabletop game systems over the years.

But while a lot of progress has been—and will hopefully continue being—made with regards to accessible options for blind gamers, some of the biggest challenges can be faced at the actual table, whether virtual or physical.

“I find that, for a long time, I’ve experienced players who don’t want to slow down, who want to play the game they way they’ve always played it, without having to adjust,” Elsa explains. “I also have pushed pretty hard, in every gaming group I’ve ever participated in, to stop using blindness as a negative trait, which has been met with some stubbornness.”

No amount of resourcefulness or accessible materials or technology can overcome ableism, and while myself and most of the other blind players I’ve encountered have had overall positive experiences with tabletop gaming, we’ve all had negative and frustrating experiences, as well. As the blind and visually impaired population grows, it’s important that game masters and other players help to make their table an inclusive environment—not just for visually impaired players, but for all players.

“I think something to keep in mind when addressing the needs of someone at your table is that it should be something that happens for everyone at your table,” says Aser. “It’s pretty easy to tell I’m blind—the guide dog sort of gives it away—but a lot of people who might experience a challenge with your game won’t be so easy to identify, whether that’s because of a hearing impairment, reading disability, social anxiety, or a need to take more frequent bio breaks. When you run a game, you’re on point when it comes to making sure everyone is having a good time, and the best way to do that is to keep checking in with people.”

It’s easy to assume that tabletop gaming is a hobby that won’t appeal to blind and visually impaired people, between the books, the tiny dice, and all the other visual elements. In reality, however, blind gamers are determined and resourceful, and the options making it possible for them to play and run games are expanding every year. There’s still plenty of room for improvement, but it’s exciting to see these strides being made as the visually impaired gaming community expands.

(featured image: Wizards of the Coast)

Kody Keplinger (@Kody_Keplinger) is the author of several books for kids and teens, including The DUFF and That’s Not What Happened. She currently lives in NYC, where she teaches writing classes at the Gotham Writers’ Workshop.