Before we dive in, you should know there will be SPOILERS in abundance below. Read at your own risk.

The 1982 cult classic notably stars Harrison Ford as a burnt-out cop named Rick Deckard who hunts down fugitive replicants—bioengineered beings with superior strength, little (or no) humanity, primarily used for labor—in a dystopian Los Angeles during the year 2019. It’s fair to say the plot of the movie is layered at best, complicated at worst. The multiple re-cuts and releases over the years do not help with that, so we’ll focus on the basics. Blade runners, like Deckard, are tasked with tracking down replicants and ‘retiring’—killing—them. In the original film, Deckard is faced with hunting down replicants who have begun to display human emotion, including a replicant named Rachael, for whom he ultimately develops feelings.

The big question on everyone’s mind is how could this long-awaited sequel do so poorly? The short answer: women. Women who are tired of poor representation, tired of being set dressing, just plain tired.

The ultra-secret plot of Blade Runner 2049 boils down to this: The true mark of humanity is the ability to have a child, and two factions are racing to obtain information that will allow replicant women to conceive for vastly different ideological reasons. Ryan Gosling plays Officer K, a new blade runner, who uncovers the bones of a replicant who died in childbirth. It’s quickly revealed that the baby was conceived by Deckard and Rachael. The discovery that the replicant gave birth, something that was previously thought impossible, sends him headfirst into a major cover-up.

The film has, in my mind, the perfect creepy villain in Jared Leto’s Niander Wallace. Wallace is the manufacturer of new replicant models, has a major God complex, and is obsessed with learning the key to replicant reproduction in order to more easily produce slave labor. Wallace’s sole focus on replicant women essentially becoming living incubators is an evil plot, but not one person (human or replicant), ever questions the idea itself. There’s no outlying perspective, no clarification of how this is a horrific mistreatment of women’s bodies (engineered or not). In fact, even the supposed good guys are only interested in how they can obtain this information for their own needs, rather than because using women as incubators is objectionable.

This movie is obsessed with the idea of women, and I don’t mean that in a good way.

Women adorn every piece of the setting. From giant, neon billboard ads, to crumbling giant stone statues of submissive women in sexualized positions, who are completely nude save for high heels, to naked (replicants) being used for sex in the not-quite-foggy-enough-to-obscure-their-bodies windows of a brothel. The female form, often naked or sexualized in a heightened manner, is inescapable. 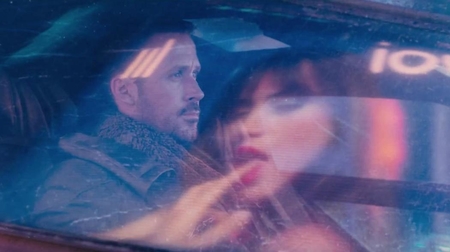 A questionable plot and uncomfortable setting is one thing. Bad representation is a bigger hurdle, and one this film crashed into headfirst. Throughout the nearly three-hour philosophy lesson, we are presented with the idea that women are only there to help move the story of men forward, rather than act as protagonists in their own right in a story very much about oppression against them. And while women are sidelined in favor of male protagonists, people of color and LGBTQIA individuals are ignored altogether. The white male savior narrative is firmly in place.

In the first half of the film, we see K in a relationship with a holographic program named Joi, whom he can carry around with a hand-held device, all of which would take another full essay to dissect. Joi has very little, if any, true agency as a character. She’s a programmed hologram that will be whatever K needs her to be, so he has his perfect fantasy woman. She is a literal product designed for the happiness of men.

Even the limited moments of agency she exhibits are for the pleasure of K. At one point in the film, Joi hires an escort, who we later learn is also a replicant, and “syncs” over her body so that K can have sex with “her.” There’s a lot to unpack here. Namely, the act of using, truly using, a woman’s body solely for the pleasure of a man—an act that is treated as commonplace and not at all outside the realm of normalcy. In fact, everyone involved acts as though this is something that occurs frequently in this society. The takeaway is that the body of a woman (even a replicant woman) is simply a vessel for man to use as he wants, when he wants.

On the complete flip side of Joi, we are faced with Luv. She’s Wallace’s right hand and his enforcer. Luv is arguably the major antagonist of the film, despite Wallace’s more obvious villainy. It is Luv who hunts down K and Deckard, and Luv is the one to physically bring down almost every person standing in Wallace’s way, woman and man alike. Luv is presented as the epitome of Wallace’s replicants: no humanity, no empathy, following out her orders to their deadly letter. She is the puppet at the end of his strings. Even the one brief moment of possible complex characterization—Luv’s kissing K after stabbing him—is nothing more than her mimicking the actions of Wallace earlier in the film.

When the movie made the big reveal that K was not the long lost replicant child, but that the child was in fact a girl, I thought maybe we were going to see a redemption moment. Instead, Ana is a woman trapped in a literal bubble of safety, locked away from the entirety of the world. Her only scenes in the movie are to teach K about the method of making memories, a job she performs for Wallace to implant false memories of a full life into the replicants. We never see her reaction when Deckard finds her at the end of the film. We never learn if she suspected what she was, and we never learn who she is at all, outside of being a memory-maker for replicants.

I’ve seen the reviews and thinkpieces that say anyone who hated the movie just didn’t “get it.” And they’re right.

I don’t get why we keep allowing films to portray women as nothing more than objects in the stories of men.

We do not create media in a vacuum, just as we do not consume it in one. The excuse that this film is a continuation of an older original, so of course it doesn’t have today’s viewpoints, does not cut it. There is no excuse in this day and age for filmmakers to continue using an entire gender as objects with zero repercussions or acknowledgement of why that is—as well as ignoring the existence of people of color and LGBTQIA. Women are continuously fighting to be heard, to have a voice in our own narratives, to be in control of our own world. To see ourselves on screen as less than fully realized people, to be treated no better than set dressing, is not going to cut it anymore.

Lauren Jernigan is a nerdy bibliophile in NYC who spends too much time posting photos of her cat. She works as a Social Media Specialist and is online more than the average person sleeps. Follow along as she live-tweets her way through life: @LEJerni13