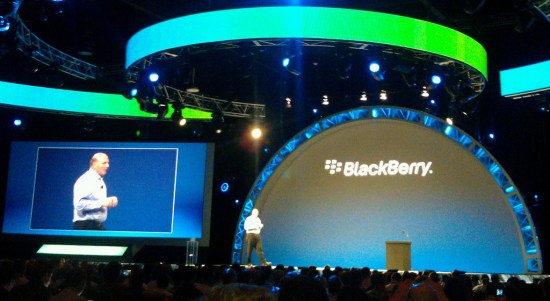 At Research in Motion (RIM)‘s BlackBerry World conference today, Microsoft CEO Steve Ballmer announced the beginning of a new, significant partnership between the two companies. Ballmer said that Microsoft will “invest uniquely” in forthcoming RIM devices by baking in Bing search and location functionality at the operating system level.

From now on, Bing will be the default search engine in the BlackBerry web browser. Users will be able to change this setting, but Bing will likely expect to see a boost in user base from those satisfied with its performance, or just uninteresting in changing the devices settings. Additionally, Bing will be the default location app for new BlackBerries shipped to mobile carriers. This part of the deal has a major caveat, as the mobile carriers can sign separate deals with Google and supplant the Bing support.

Microsoft is likely hoping that another facet of their new deal with RIM will help offset changes to the default settings of new smartphones by prominently featuring Bing in the BlackBerry App World. These close ties between the trusted BlackBerry platform and Microsoft’s services might also boost user’s confidence in Bing, which recently captured only 13% of web usership.

The partnership might seem an odd one, as RIM and Microsoft are rivals in the smartphone arena, but in the bitter war for smartphone dominance it could be a case of “the enemy of my enemy is my friend.” This seems especially true of Microsoft and RIM, whose mobile products are in very unique situations. RIM, for instance, was an early dominator of the market and snapped up the corporate and governmental slices of the user base. Though its numbers have been shrinking as of late, they still have posted good earnings and can likely chalk those losses up to users that wanted an iPhone/Android experience before such devices were available.

Microsoft, on the other hand, has been involved with mobile devices since the old days when Palm ruled the playing field. Their foray has been less than successful, and the company has pinned all their hopes about surviving in the mobile market on their Windows Phone 7 OS. As The Next Web points out, this is a product that must win for Microsoft. They’re heavily invested, and likely cannot afford to try again from the ground up if WP7 flops. They’ve tried to take down big competitors before, as with the Xbox and the Zune, and have had mixed success.

What’s motivating the deal likely has more to do with Microsoft’s standing in the corporate world not for their mobile devices, but their desktop and email software. Microsoft understands that despite loosing some ground, RIM is not going anywhere; not as long as entrenched CEOs and security-minded government clients are already comfortable with RIM devices. And the deal to bring WP7 to Nokia devices seems aimed solidly at Android and iOS, which have enjoyed a healthy portion of the market outside the office. With Windows already owning up most of the corporate world’s desktop, partnering with RIM is the best way to get a slice of the corporate mobile market.

Though they seem like strange bedfellows, RIM and Microsoft could be rallying to hold their stop spots and possible pave the way for continued growth for the two companies. We won’t know for some time, but it’s clear that BlackBerry isn’t going to be the same.