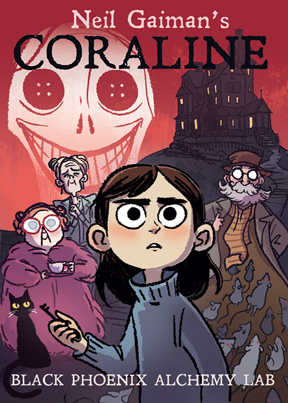 Black Phoenix Alchemy Lab have created body and household scents inspired by Hellboy, Fraggle Rock, Labyrinth and more. Their latest pulls from Neil Gaiman’s delightful Coraline. “The Coraline Collection” is based on locations and characters from the book like Miss Spink and Miss Forcible, The Cat, and the Mouse Circus. BPAL writes, “This is a charitable, not-for-profit venture: proceeds from every single bottle go to the Comic Book Legal Defense Fund, which works to preserve and protect the First Amendment rights of the comics community.” And you might have noticed, the artwork for the collection was done by Eisner Award and Harvey Award winning cartoonist Vera Brosgol (creator of Anya’s Ghost).