FOR THE GLORY OF WAKANDA. 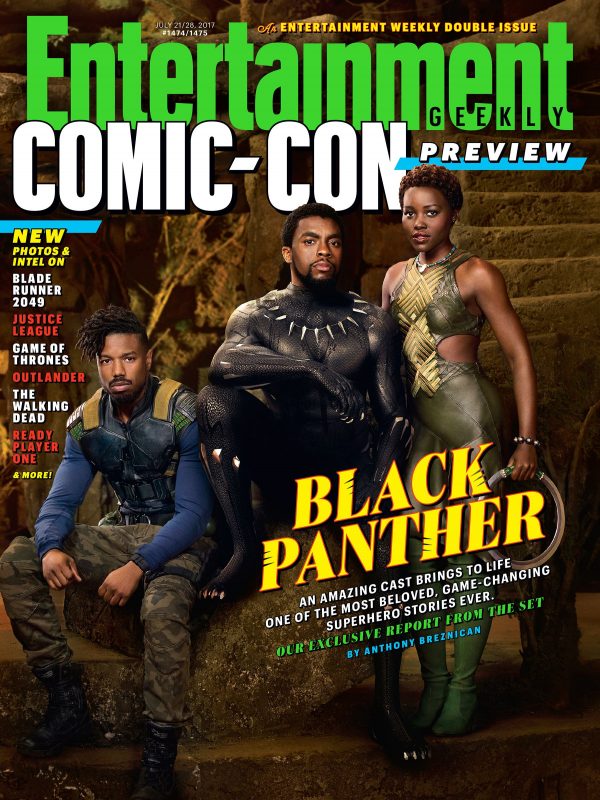 Entertainment Weekly is featuring Black Panther on their Comic Con preview issue, and please hold me while I attempt to parse all of this new information because it’s so goddamned beautiful.

Okay, okay, deep breaths, let’s dive into what we’ve got here. First of all, this stunning cover shot of the movie’s principals: the always badass Michael B. Jordan, who plays the impeccably named baddie Erik Killmonger, Chadwick Boseman as T’challa, the Black Panther and my lawfully wedded husband, and Academy Award winner and savior of humankind Lupita Nyong’o, in the role of Nakia.

From the EW article, we learn more about Nakia—who has been named before as a member of the all-female royal guard the Dora Milaje. Now we know that she’s also a “covert agent whose job is to stifle word of Wakanda’s secrets, hunting down its enemies with deadly force.” YES. YES SHE IS. SHE IS AND SHE DOES THAT.

Another delicious detail about the movie’s characterizations—and some truly gorgeous shade—comes courtesy of EW’s write-up on Killmonger, who’s described as “a dissident from the country and aspiring prince who has colluded with a hostile foreign adversary in a bid to bring down the rightful heir to Wakanda’s throne.” How topical! Director Ryan Coogler (Creed, Fruitvale Station) expands on that theme: “In this movie, a lot like politics, it’s a little tricky to define who’s [a good guy] … The film very much plays with those concepts, looking at conflicts and different motivations, and who’s with who.”

First of all, I am on record as saying there is nothing that I love more in life than an ambiguous villain with deeply-felt motivations, so I cannot wait to see what they do here. Jordan is a frequent collaborator with Coogler and I know they are going to do Killmonger justice and make him fascinating and complex. Second of all, that Coogler right out of the gate is saying that the movie explores a plurality of perspectives and isn’t simply good guy vs. bad guy makes me so excited I could scream. HOW GOOD IS THIS FILM GOING TO BE, MY FRIENDS.

Here’s an overview from EW on Black Panther‘s overarching plot:

In self-defense, Wakanda has closed itself off from the other nations of Earth, maintaining a false front that it’s a mere third-world nowhere – full of mines, farms, and jungle creatures. The truth is, its mines produce the rarest, most precious metal on earth, its fields grows the Heart-Shaped Herb, a Vibranium-enriched plant that grants its leaders superhuman strength, and its jungle creatures provide inspiration for one of the sleekest superheroes to ever leap from the page to the screen.

[…] The enemy Killmonger has aligned with is Andy Serkis’ Ulysses Klaue, the Vibranium poacher last seen having his arm sliced off in Avengers: Age of Ultron. He has replaced the appendage with a piece of sonic mining equipment stolen from Wakanda, but the real danger is what he could tell the outside world about the nation’s secrets.

With Klaue and Killmonger joing forces, T’Challa already faces an ominous external threat, but there is also unrest among the tribal leaders of Wakanda, who fear the young king is repeating his father’s mistakes by engaging too much with the outside world.

[…] Wakanda has never been conquered. But that doesn’t mean ruin can’t come from within.

Courtesy of Comicbookmovie, here’s a few more pictures that made me claw at my screen this morning: 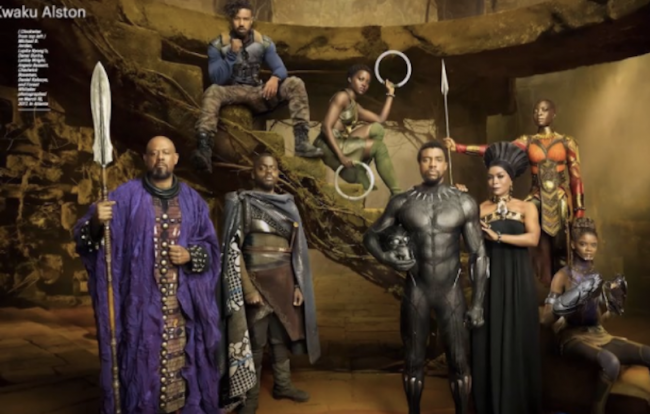 WHEN ANGELA BASSETT IS PLAYING YOUR ROYAL MOTHER YOU KNOW EVERYTHING IS GOING TO BE OKAY.