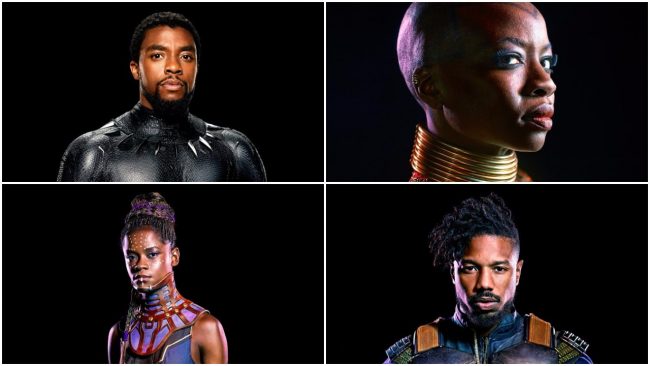 Ruth E. Carter is a longtime costume designer whose work has appeared in movies like Selma, Amistad, Malcolm X, Crooklyn, Love & Basketball and the History Channel’s Roots series, among many others. I’ve been excited about Black Panther‘s costumes since our first glimpses and this week, new photos and details from the film had me shrieking. Now Entertainment Weekly has released close-up portraits by photographer Kwaku Alston that show the stunning cast clad in their soon-to-be-Oscar-winning outfits.

Take a look and try and tell me this isn’t some of the best costuming you’ve ever laid eyes upon:

“Chadwick Boseman is photographed in T’Challa’s obsidian-colored, Vibranium-woven armor as the hero of this Marvel Studios movie.”

Yes, yes he is, and I can safely say woven Vibranium has never been worn better. The detail that went into this costume is just mind-boggling, and I would like to ask Chadwick Boseman what it was like to wear it. A reminder that Vibranium is the made-up Marvel metal that also comprises Captain America’s shield, and Wakanda’s Vibranium is particularly unique. Per Wikipedia:

“A different variety of Vibranium found in Wakanda absorbs sound waves and other vibrations, including kinetic energy. Absorbing sound waves, vibrations, and kinetic energy makes this metal stronger. It was discovered by the Wakandan king T’Chaka, father of the Black Panther T’Challa. To protect this resource, he concealed his country from the outside world. T’Chaka funded his country’s education by occasionally selling off minuscule quantities of the metal. As a result, Wakanda is one of the world’s most technologically advanced nations.” 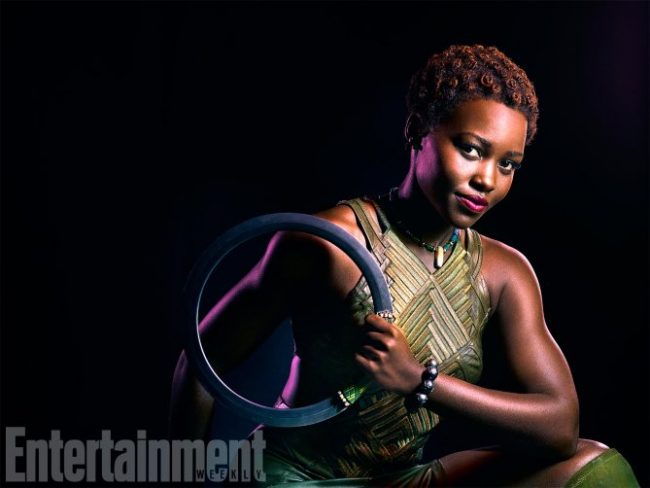 Lupita Nyong’o’s undercover agent, Nakia, is one of Wakanda’s “top spies,” and here we get a closer look at her impossibly cool (and deadly) signature ring blades. While Nakia is globe-trotting in Wakanda’s defense and kicking ass and taking all of the names, she also has an eye for fashion.

“I would say Nakia is very practical,” the Oscar-winner says. “She dresses for the job at hand, but she doesn’t compromise her style.” 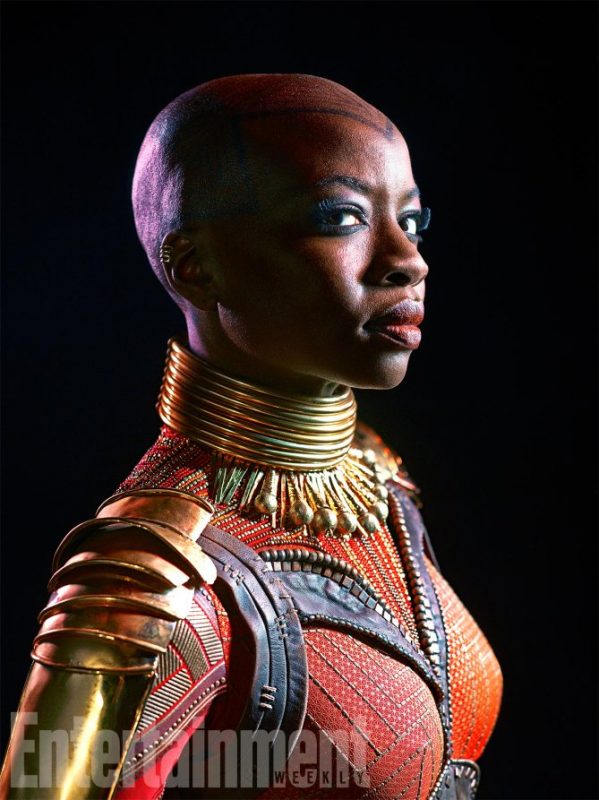 “Danai Gurira is going to steal every scene that she’s in is the head of the Dora Milaje, the all-female secret service to T’Challa,” says Marvel Studios president Kevin Feige. Here, The Walking Dead actress is seen in Okoye’s ornate uniform as part of the order, created by costume designer Ruth E. Carter.

Danai Gurira is an absolutely brilliant actress and playwright, and I cannot wait to see her in action. I couldn’t have imagined Black Panther without her playing a part, and her Okoye is apparently In Charge and immensely scene-stealing. Gurira is an alum of my college, Macalester, which should really consider putting up a statue of her on campus. 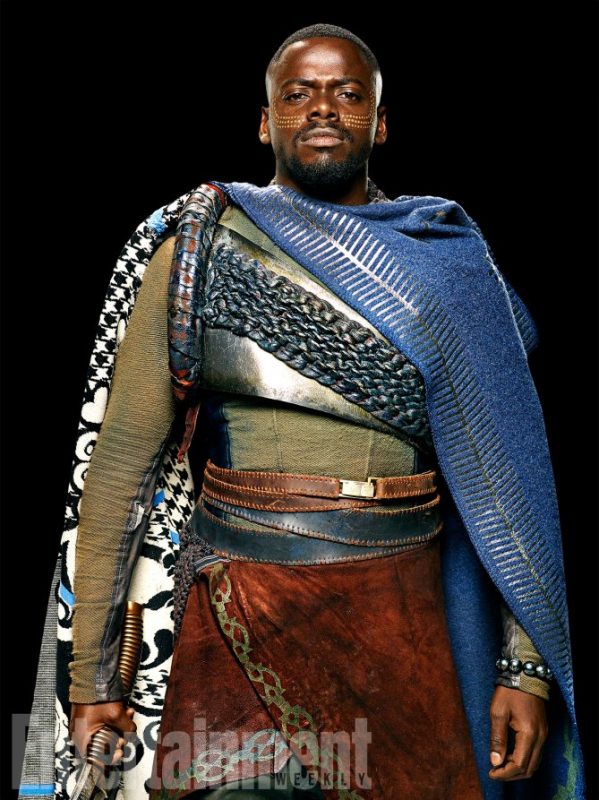 Get Out star Daniel Kaluuya plays Black Panther’s best friend, W’Kabi, the head of security for the Border Tribe …As T’Challa ascends to the throne, he asks W’Kabi to serve as an advisor, trusting his friends knowledge and instincts.”

LOOK AT THIS STUNNING COSTUME. It’s eminently practical and functional for a head of security, but pops with brilliant colors and prints. I would also like W’Kabi to be my best friend. 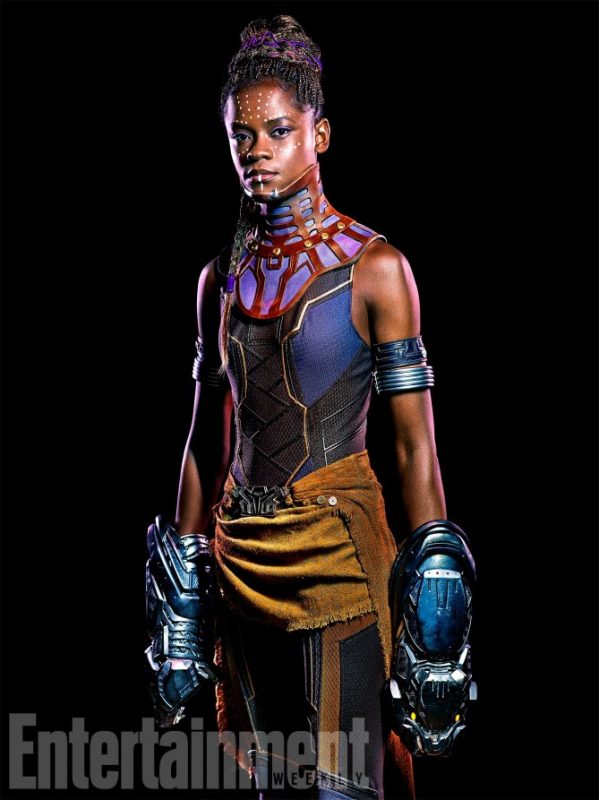 I am most excited to meet Shuri—in the year of Wonder Woman, I’m glad Marvel is also introducing a new brilliant and inspiring young woman into its movie universe. Is there anything Shuri can’t do? Not from her portrait description:

Letitia Wright plays T’Challa’s sister, Shuri, who crafts weapons like the Vibranium-enhanced panther gauntlets on her hands. “She is also a genius and runs the entire Wakandan design group,” Feige says. “She’s responsible for amazing technological advances that Vibranium has brought about from Wakanda.”

It sounds like Shuri is Wakanda’s Tony Stark, only better. AND CAN WE TALK ABOUT HER COSTUME AND THE PANTHER GAUNTLETS. PLEASE. 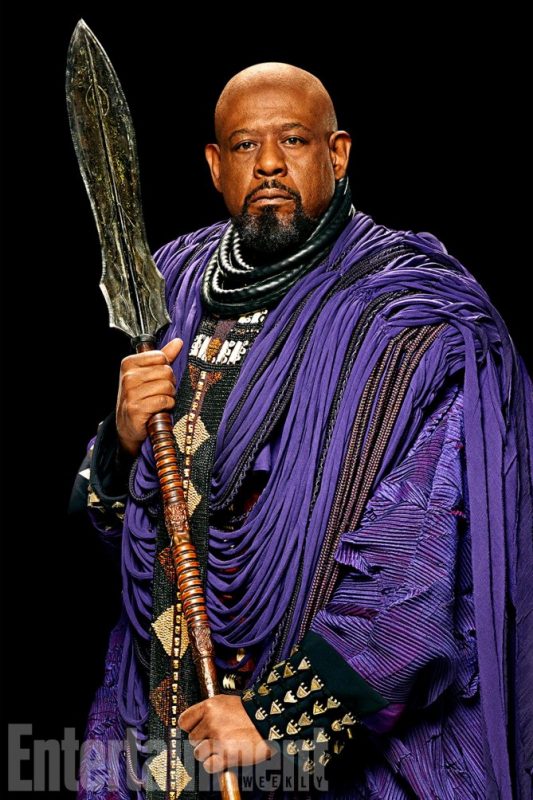 I’m pretty much living for Forest Whitaker’s whole look here, which is brimming with power.

“He’s somewhat a religious figure or spiritual figure,” director Ryan Coogler says of Forest Whitaker’s shaman character, Zuri. “Forest’s character, more than anything, is a major tie-back to T’Challa’s father. Zuri is someone he looks to for guidance.” Coogler says to think of him as the Wise Old Man — Black Panther’s version of Obi-Wan Kenobi. 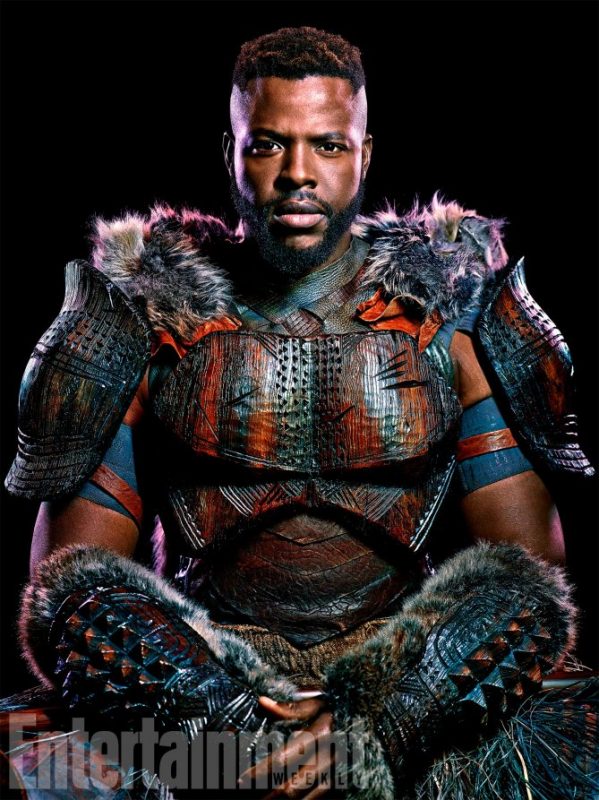 Is this the most incredible costume of all? It’s up there for me. Meet M’Baku.

Winston Duke (Person of Interest) plays another leading figure in Wakanda who poses a threat to T’Challa. What the panther is to the royal family, the gorilla is to M’Baku’s mountain tribe. “The idea that they worship the gorilla gods is interesting because it’s a movie about the Black Panther who, himself, is a sort of deity in his own rights.”

EW also has an interesting report on how the production has updated M’Baku’s comic book villain character, Man-Ape, “to avoid unintended racial stereotypes.” The re-envisioned costume is outstanding. 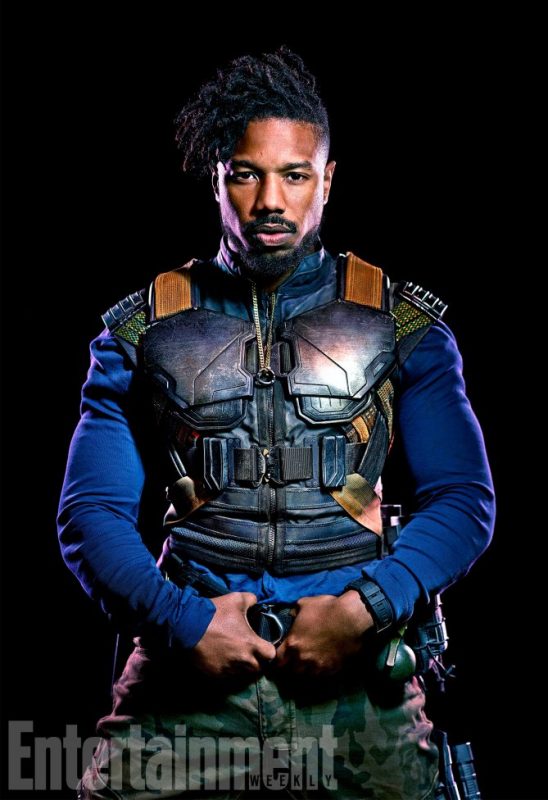 [Erik] Killmonger is an exiled dissident from Wakanda who believes T’Challa will be too weak a ruler. “Something we felt was important was that Wakanda wasn’t treated monolithically, meaning everybody agreed to do the same thing all the time,” Moore says. “Wakanda has a lot of citizens who have a lot of different ideas of Wakanda should be. Killmonger is a voice of a different side of Wakanda.”

I’m having a lot of Erik Killmonger emotions just from the pictures that have emerged of him, and actor Michael B. Jordan’s track record of being wonderfully dynamic on-screen. As Killmonger, Jordan already projects confidence and menace. And the bright colors Carter has clad him in here are a refreshing change from the dull and dark outfits we often see on antagonists. I also need to know a lot more about that ring that he’s wearing. 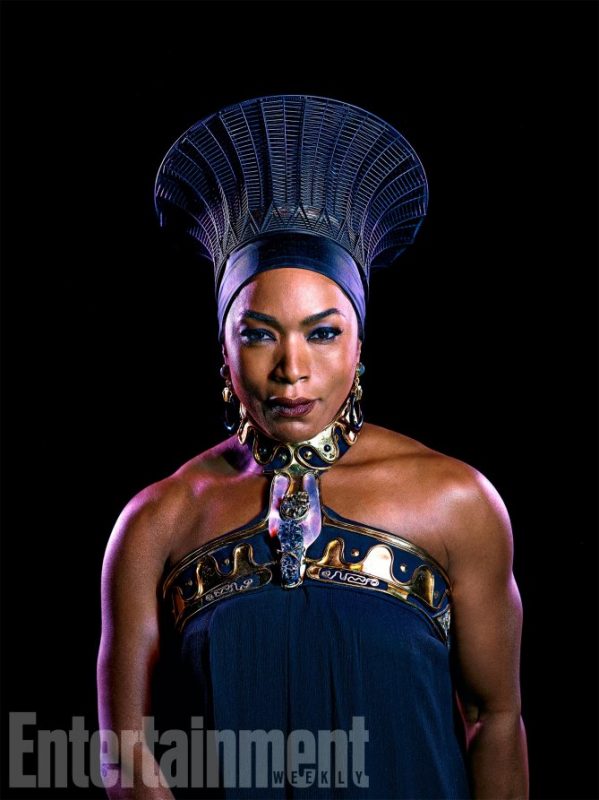 The Internet erupted into gleeful screaming when the always regal Angela Bassett was cast as T’Challa’s mother, Ramonda.

Angela Bassett is Wakanda’s queen mother, as vital to T’Challa and Shuri now as when they were children. “Her goal in the film is to help T’Challa become king of Wakanda in a peaceful transition of power, serving as a de facto advisor to the throne,” Moore says. “However, as things get complicated for our hero, she sets aside any political functions and instead operates as a mother whose sole concern is the physical well-being of both of her children.”

I don’t think I’m reaching when I say I’m sure Ramonda has some unexpected moves and abilities up her, well, sleeve. In the meantime, I am bowing down to this entire look. ACTUAL QUEEN.

Beyond a shadow of a doubt, this is the finest costume work we’ve seen from Marvel Studios, making The Avengers‘ get-ups look like something sampled from a Halloween store by contrast. It’s evident that not only vast amounts of time and care have gone into the costumes’ creation, but that they are imbued with a ton of research and cultural symbolism. I can’t imagine that Ruth E. Carter won’t be nominated for many awards for her dazzling creations, and if she doesn’t win that Oscar, I’ll be over here snacking on some Vibranium.

Which costume is your favorite so far? Can you even imagine the future cosplays? I can’t wait.