Black Lightning: “The Resurrection” Has Begun 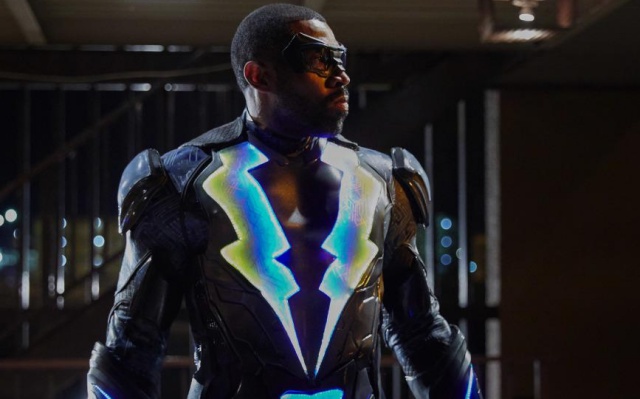 What’s good everyone! Last night, we witnessed the resurrection of Black Lightning on the CW.

The character is a technically part of the Arrowverse brand, but not a part of the universe that the other characters’ stories take place in, which works for me—no worries about crossovers or anything like that, just a solid, self-contained storyline. In the series premiere, we’re introduced to Jefferson Pierce, his bad-ass daughters, and the gang-infested city of Freedland. Black Lightning is here.

**THIS IS A RECAP/REVIEW – BEWARE OF SPOILERS.**

If there is any show that serves as a good comparison to Black Lightning, it would be Marvel’s Luke Cage. In both series, you have a black superhero who is trying to live an upstanding life without using his powers and is pulled back into the life by outside, gang-related forces. Our hero, Jefferson Pierce/Black Lightning is a retired superhero who has decided to focus on saving his community, not by donning a costume, but by being a principal at a local high school, he raises his daughters, Anissa and Jennifer, to be exemplary figures in city slowly being consumed by the escalating violence of the 100 gang.

The episode opens during a storm, with Jefferson and Jennifer waiting to bail out Anissa, who was arrested as part of a protest against the 100 gang. During their ride home, they’re pulled over by the police, and two white cops harass Jefferson, order him out of a car to be identified. When asked what the hell they’re thinking, the cops say a liquor store was just robbed. It’s when Jefferson confronts the cop about the ridiculousness of this profiling (he’s wearing a suit and driving a family car with his daughters inside) that we get the first glimpse of the rage and lightning under the surface.

It’s rare to see superheroes be adults, and I don’t mean that in terms of age—I mean in the sense of responsibility to something bigger than just “a mission.” With Jefferson, he wants to give back and protect people the best way he can, but he has also been putting his family first for the past nine years. As we are introduced to his ex-wife, Lynn Pierce, and the episode unfolds, we see that it was Jefferson putting his mission before his family that led to the breakup of their marriage. 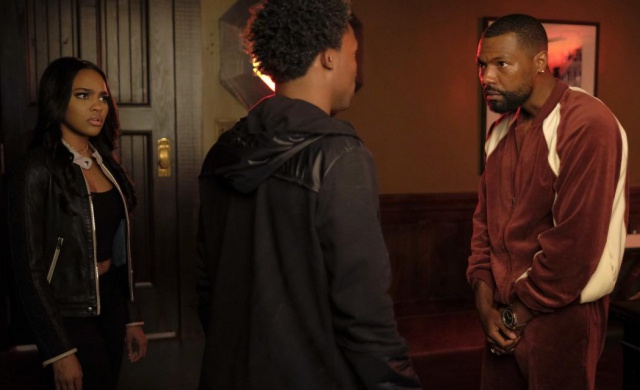 Jennifer, played by a personal fav of mine, China Anne McClain, is the rebel child much like her sister, except she’s rebelling against being seen as “the Queen of  Garfield High School” and the perfection thrust upon her. While it may be easy to dismiss Jennifer as being a brat, I think she’s simply trying to assert her independence in a structure that expects her to be the talented tenth when all she wants is to be a kid.

While sneaking off to a party, with her big sister’s help, she ends up running into a 100 gang member by the name of Will, who owes money to Lala, one of the head gang leaders. Will proves himself to be a punk real quick, acting as though Jennifer is his girlfriend, and even goes along with an offer to pimp her out to pay off his debt. Jennifer knees him in the crotch.

Realizing that his daughter is missing, Jefferson leaves, and Black Lightning turns up quickly, absorbing the electricity and lighting up the place. He’s shot in the process, and while escaping, he’s held up by two police officers. When they attempt to taser him, he absorbs the electricity and fires it back at them, destroying a cop car in the process. He retreats to the home of his father-figure, mentor, and tailor, Alfred … I mean Peter Gambi. Gambi stitches him up and reassures Jefferson that he did the right thing, because the people still need Black Lightning.

Things escalate when Will’s dry self stalks Jennifer to school the next day to see if they are “cool.” Bruh, you tried to pimp her out after knowing her for two minutes, and she kneed you in the balls. Those are very explicit clues to go f-yourself. He tries to grab up on her, but big sis Anissa lays him out like a punk.

Before Will can pull a gun, Jefferson talks him down.

Jefferson decides to handle the situation by going to Lala, a former student of his, to seek help in stopping Will from returning and making a big mistake. Instead, the episode makes it clear that Lala’s role in this story is not just to be a cliche drug dealer gang member, but to be a mirror to Jefferson. While Jefferson wants to make a difference by giving kids a good education and safe environment, Lala is also, in his own way, trying to look out for the kids who sell drugs for him. His rant about the white kids they sell drugs to running the world is filled with anger and rage at the system. While he’s beating down a child for being on his phone and not pushing harder, you can see that what he wants to do, misguided though it may be, is toughen these kids up for the darkness of the world. It doesn’t make him right or good, but it does make him more interesting. He pulls a gun on Jefferson and tells him that he’ll teach the kids his own way.

That would have been the end of it. Except toxic-ass masculinity makes Will think that the right course of action is to go back to the school with more 100 gang members and kidnap Anissa and Jennifer at gunpoint. Unfortunately for them, Jefferson is acting a lot like Oliver Queen in season one, killing whoever stands between himself and his family.

I can say I was really surprised by how violent the show was. Not in a bad way, but since season one of Arrow, the CW shows have tried to largely stay away from having the heroes murder bad guys. However, during the fight, you see bullets, you see blood, and you see terrible burns. This show is not shying away from anything, and that actually gives more weight to the action. Jefferson rescues his girls, with Lynn’s blessing, and his dramatic return lets the entire world know that Black Lightning is back.

That includes Tobias Whale, the man who killed Jefferson’s father and is the true head of the dragon that is the 100 gang. He brings Lala into his office and shoots a harpoon through his chest, telling him to handle the newly resurrected Black Lightning, or else.

The episode ends with Anissa waking up and going to the bathroom, going through the day’s events in her head, and her own powers beginning to manifest as she breaks the sink. 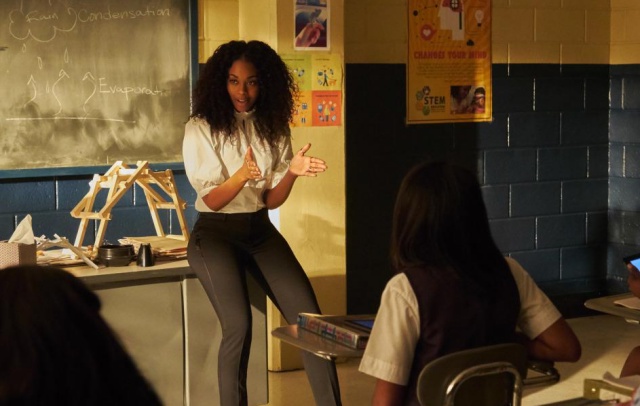 I really enjoyed this episode. One of the things I came in wondering was if this show was going to be a black superhero show or nah? I felt like Luke Cage has shown us that something can be very black-centric and still have an audience across all racial lines, but that was Netflix and this is the CW that has still no idea, after three seasons, what to do with nuBlack Jimmy Olsen. So, I was very pleasantly surprised to see the show really embrace the blackness of the source material, plus issues facing black people today. It was also able to show the different struggles that could be faced by black men and black women—the threat of physical violence against Jefferson and the threat of sexual violence against Jennifer.

Anissa is already one of my favorite characters, and I appreciate her conflict with her father over how best to serve the community. I love that her powers start to show in the first episode, and Lynn already knows about Jefferson’s powers, so I doubt we will have the tired “let’s keep secrets from women” storyline. I’m loving that we are introduced to so many amazing female characters, and it has already been announced that Anissa will be a queer woman with a WoC love interest, played by an actual WoC, which I am hella excited to see.

With one episode, Black Lightning has discussed gang violence, police brutality, sex trafficking, corruption, and generational divides in activism. Let’s see what the second episode has to bring.

I saw a superhero last night; he was black. He said, “This is for the hood.” Black Lightning is back.