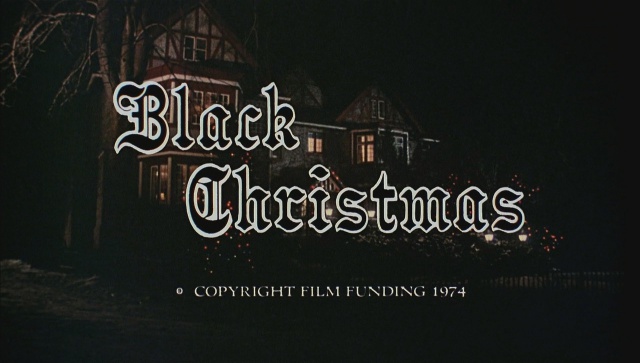 The classic movie Halloween is often credited with being the first slasher film. Well, sorry to break the news for some of you, but the reality is that while it is certainly the grandfather of slasher movies, there is a grandmother out there and her cane is here to smash y’all younglings in the face. Her name is Black Christmas.

Black Christmas was released 1974 and directed by Bob Clark. The story is about a group of sorority sisters being hunted by a killer who hides in the attic of their sorority house.

Our heroine is Jess (Olivia Hussey) and when the movie begins she receives a phone call from a man that she and the other women, called “the Moaner.” He makes a series of disgusting, sexual noises over the phone and even though they are disgusted by it, the movie tells us that this isn’t the first time he’s called. Barb (Margot Kidder aka Lois Lane) gets sick of it when he keeps upping the sexual harassment and she grabs the phone calls him a “fucking creep” to which the voice responds “I’m going to kill you” and hangs up the phone.

Barb is very much a modern woman—vulgar, loud, smart and not taking any shit from anyone. When another one of the girls, Claire, says that Barb shouldn’t have provoked him, Barb responds “I get two of those a day.” Claire is the virginal archetype which usually makes you the hero in these movies and Barb is the bad girl who is always destined to a victim. Yet Claire is our killer’s first victim, suffocated with plastic and left in a rocking chair to be undiscovered throughout the entire film’s run. I promise you that is not a spoiler, it’s the poster for the film.

Jess is interesting because she doesn’t play into any tropes. She’s a clearly smart, caring and loving person, but she is not a perfect virgin. She’s actually pregnant with her boyfriend Peter’s baby, and wants to have an abortion despite her boyfriend’s wishes. Peter pushes her to have the baby, but she says firmly “I can’t.” He shoots back calling her selfish and making her decision about him, because Peter is the worst. Yet it doesn’t change her mind and *spoiler alert* she survives the film! She doesn’t get punished for wanting to have an abortion and on top of that, THEY SAY THE WORD ABORTION!

That is super important because at the time this movie came out Roe v. Wade was only a year old. A woman being able to get an abortion legally was still a new thing and a horror movie not only allowed its protagonist to stand by having one, but made her emotional core of the film. Jess spends the film trying to help find Claire and just trying to survive as the killer closes in around her.

“The Moaner” (or Billy) is not just framed as a killer, he is specifically a male threat who has invaded a female space. He is one of a few men in the film, and after being called out for being a creepy bastard, he decides that attacking these women is a way of reclaiming the power that Barb took away by standing up to him. There is a reason why his eye is the only thing that you ever really get a good look at. His gazing at these women without their permission or knowledge is part of him turning them into objects for his pleasure.

Peter may not be a killer, but he is selfish, narcissistic, and tries to convince Jess to have a baby just because it is something he wants, even though we can tell from his behavior throughout the film he is not in a mental health place to have a child. The police officer who talks to Claire’s father when he is looking for her dismisses his fears and says that most of the time when a girl goes missing she’s just in a cabin with some boy.

In addition to all these wonderful gender twisty things, the movie is also just very good at being a horror flick. There are moments of horror that chill you to the core and it is shot beautifully. From the moment I first saw it in my college film club, it is a movie I have revisited almost every Halloween since.

In most horror movies, the women can sometimes seem like they are just there to either be either the ditz, the sexy one, and the savior, destined to be nothing more than a body count. While there is still a high body count in Black Christmas, it doesn’t feel overly exploitative, and none of the women are killed before or after sex. Overall you feel like you are watching a weak man try to reclaim control over women, and you spend the movie hoping he fails.

If you haven’t checked it out, give it a watch as it is without a doubt a classic, and one of the first films to deliver the classic line of “the call is coming from inside the house!”

There is a remake … don’t watch it. Ever.