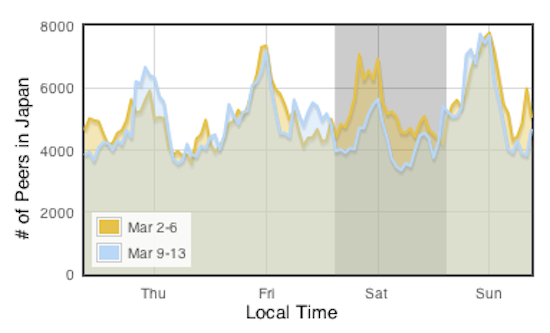 A testament to its current societal integration, popular peer-to-peer file sharing protocol BitTorrent usage stayed strong in Japan despite the recent earthquake, which was the highest recorded earthquake in Japanese history. AquaLab group, a team at Northwestern University near Chicago, using their own BitTorrent monitoring tools and recorded the amount of BitTorrent peers exchanging data during the week before the earthquake and during the week the earthquake hit, and found the numbers to be almost identical, with one exception. From AquaLab’s findings:

The exception can be seen in the 24-hour period immediately following the earthquake, which occurred at 2:46PM local time on Friday, March 11th. As the graph shows, the number of BitTorrent peers found online differed by as much as 25% in this period compared to the previous week at the same time. Surprisingly, we still see a large number of peers online and activity returns to normal on Saturday morning.

For some reason, it’s a little endearing that the most popular protocol used to pirate software basically laughed in the face of one of the strongest natural disasters in Japanese history, but on the flip side, may be a little worrying that people found it extremely important to continue their leeching and seeding during–and in the wake of–the highest recorded earthquake in Japan has ever experienced.