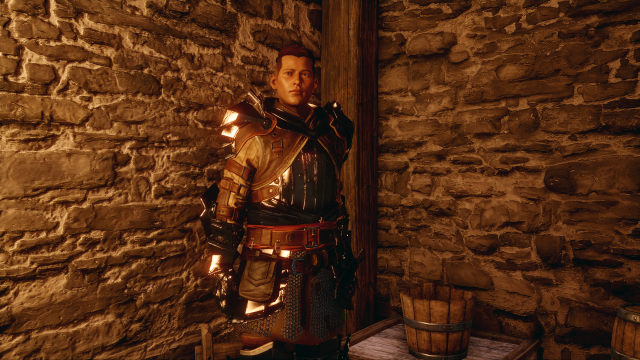 Dragon Age: Inquisition might just have one of the best representations of a trans character in video games ever. Writer Patrick Weekes took to the BioWare Blog to discuss exactly how this character came to be, and why they all loved creating him so much.

This article and the linked blog contain minor spoilers up to Iron Bull’s personal quest.

According to Weekes, a few years ago BioWare held a PAX panel on LGBTQ representation in gaming, where they were met with an overwhelming number of requests for trans and genderqueer representation that “did not make them either a monster or a joke.” The writers faced two challenges in doing so: making conversation about the subject come up naturally in-game, and having the character serve a purpose beyond “being there to be a genderqueer person.”

Making this character Iron Bull’s lieutenant, then, worked on multiple levels; Cremisius “Krem” Aclassi is there to “remind players that Bull has a history of command,” and to humanize Bull’s struggle between the Qun and his mercs. Krem has the added benefit of adding to the general discussion about how the Qunari think about gender roles.

Once it came time to actually create the character, Weekes says that people in every department “stepped up enthusiastically to make sure that Krem was created with respect,” including character artists, body animation, appropriate gendering in all languages, and voice work.

On the writing side, says Weekes,

I wrote Krem as best I could, and the editing team looked at every line and cleaned up dialogue and paraphrases that could give the wrong impression. I then passed him to two friends in the GQ community… at which point they showed me where I was absolutely messing things up and gave me constructive feedback on how to improve.

Weekes goes into detail about his mistakes and the changes made to improve them over on the blog, where he also talks about how proud the whole team is to have brought Krem to life. BioWare isn’t perfect in their representation (at one point in the game, Sera makes a particularly transphobic remark), but it’s wonderful that they’re attempting to do the right thing for diversity and be progressive in their characters.

Also, tonight at 7pm at NYU creative director Mike Laidlaw, lead writer David Gaider, and actor Freddie Prinze Jr. are on a panel to discuss “the BioWare creative process, share stories about making the game, and highlight their favorite details from the world of Dragon Age.” If you can’t make it to NY, you can watch the livestream here starting at 7:10pm.