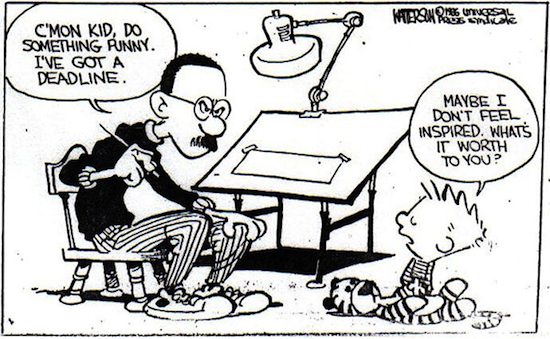 This. Is. Incredible. Bill Watterson, the creator of Calvin & Hobbes, has granted his first interview since 1989 to the Cleveland Plain-Dealer. Calvin & Hobbes stopped running in newspapers in 1995, so the opportunity to reminisce may have been what brought him out of his near-Salingerian reclusion.

It’s a moving, revealing (though alas, all too short) e-mail interview:

With almost 15 years of separation and reflection, what do you think it was about “Calvin and Hobbes” that went beyond just capturing readers’ attention, but their hearts as well?

The only part I understand is what went into the creation of the strip. What readers take away from it is up to them. Once the strip is published, readers bring their own experiences to it, and the work takes on a life of its own. Everyone responds differently to different parts.

I just tried to write honestly, and I tried to make this little world fun to look at, so people would take the time to read it. That was the full extent of my concern. You mix a bunch of ingredients, and once in a great while, chemistry happens. I can’t explain why the strip caught on the way it did, and I don’t think I could ever duplicate it. A lot of things have to go right all at once.

How do you want people to remember that 6-year-old and his tiger?

I vote for “Calvin and Hobbes, Eighth Wonder of the World.”

It’s not that short; there are a few more questions and answers on the Cleveland Plain-Dealer‘s website.

Bill Watterson, creator of beloved ‘Calvin and Hobbes’ comic strip looks back with no regrets (Plain-Dealer)