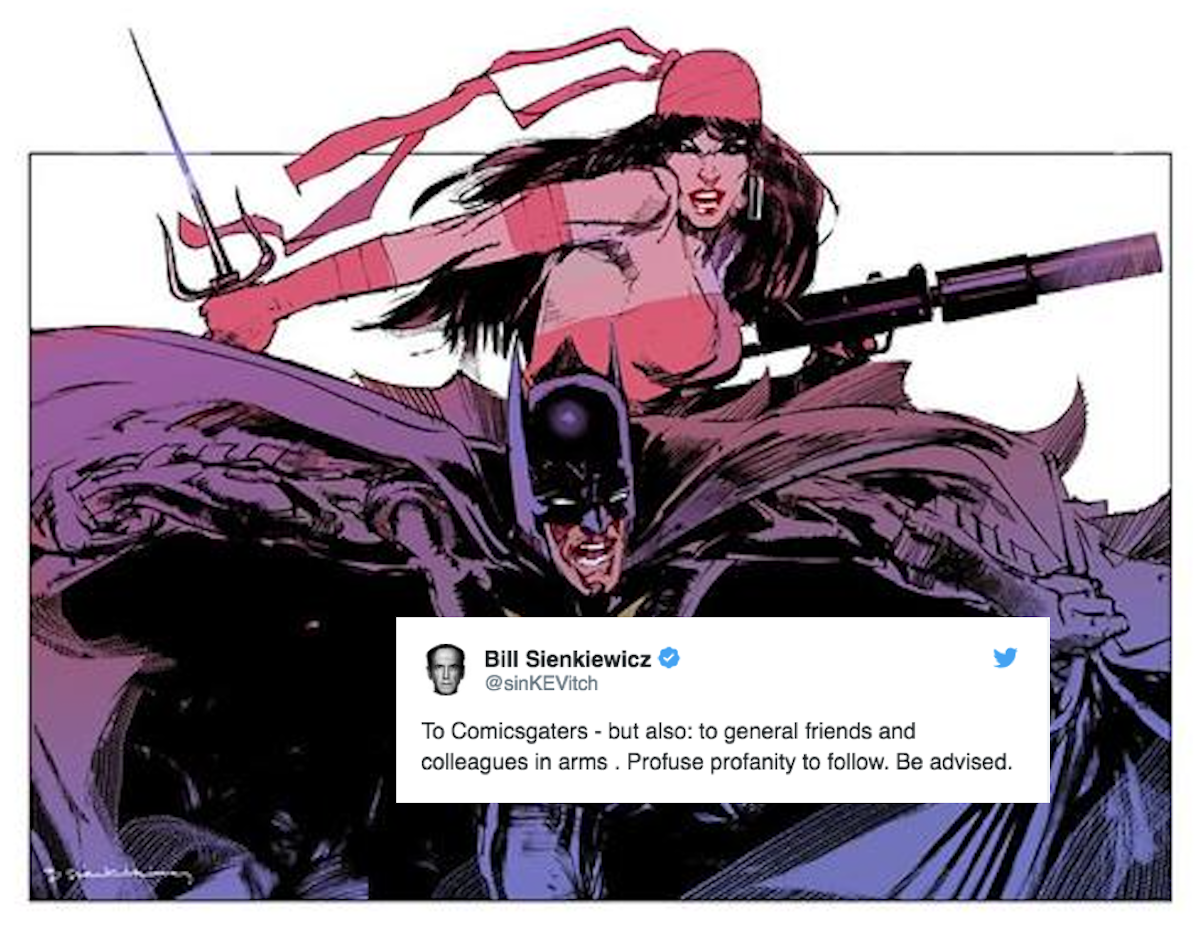 “Comicsgate,” if you’ve been fortunate enough to avoid it until now, is a comics-focused offshoot of Gamergate. Much of its inception can be traced back to the “milkshake selfie” and subsequent harassment of Marvel editor Heather Antos and other female staffers for daring to take a photograph together. But the root of the “movement” is a general decrying of “SJWs” and diversity in comics, and that’s been happening for a much longer period of time.

As Inverse explained in February, Comicsgaters are obsessed and angered by the participation of women and people of color in the comics industry, and the growing diversity of representation. You can read Inverse’s history of how Comicsgate began and spread like a disease here. The primary thing that you need to know to understand what’s going on:

Comicsgate … seems to just want less diversity, both in characters and creators, in an attempt to save comics and keep the medium white, male, and familiar. That’s it.

A new chapter in this ugly saga was opened this week after Comicsgaters made a video making their case for why the late DC comics artist Darwyn Cooke, who died in 2016, “would have been #ComicsGate.”

Cooke’s widow, Marsha Cooke, took offense to this suggestion, responding to a tweet about the video: “Hi guys, this is Darwyn’s wife and I can guarantee he thought you comics gate idiots were a bunch of crybaby losers ruining comics. because you are.”

Needless to say, this feedback was not well-received by said crybabies. Some Comicsgaters comicsgate’d, sending harassment to the widow of a man they professed to adore.

The incident with Cooke prompted prominent names in comics to speak out against the Comicsgate ethos and the harassment it engenders. Taking a particularly scorched-earth stance was Eisner-winning artist Bill Sienkiewicz. Sienkiewicz has been in the industry since he was 19 years old and is revered for his innovative style and his work on titles like Sandman: Endless Nights, New Mutants, Daredevil, Elektra: Assassin, Batman, and many, many, many, many more.

“To Comicsgaters – but also: to general friends and colleagues in arms. Profuse profanity to follow. Be advised,” Sienkiewicz wrote in a Facebook post that was cross-posted to Twitter. Which should advise you if profuse profanity (for a good cause) offends you.

To Comicsgaters – but also: to general friends and colleagues in arms . Profuse profanity to follow. Be advised.

To begin.
I’m convinced Comics chose ME as a practitioner, emissary, evangelist, what-have-you—rather than the other way around.
Perhaps that’s why I tend to view most other creators through a similar lens. Whatever the actual reason people create comics, tell stories, live in this world, it’s still a wonderful calling.

Creators are family; every voice is unique and necessary.

That said, Comics sure as hell didn’t choose the so-called Comicsgate contingent to promote hateful, misogynistic and plain-old-ugly dogma. No, these ‘Gaters- you guys- you brought that ugliness all by yourselves.

To be honest, I just don’t get your deal. Are you so insecure, so afraid, so fearful of the prospect of bearing the ‘incel’ moniker, or by sharing creative space with someone with more estrogen than you- that you’re all somehow threatened to your very manhood or your livelihood? How super-heroic of you.

I’d ask you to explain it to me, but frankly what I’ve heard from your quarter already bores me; as well as just plain pisses me off. I fucking despise bullies. Cowards.

What you’re each promoting individually is not some divine creative dispensation; it’s just you being an asshole. Collectively, you’re a gaggle, a clan,(-potentially with a k unsubtle as that shot may be)- a veritable bag’s worth of douches. Whatever the name you give for your assembly, you’re not the Avengers. You’re still just a bunch of assholes.

Comics isn’t a boys club. It’s not “NO (insert ethnic group, gender, religion, sexual preference here) ALLOWED.” It’s a club , a meeting place a forum for creators. Of all stripes. Like a real life Legion of Super Heroes, or a Justice League. Only with pen and ink paper and Cintiqs and laptops and…

Stop being the creepy racist misogynist uncles showing up at reunions and pissing in the punchbowl to disprove your beta standing. Stop being the weird cousins the entire world points to as the definition of every “comic book nerd” stereotype. Or do it far away from us. Stop being whiny misunderstood victims bitching bout favoritism, intolerance, and sexism. You’re slinging inky-black aspersions, obliviously crying racism in your Wite-Out™. You’re damned right some corrections need to be made; starting with the guys in the mirror first.

So stop being awful ambassadors for the worst of our natures. Stop being brownshirts. Stop being goddamned ugly dicks. And to re-jigger an ugly phrase you sling at women, I’m instead going to channel it here in the spirit of my Aussie friends: Stop being such insufferable clueless cunts.

The medium didn’t call on you to be the best version of assholes you could be. Neither did we.
Knock it off.
Either step up. Or step off.
We, Comics, and The Audience- will be absolutley fine without you.
And you won’t be missed one damned bit.

It’s vital that people with power in the industry like Sienkiewicz take a strong stance on issues of harassment that are disproportionately shouldered by the targets of that harassment, namely women, people of color, queer people, disabled people, and other marginalized groups. Sienkiewicz’s Twitter and Facebook reply fields are full-up with thousands of people thankful for what he said.

It should not be left to the groups who are being attacked to fight battles they did not ask for alone and unaided. Beyond Sienkiewicz’s calling-out of the bullying behavior that he despises, it’s equally crucial to hear him say that “Creators are family; every voice is unique and necessary,” and that “Comics isn’t a boys club.” These are the sort of messages that need to be repeated over and over again until they drown out the hateful hordes.

To Comicsgaters – but also: to general friends and colleagues in arms . Profuse profanity to follow. Be advised.

To begin.
I’m convinced Comics chose ME as a practitioner, emissary, evangelist,… https://t.co/Ts7qqF7f6m

Ada Byron is a freelance writer and comics fan. She is the daughter of Lord Byron and the first computer programmer.