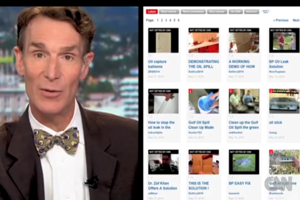 Bill Nye the Science Guy, by now a bona fide cable news pundit, helped CNN evaluate different oil spill solutions submitted by YouTube users. Some, like one user suggesting further drilling, confused him, and the various items people suggested tossing over the oil– sand, hay, a ShamWow-like towel– he seemed to find were on the right track, but some might work better than others.

For a generation who learned everything they know about geology from Mr. Science Guy, watching Nye evaluate the quality of user-generated science projects is quite a treat, especially for the users who suggested using hay to mop up the spill, which got the highest praise from Nye.

Nye also ended his evaluations with a plea to the American people to respect the workers in the energy industry, and to gain an understanding for how complicated providing a country with energy is: