Why Did It Movie Turn Beverly Marsh Into Damsel in Distress? | The Mary Sue

Why Did the It Movie Turn Beverly Marsh Into a Damsel in Distress? 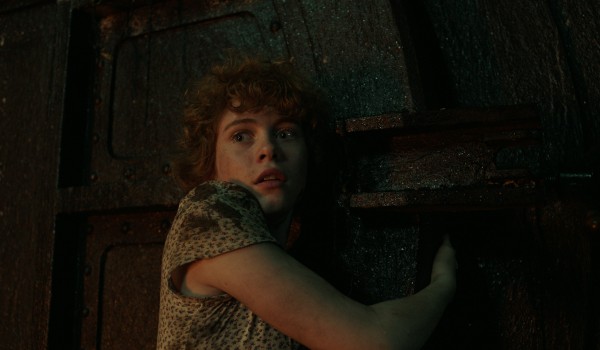 (Warning: Spoilers for the new adaptation of It follow.)

Let me preface this article by explaining that I love horror, and that Stephen King is my favorite author. My mother read It when she was pregnant with me, and I’ve been a fan ever since. So needless to say, the release of the new It adaptation was a long awaited day for me.

I left the theater exasperated and have only grown more flummoxed by the adaptation of Beverly Marsh. As a screenwriter myself, I cannot understand why the writers and executives behind It found it necessary to turn the book’s feminist heroine into a damsel in distress. In doing so, they destroyed King’s central theme of unity and love overcoming all odds, present throughout his original masterpiece.

For those who aren’t die-hard King fans, while he doesn’t have a strong male-to-female character ratio in his collection, his stories that feature women do so in an extremely nuanced way, creating women who are just as rich and interesting as any of his popular male leads. Stephen King, after all, has given us Annie Wilkes, Trisha McFarland, Dolores Claiborne, and Carrie White. In the case of It, he gave us Beverly Marsh—the lone girl among the “Losers Club” of kids that must fight the entity known as “It.”

What is extremely disconcerting about the recent adaptation is that Beverly is stripped of her power and equality when she’s taken by Pennywise the clown (one of It’s forms) in order to propel the six boys into the sewers to rescue her. The tired and sexist trope of using female weakness to show male strength goes directly against everything Beverly stood for in the book. When Bill Denbrough tries to force her to sit out of the group’s smoke out vision quest because she’s a girl, she calls him out and demands an equal seat at the table.

She’s earned it by fighting side by side with them every step of the way. From that moment on, she has the boys’ full respect and an equal stance in the fight. In fact, during target practice held to determine which member of the Club will face-off with It, Beverly out-shoots the boys by 1000% and is given the responsibility of landing the kill shot. In the beginning parts of the film, Beverly is portrayed as strong and fearless and is the one who damages It at the house on Neibolt Street. Yet, in spite of many opportunities for It to capture each one of the arguably weaker boys, the filmmakers chose to turn Beverly into a victim.

The group of seven recognizes the special power of their friendship. “The whole is greater than the sum of its parts” when standing up to evil. In the book, they head into the sewers together because if they don’t try to stop It, no one else will. In the film, there is no indication that the group has any intention of confronting the monster until Beverly is taken. After they fight over the prospective dangers of being too proactive, they part ways and go about their lives. It isn’t until one of their own is taken that they take action. In the book, they stand up to It in order to protect those more defenseless than themselves, a timeless lesson in leadership and ethics. This conscious decision to change the plot by victimizing the one girl in the group fundamentally, unnecessarily, an even detrimentally alters the core theme of the story.

Hollywood, it was not necessary to turn Beverly into a sleeping beauty under a monster’s spell, broken only by true love’s kiss. I cannot think of a good reason to turn her into a damsel in distress. If the creative team wanted a different and more pressing way to get the kids into the sewers, they should have done it in a way that didn’t turn Beverly into a sexist trope. As she showed time and time again in King’s book, she is fully capable of taking care of herself.

Women are fully capable of taking care of themselves. Don’t underestimate your audience. We would’ve believed the kids’ plan to stop Pennywise together as a team. Millions of people who loved the book did. Stop using sexist tropes. These new storytellers might have taken away Beverly’s voice, but I am here to reclaim it.

Unfortunately, this is not a one-off occurrence. Those who have read the book should notice a change in the story of Mike Hanlon—one of the fictional town’s only black residents—morphing from a nuanced core character to an afterthought. His position as an intelligent researcher is passed to Ben Hanscom, and plans for the character in the sequel, as told by Director Andy Muschietti, might boost his importance to the plot, but they could easily run into racist trope problems. Andy Muschietti and the writers of It, please try harder. We need strong female characters. Mr. King handed you one, and you destroyed her.

Jackie Perez is an MIT Engineer turned Naval Officer turned Screenwriter living in Los Angeles. She earned her MFA in TV and Screenwriting from Stephens College, and currently does Navy STEM Outreach and is Director of Membership and Grants for Veterans in Media and Entertainment. She loves horror and is adapting and directing Stephen King’s Dollar Baby short story, Beachworld. Her dream project would be adapting King’s The Girl Who Loved Tom Gordon. Twitter: @jackierageperez