We Love Betty White Too, But This Fear of 2016 Thing Is Getting Out of Hand 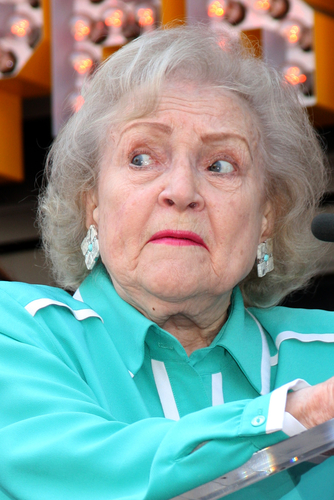 We know. 2016 has been a garbage sandwich on shit bread. Too many cool people dying, etc, etc. And while I totally understand the inclination to keep an eye on certain celebrities who “might be next,” one Betty White fan has taken it maybe a skosh too far.

According to Money Magazine, a GoFundMe user named Demetrios Hrysikos has started a fund to “protect Betty White from 2016.” He writes:

Help 2016 catch these hands if it goes anywhere near Betty White! If she’s okay with it I will fly to where ever Betty White is and keep her safe till Jan 1 , 2017. Now , assuming she doesn’t want a strange Greek standing guard outside her door all monies will be donated to the Spartanburg little theater to help craft new stars of stage and screen to carry mantle of the legends that have left is this year.

Thankfully, I don’t think this was actually serious. In an update, Hrysikos writes that he:

“[H]ad no idea this would go so far but I’m happy it did. The idea came to me after news of Carrie fishers passing to try and put a smile Back on some people faces and do some good! Other than liking to support our local arts and having a friend who works at the little theater I don’t have any connection to it, I just thought it would be a good place for any money made to go. 2016 has taken so many great artists and SLT helps support and nurture new budding talent in our town. I’d like to think that Betty , Carrie, and Bowie would be happy with any proceeds going to that cause , which I assure you it WILL!”

While some folks in the comments worry that the whole thing is a scam, based on posts from friends of Hryskikos, it really does seem like this is a guy who wanted to help a friend’s theater company (the Spartanburg Little Theater in South Carolina), thought this would be a funny way to do it that would only reach his personal network, and ended up being seen by, um, way more people.

Which is totally fine. After all, it would be way too much for someone to actually think it necessary to bodily protect someone from 2016. Also, Betty White has been around a long time. It’s gonna take a lot more than piddly ol’ 2016 to pry her from this life, that’s for damn sure!