Betty White Lands Recurring Role on Hot in Cleveland, Thanks To the Internet 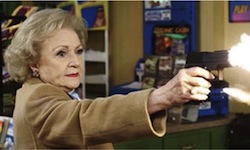 In case you were on the fence after the 2008 election about the Internet’s ability to effect real world change, the trajectory of former Golden Girl Betty White should be enough to sway you. Becoming something of a web celebrity (which included a successful Facebook campaign to have the 88-year-old host Saturday Night Live) has done wonders for White’s career, including turning what was supposed to be a cameo on a new sitcom, Hot in Cleveland, into a serial character’s role.

Hot In Cleveland, an original series slated for TV Land in June, put White in their pilot as the caretaker of home occupied by the protagonists. But after a Superbowl commercial, a spot on 30 Rock, and a general zeitgeist of White-omania, the series creators have decided to bring back Betty to our airwaves as a reoccurring character. Which is a smart move on the writers’ part: How else would they get the teen demographic to tune into TV Land for a show about Cleveland?