Review: Betty and Veronica #1 is a Step Forward | The Mary Sue

Betty and Veronica #1: Finally, We Can Fight About Something Besides Archie 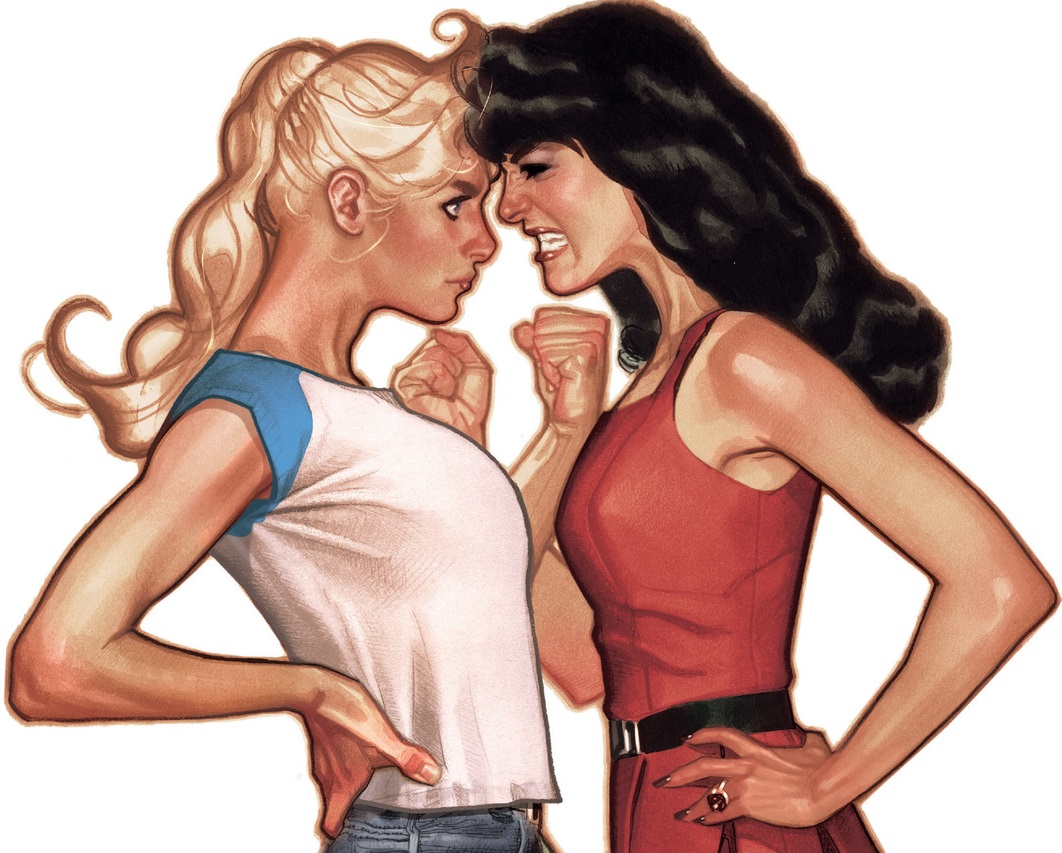 Are you more of a Betty or a Veronica? I’m probably a Veronica, albeit a somewhat less spoiled version (I hope). It’s not that I’m not nice, exactly…but I’m definitely not a blonde. And everybody knows that blondes are the wholesome, nice girls, right? Except when they’re having more fun or being bimbos? I don’t know, it’s hard to keep track of all the boring, one-dimensional archetypes of women that limit the kinds of stories we tell about them. 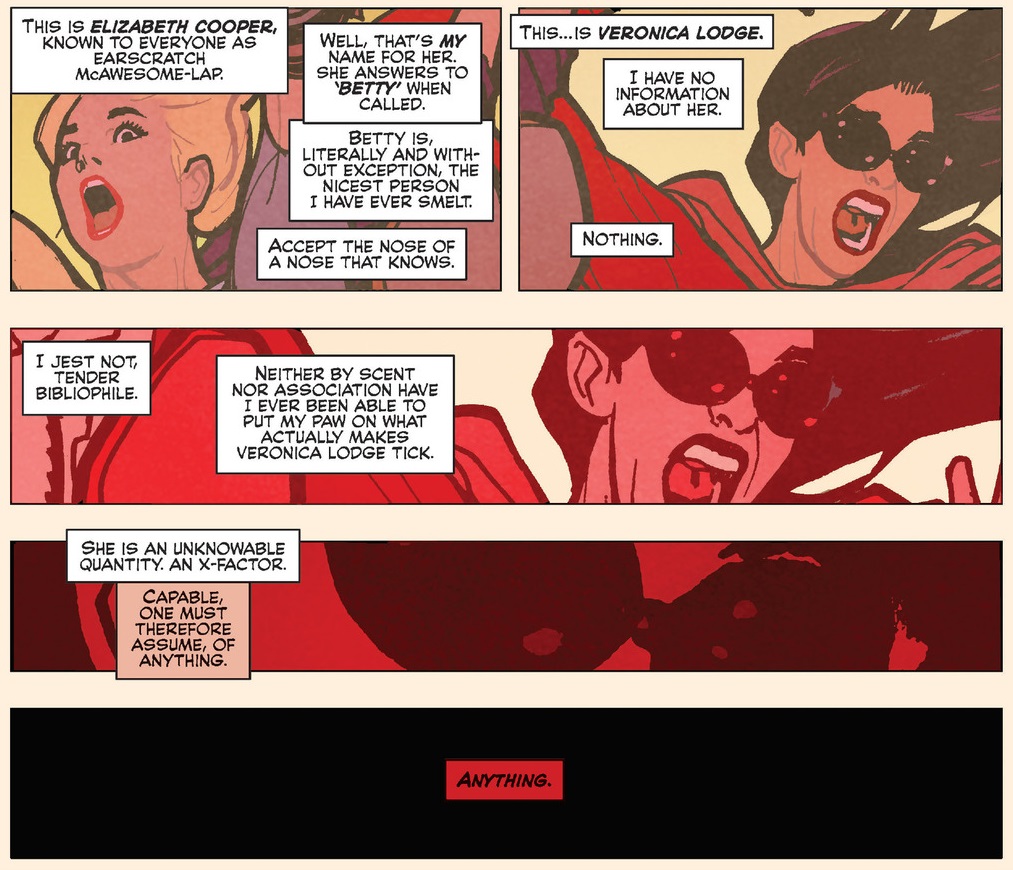 In case you couldn’t tell which is the nice one by their hair color. Also sunglasses, which means that Veronica is a terrible person, probably.

So I have to give Betty and Veronica writer/artist Adam Hughes a lot of credit for his first issue; while he’s using the old Betty-or-Veronica dichotomy of femininity, they aren’t fighting over a boy! I’m just so particularly tired of stories that pit girls against one another over a boy. I never could quite figure out what was so great about Archie, anyway, that he was always getting between Betty and Veronica. Ladies, stop fighting over this milquetoast and be the amazing gal pals (or even “gal pals”) we know you can be! I promise, you don’t need boys.

Betty has had enough of these boys.

There’s a lot to like in this new Betty and Veronica, if you’re looking for an updated version of the familiar Riverdale gang. Hughes’s zingy, irreverent dialogue is an unquestionably fun read, and his lovely artwork imparts a distinctly vintage feel. Think new-fashioned Norman Rockwell. Gorgeous, soft colors by José Villarrubia likewise hit a perfect harmony of modern nostalgia.

It appears that Hughes has a coming-of- age story in mind, one that is well-suited for the eponymous girls, who bookend the central conflict for an ensemble cast. This issue gestures toward a broader theme of high school kids staring down adulthood, challenging them to confront change and declare loyalties. Hughes is setting up a story with the potential to become something far more interesting than the classic Betty and Veronica squabble over Archie, which is refreshing to see even if the girls are still filling their old roles as “the nice one” and “the rich something-that-rhymes-with-Sabrina.”

As the arc unfolds, I’d like to see Hughes draw Betty and Veronica out more in the writing with the same thoughtful balance he puts into the artwork, giving them stronger and more nuanced voices to speak for themselves. It’s cheeky and humorous to narrate the story by way of Jughead’s pooch, Hot Dog, but the one opportunity Betty and Veronica have to narrate for themselves simultaneously objectifies them in a somewhat jarring way. 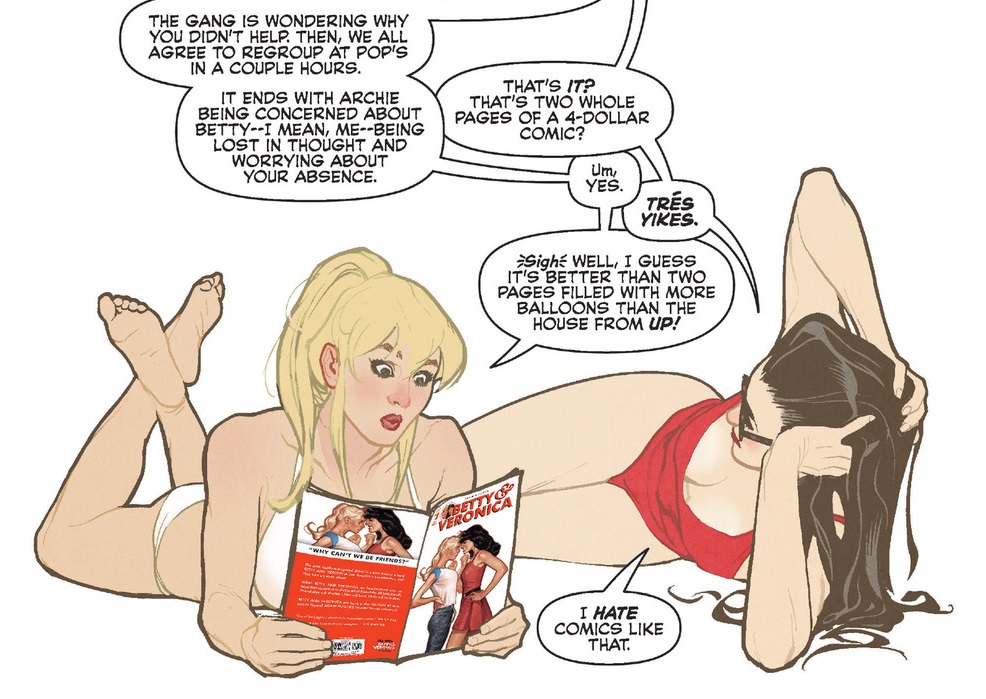 The reader is informed by Hot Dog that in lieu of showing-not-telling, the girls will present some exposition while wearing swimsuits (despite it clearly being sweater-weather in the actual story). And indeed, the next page is entirely blank save for Betty and Veronica lolling in their swimsuits, recounting what would have happened were those pages not eaten by the dog. It literally removes their characters’ action from the story and replaces it with a pin-up. It’s clever in its meta-critique, which I have no doubt was its intent, but this early in Hughes’ run I’d rather see his take on Betty and Veronica play out in-story. Still, I’m so glad the girls aren’t fighting over Archie any more, and it gives me hope that Hughes will give them a chance to evolve from caricatures into characters.