The Best Geek Podcasts the Internet Has to Offer 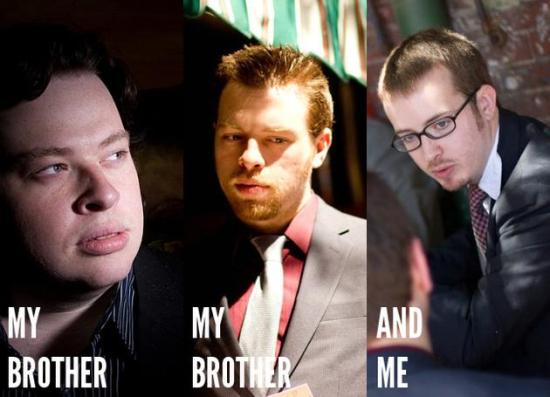 There are many senses that a wayward geek can stimulate in order to further their enjoyment of the culture that surrounds them. Obviously, visual stimulation is one of the many that anyone reading this is employing. Kinetic stimulation can be satisfied with movement, as anyone trying to sell you motion controls is liable to pitch. However, one particular sense is rarely utilized in a manner befitting the subject. But thanks to an influx in quality podcasts over the fast couple years, we geeks no longer have to worry about leaving those auditory urges unsatisfied. Better yet, these podcasts span the gap between the various disciplines of geekdom in such a manner that allows them to sometimes “cross the streams,” as it were, without disastrous consequences.

So, here they are, some of the best geek podcasts that the ‘net has to offer.

The McElroy brothers, Justin, Travis and Griffin, are collectively known for this podcast. Beyond that, though, the name McElroy is known in gaming circles for currently being some of the best parts of Joystiq. And Joystiq is known for its humor.

So, here is a podcast full of folks known for their hilarity, an advice show for the “modren” era. The Brothers McElroy not only answer questions sent into the show, but they just find the silliest questions posed to the Internet and attempt to answer them, often with goofy results. This ranges from questions about grooming to chinchilla breeding and beyond. Your eyes aren’t deceiving you, you just read that. As they always make sure to note, no one should take their advice, and as their sign-off suggests, make sure you kiss your dad square on the lips after listening.

Though these lists are often in no particular order, the Gamers With Jobs Conference Call is by far my favorite podcast listed here. There are moments in other podcasts where they briefly surpass my love for GWJCC, but they are few and far between. Here’s why: The Conference Call is produced at o(r nearly at) commercial level, features interesting hosts with a wide range of life experiences talking about topics as they relate to gaming.

And by gaming, that doesn’t just mean video games. They go on at length about board games, pinball, virtual cabinets of all kinds and loads of pen-and-paper RPGs to boot. Shawn Andrich hosts with co-founder Sean Sands, though the group is often rotating through the rest. There are a number of regulars that really make this one something special.

Any list about podcasts that didn’t include Ira Glass and This American Life would be doing a terrible disservice. It happens to be one of the absolute best podcasts in general. If not the best, it’s certainly one of the most popular, as it’s billed as one of the most downloaded podcasts from week to week.

The show often operates under a series of first-person narratives about whatever topic is currently set before them. Sometimesthis is timelier than others, such as natural disaster-related podcasts and the like. It can move from touching to hilarious without so much as a beat, depending on the topic. There’s also just something terribly soothing about Ira Glass’ voice.

Weekend Confirmed is possibly the oddest podcast on this list when you consider where it’s coming from and what it’s about. First off, Garnett Lee, the host, is no stranger to the various corners of gaming journalism and serves as Editorial Director for GameFly Media. Yes, that GameFly. This mostly means that he controls content as presented by Shacknews, which had previously been purchased by GameFly.

So, then we come to the podcast, which has to relate all of Garnett and company’s love and vitriol for gaming while also somehow convincing more people to play games and thus rent from GameFly. That isn’t the expressed concern, of course, but the little advertisements for GameFly within the podcast itself are telling. That’s also not to say that they haven’t remained objective either. They just come from strange, strange roots.

Ultimately, Garnett Lee knows his stuff and brings a ton of experience to the crew. Weekend Confirmed is — and should be — a staple in any geek podcast diet.

Kevin Smith may have seemingly gone mostly underground since his very public displeasure at the critics of Cop Out, but he really just doubled-down and focused on other things. One of those other things is his SModcast, the product of his own and producer Scott Mosier’s comic ramblings.

But as the original SModcast gained in popularity, it slowly fanned out to various other supporting podcasts hosted by Smith’s friends and cohorts. When it comes down to it, the original is the funniest and best. There’s something about the candor between Smith and Mosier that just comes off as relaxed, funny and somehow informative.

Originally a series of emails among friends about comics, iFanboy evolved into a website which then became a lovely podcast. Thus is the storied history, anyway, but it all began with three dudes who really, really loved comics; Josh Flanagan, Conor Kilpatrick and Ron Richards.

iFanboy, as you might be able to guess, is all about comics. Similar to SModcast, however, it has almost become more of a hub for various podcasts rather than just a singular one. If you’re not too familiar with comics, there’s the Pick of the Week where they talk about a single issue that has impressed them. Then again, feel free to listen to it if you are familiar with comics too. Heck, there’s even a video podcast for those feeling up to both a visual and auditory assault.