How Bernie Sanders Helped Turn the Democratic Party Against Women 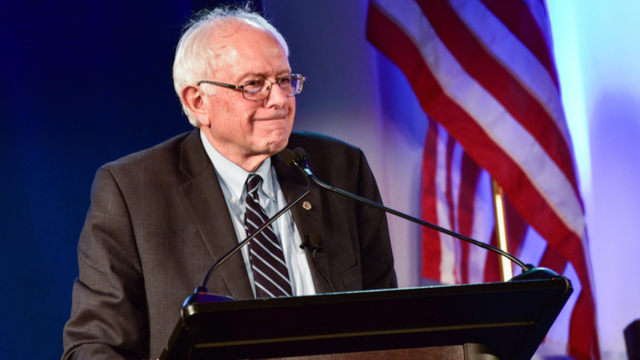 On Saturday, the organizers of the Women’s March issued a statement apologizing for the “hurt and confusion” caused by their announcement that Vermont Sen. Bernie Sanders would headline the upcoming Women’s Convention, taking place October 27–29 in Detroit, MI.

‘‘We are sorry we caused hurt and confusion for so many of you this week,’’ the Women’s March said in a series of tweets. They added, ‘‘We acknowledge the announcement about Senator Sanders gave the impression he is occupying a central role at the convention. (He is not.)’’

You see, Sanders is very much male in a society where far too many brilliant women are overlooked for platforms and opportunities to represent themselves—to tell their own stories as women instead of having their stories told by men—which was just one reason why the decision by the Women’s March organizers didn’t sit too well with feminists. Other critics also argued that Sanders’ harsh character attacks on Hillary Clinton, which painted the painfully stereotypical image of a dishonest, deceitful woman during the primaries, laid the groundwork for Clinton’s defeat in the general election.

But the harm that Sanders has done to the Democratic party is farther reaching than some petty internal conflict in the 2016 primaries. In particular, his time in the limelight has drastically impacted the Democratic party’s outlook on women, people of color, and all Americans of marginalized identities, and the importance of fighting for their rights. Don’t get me wrong when I say I’m grateful for Sanders’ contributions to the Democratic party’s 2016 platform, re: universal health care, marijuana legalization, a $15 minimum wage, and Palestine. But someone who’s spent the past year unapologetically leading a crusade against the concept of “identity politics” has no place at a convention to unite intersectional feminists in a contentious, dangerous political climate such as this.

While Sanders’ anti-identity politics crusade picked up in the wake of the Democratic party’s devastating general election defeat, from the start, his ultimate message was that nothing was a bigger, more urgent threat to Americans than the country’s broken economy and corrupt political establishment. According to this message, socialism was the cure-all: All the other, innumerable identity-based problems, ranging from racial and anti-LGBTQ discrimination to increasingly inaccessible abortion, would immediately cease to exist. In many ways, whether or not it was his intention, Sanders’ rhetoric convinced his supporters that “identity politics” are nothing but a distraction from “real issues.” And, as Sanders himself might say, “let me be very clear”: in those supporters’ eyes, women’s issues are not real issues.

That 12 percent of Sanders’ supporters went on to vote for Trump in the general election also shows the extend of the damage done by his message of all-consuming, unquestioning hatred for the “establishment”—without even clearly explaining just what the establishment really is. In their eyes, largely because of Sanders’ preaching, the debate was establishment vs. anti-establishment to the death—not of progress vs. bigotry, of feminism vs. patriarchy.

To Sanders’ feisty faction of “Bernie Bros,” the sociopolitical oppression shouldered by women, the LGBTQ community, and people of color to this day is purportedly a thing of the past, and those who continue to harp on continued discrimination are simply being whiny, annoying “social justice warriors.”

The reality, of course, is that over the past five years alone, marginalized Americans continue to face all sorts of challenges, old and new. In many states, gay and trans people can be fired or evicted solely for their orientation or gender identity. Racially charged police violence continues to claim black lives at staggering rates. And across the country, especially in rural areas, hundreds of restrictions on abortion enacted just within the past few years have decimated access to safe, legal abortion, shutting down clinics by the dozen and outright banning different, safe forms of the procedure.

Surely, regulations on Wall Street and a higher minimum wage would help all of the aforementioned groups, given the often intersectional nature of social and economic issues. But the point is that there’s great harm in talking about “identity politics” like they’re unimportant issues, when often, as with abortion rights and the institutionalized racism behind mass incarceration, they can be life and death matters.

And speaking of abortion rights, over the past year, Sanders ranked among prominent Democrats including House Minority Leader Nancy Pelosi, California Gov. Jerry Brown, and DNC chair Tom Perez, who opened their arms to “pro-life” Democrats, stating the DNC should get behind them and offer them funding. The idea behind this was typical Sanders-speak: Economic issues unite, while petty, irrelevant “social” issues do nothing but divide.

“I think you just can’t exclude people who disagree with us on one issue,” Sanders said of his decision to support the Nebraska mayoral candidate in April. Pelosi, Perez, and Brown would come out with similar statements shortly after.

At a time in which the United States has the highest maternal mortality rate in the industrialized world, when the federal and the vast majority of state governments would like to see Planned Parenthood defunded, it’s shocking that anyone could be so dismissive of abortion rights, so willing to cheaply negotiate away women’s human rights. It’s unlikely that a Democratic candidate could win Republican voters just by flip-flopping on one, singular issue; the real way to win voters is to win over those who historically have records of sitting out elections, many of whom are progressives. Clearly, this isn’t about winning back seats as Sanders says it is, as much as it is about sending the message that the party has “matured” post-2016 election, and now sees what’s really important (read: not women’s rights issues.)

For a while, the idea that abortion is a human right and GOP lawmakers’ fetishization of fetuses has no place in forcing women to give birth seemed widely accepted among the left. It wasn’t until the whole “identity politics have divided America, etc.” argument became the glamorous, prototypical Democratic argument that it is, today, that abortion rights suddenly became something to shrug at and compromise on. And it wasn’t until Sanders that the Democratic party altered its direction exclusively to shy from identity-based issues.

It’s important to note that this tension in the party is fundamentally one of privilege. If Sanders and his legions of Bernie Bros would rather rant about Democratic socialism to women than listen to their voices, perhaps that’s because many of them have never experienced the same identity-based oppression, but nevertheless feel confident in their authority to claim that identity politics are meaningless.

In his latest book, We Were Eight Years in Power, Ta-Nehisi Coates tackles the phenomenon of politicians on both sides of the aisle disregarding on what they deem “identity politics,” and offered one starkly disappointing episode involving Sanders and a woman running to be the second Latina senator in U.S. history.

“It is not good enough for someone to say, ‘I’m a woman! Vote for me!’ No, that’s not good enough,” Sanders said. “One of the struggles that you’re going to be seeing in the Democratic Party is whether we go beyond identity politics.”

His suggestion that female candidates are trying to gain advantage in proudly declaring their gender in a male-dominated political sphere—or that candidates of color are attempting to gain advantage in declaring their race in a predominantly white political sphere—with nothing else of substance to offer, is equal parts offensive and ridiculous. If we all really believed that being part of a marginalized identity made winning elections any easier, then we’d really need someone to explain the demographics of our Congress to us. It’s absurd that Sanders believes that this is new information he’s imparting on people who have been made well aware by life that being part of a marginalized group isn’t an advantage.

As for that last part about going “beyond identity politics,”—boy, do I have questions. Namely, what is beyond identity politics? I can’t think of anything other than the right’s beloved colorblind society, and if that’s what Sanders has convinced his fellow Democrats is the best path forward, then they’d better be prepared for intersectional feminists to fight back. And in the meantime, here’s to hoping Sanders is confronted about this at the Women’s Convention.