Bentonville Film Festival: These Up-and-Coming Filmmakers Are Ones to Watch 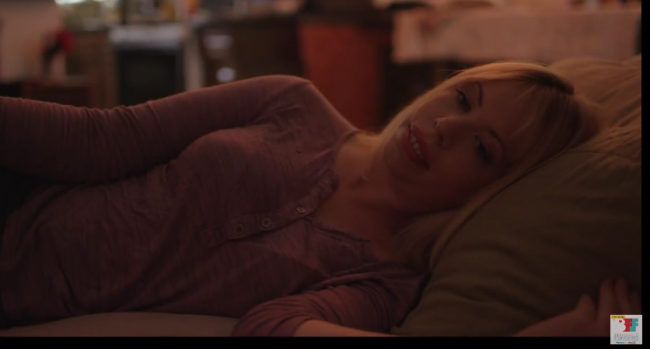 What I love about the Bentonville Film Festival is that it celebrates diversity both on-screen and behind the camera. I have never seen so many unique storytellers in one place and it gives me hope to think that these creators represent the future of the industry. I had a chance to talk with quite a few of them about the movies they made and I’m proud to share snippets of those conversations with you now. So without further adieu…

This psychological thriller centers on a female marine corps vet and her “difficult re-entry into civilian and domestic life” after serving in war.

“This story is one that has not been told very much. The story of homecoming from war is one of our oldest, but from a women’s perspective that’s not a story we tell a whole lot in movies,” Remy Auberjonois said of the film which marks his directorial debut. It was co-written by Kate Nowlin who also stars. I can’t embed the video but you can watch the trailer here.

Interesting fact: A blood stripe is a decorative stripe that runs down the leg of the dress uniform of officers in the marine corps.

A short narrative film about a standup comedian who decides to spend the weekend with her estranged daughter.

When asked why she wanted to make this film,  Gloria Mercer (writer/director/producer/editor) told me, “I care a lot about the types of roles that are written for women. I wanted to give a voice to a character who basically wasn’t perfect but still very interesting…and celebrate her imperfections. Especially from the perspective of not being a perfect mom because I feel like women are often defined by motherhood in roles.”

Find more about the film here and catch Gloria’s other works here.

Fun fact: This film was her final project for undergrad and she calls it “the biggest thing that I’ve done.”

This is a story about a guy with a speech impediment and beautiful singing voice who communicates through singing rather than talking. “He’s a bit hopeless so he ends up living in a unit in a storage facility,” Aussie writer/director Susie Earl explained. But don’t worry, it’s a romcom so you can expect a happy ending. His love interest is a woman with “big, buck teeth” and it’s essentially about them falling for one another.

Earl previously worked in animation and got funding for this film thanks to the Australian government arts council. When asked about the significance of government supporting the arts, she said, “I think it’s really important. It means you get to make stuff and pay people properly.”

This film is as cool as its namesake. It centers on a young Filipino-American girl who is bullied by her older brother. She teaches herself how to DJ on his turntables and learns to express herself through music. It’s based on the real-life hip-hop scene in San Francisco during the ’80s, which saw teen girls mixing it up with the guys and shaping an entire genre. The film was written, directed and edited by Marie Jamora and features seven original songs which seemed more cost effective than licensing songs from that era.

“It’s about a girl who..learns how to be her own badass, ” producer and co-production designer Jason Mcklaigan added.

Based on the true story of German author Helga Schneider, this film is about four generations of women and a secret that started during WWII. The film starts at the moment that secret is revealed and explores how everything unravels.

“This story is about a woman abandoning her family and that’s just so unusual, ” producer Lizzie Pickering explained. “Although it’s set in the year 2000, it’s about the generational messages passed down from that experience. It’s about four strong female leads.”

Fun fact: The two started their own production company called In Trust Films and fundraised the project themselves. They even got Philip Selway, drummer for Radiohead, to score the film.

This documentary from co-directors Sabine Krayenbühl and Zeva Oelbaum centers on a woman named Gertrude Bell who traveled through the Middle East at the turn of last century. “[She] is often referred to as the female Lawrence of Arabia,” Krayenbühl told me. “[She] became familiar with the tribes, spoke the languages, drew maps of the region, was recruited by British military intelligence and worked in the war office. [She] was transferred to Baghdad and became one of the key architects in the modern state of Iraq.”

Krayenbühl and Oelbaum previously worked together on a film about Ruth Gruber called Ahead of Time as producer and editor respectively but this marks their directorial debut. They performed archival research from all over the world, looked at primary sources and secured permissions from descendants of those involved. This film was a five-year project and most definitely a labor of love.

When asked what we should take away from the film, Krayenbühl said: “She was a champion of tolerance. She really respected and valued all the people she came in touch with and fought for their right for self-rule. This is right now a very important topic…to respect other ethnic groups, other religions.”

Oelbaum added: We feel like the film is a great springboard for discussion on a lot of different topics. started a Kickstarter to fund the digitization of archival elements.

Looking at the Stars

This inspirational documentary follows two ballerinas from Fernanda Bianchini Ballet Association in Brazil, the world’s only ballet school for the blind. Director Alexandre Peralta, who hails from a small town nearby, followed them for three years. He says he made this film because he was curious about the lives of the dancers behind those beautiful performances. “I want people to watch it and feel closer because of similarities, not the differences. It not about what’s different about them but what we have in common. I want you to be yourself in them and have empathy.”

This half-hour pilot centers on a group of thirty-somethings navigating life and love. The first episode is about ending a relationship (referred to as an “an un-wedding”) and where to go from there.

Actor Melonie Diaz added, “I feel like there’s something interesting happening with the 30-year-old demographic. We feel like we’re supposed to be settling down and getting married and having children but times have changed and we want other things…So [the show is] kind of just talking about those issues and relationships.”