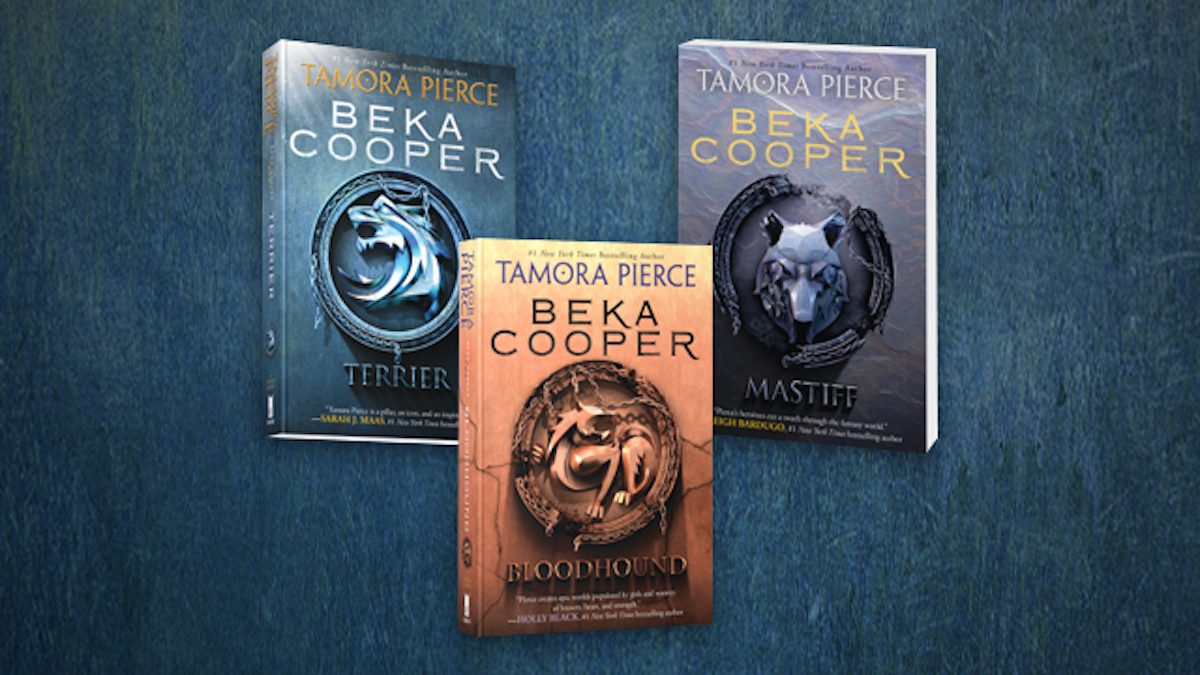 Win not one but three whole books by the legendary Tamora Pierce. Pierce’s Beka Cooper series is a thrilling visit to the world of Tortall that we first fell in love with via Alanna’s adventures in The Song of the Lioness.

We know we’re always in masterful hands with Pierce, the grand dame of YA fantasy. Her Beka Cooper books are a prequel set 200 years before Alanna’s era. They’ve got some snazzy new covers, and you can enter to win the complete set!

Want to know more about what’s in store for the crime-fighting Beka in Tortall?

When she was eight years old, Beka Cooper did the Lord Provost of Tortall a very big favor. In return, he took her, her dying mother, and her two younger sisters and two younger brothers into his house, to raise and educate them well above the poverty-stricken slum where he found them. Beka’s brothers and sisters have honorable trades, but Beka?

Beka wants to be a Provost’s Guard, or as they’re known in her time, a Provost’s Dog, the most despised, rough-and-tumble law enforcers in the realm. She starts right back where she came from, in the Lower City, because Beka has this funny idea that poor people deserve equal protection under the law.

Guiding her steps are Goodwin and Tunstall, two of the toughest Dogs in the capital, who will teach Beka the ropes—if she survives. Walking with her on her rocky are as motley a crew of friends and helpers as ever the Lower City has seen: the Lord Provost himself; Rosto the Piper, sheer lightning with knives, and his associates, the swordswoman Aniki and the hedgewitch Kora; the lady knight Sabine; the ghosts of the dead who ride on pigeon-back; the city’s dust whirlwinds, who collect conversations; a devoted young scent hound, and the strange, purple-eyed black cat Pounce, whose hobby is grooming heroes.

Beka is pitch-forked into the realm’s deadliest crimes, from the mass murder of poor workers to conspiracies against the crown. She’ll need all of her wits, all of her friends, and a strong arm with a baton in her quest to enforce the law.

Enter for the chance to win all three books in the Beka Cooper series: Terrier (Book One), Bloodhound (Book Two), and Mastiff (Book Three).