The folks behind BeautifulPeople.com -- a dating site for the attractive and vapid -- have done another thing, and no, it's not "shut up and go away forever" like we were all hoping. 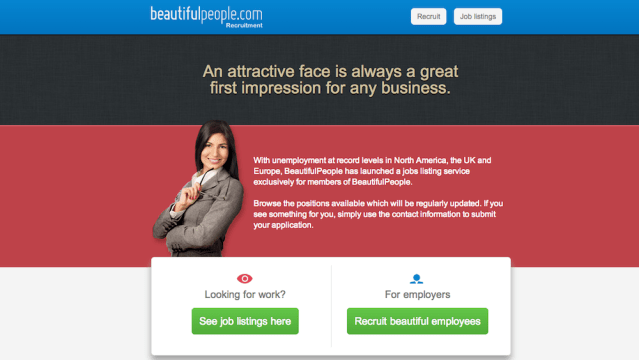 Did you know that even attractive people occasionally have to work for a living? It’s true! They’re just like us normals that way! This sad but true fact has been grudgingly acknowledged by the gorgeous, vacantly staring minds* behind BeautifulPeople.com. Now, they’ve started an employment site that is — you guessed it — only for beautiful people. Because shallowness and discrimination are their business, and business is good.

BeuatifulPeople.com began as a profoundly arrogant and elitist dating site only available to people deemed beautiful by a group of their beautiful peers and proof that the Internet is a great way for horrible people to meet one another and be horrible together. The site helps put beautiful people together on dates, which, if its hallcinatory homepage image is to be believed, generally feature the presence of lions and snakes and fainting couches. Which sounds like a pretty bad date to me, but what do I know — I’m “handsome” at best, and that’s on my good days.

Now, the site’s founders dipping their no doubt exquisitely pedicured toes into the employment game. Employers can now advertise jobs on the site, and members can apply to those positions directly through their profile, because attractive people  — who studies show are already more likely to be hired for open positions — need another advantage, clearly. The site is painting the idea as a win for the beautiful patrons and employers alike. Greg Hodge, a walking, talking, one-man war on human decency who is also managing director of the site, explained to The Telegraph that this is because beautiful people are simply better than the rest of us, and should be treated accordingly.

An honest employer will tell you that it pays to hire good looking staff…Attractive people tend to make a better first impression on clients, win more business and earn more.

Of course, there are some problems with the idea. The site acknowledges that employers incorporated in places with laws against hiring discrimination based on attractiveness probably shouldn’t use the service, lest they get sued to the far side of the Moon over clearly discriminatory hiring practices.

Oh, and the terms of service make quite clear that if you take a “modeling” job through the service that ends up being a sleazy photo shoot or worse, they are in no way responsible. But wait, why would would anyone advertise for sleazy modeling gigs on a website catering to people who have basically admitted to the world that their sole job skill or redeeming quality as a human is a pretty face that’s getting less so every day…oh, gotcha, nevermind.

*I’m kidding, of course. The folks who put this together are probably reasonably smart. They’re also demons put on Earth to warp destroy all that is good and decent, of course. But, y’know, pretty smart ones.