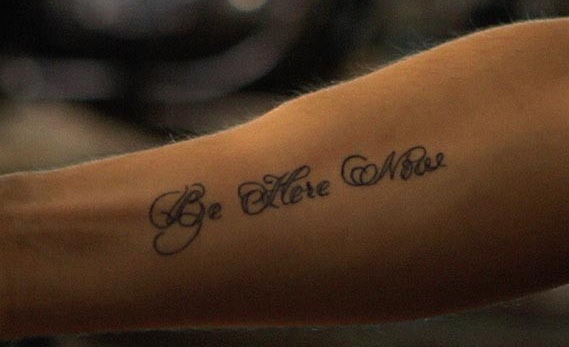 When actor Andy Whitfield died at the age of 39 of Non-Hodgkin’s Lymphoma, the news was received with shock. He had only been diagnosed 18 months earlier and just a year earlier starred as the strongest of gladiators, Spartacus. It was the first major acting role for the structural engineer-turned-model-turned-actor, and he left behind two young children and his wife of 10 years, Vashti. But while fighting the disease, he and Vashti decided to use his celebrity to tell his story for others facing such struggles. Although Andy lost his fight, his battle with cancer was captured by Academy Award-nominated documentarian Lilibet Foster in her new film Be Here Now.

Hoping to continue Andy and Vashti’s hope of using the film to help others facing such struggles, Foster collaborated with The Leukemia and Lymphoma Society, Stand Up to Cancer, and the Cancer Support Community to release the film and use its release for fundraising.

Lesley Coffin (TMS): How did you meet Andy and Vashti? Were you approached about making the documentary or did you know them before hand?

Lilibet Foster: I didn’t know them, but I knew of Andy because of how famous he got on Spartacus. It’s odd, because Andy became a global star, so I’m contacted by people all over the world, people who speak all different languages, about Andy. But while filming the first season he had been having back pain, assuming it was muscle pain from the gladiator work out and doing stunts. But he kept going to physical therapy and one therapist finally told him to get a scan, which is when they found the cancer, Non-Hodgkin’s Lymphoma. And when he first got diagnosed, he and Vashti went straight to chemotherapy and thought it had been wiped out. But when he went to get cleared to work, they found he still had cancer. And at that point, he and Vashti went to a restaurant and saw a tattoo parlor across the street and got Be Here Now tattooed on their arms.

And that was when they decided to use Andy’s star power to tell this story, because if they were so frightened and isolated and scared, others must feel that way too and maybe this could help them. And they knew it wasn’t just about people with cancer but people with any challenge or any dream, because Andy didn’t become an actor until his late 30s. So they hoped their story could be inspiring. And at that point they called Andy’s manager Sam Maydew, who is my producing partner on the movie, and when they told him what they wanted to do, Sam said “that’s a really bad idea. You want a camera following around?” And they said they were sure, so Sam got on board, and that’s when Sam brought me on. And at the time, I had been working on a TV series about Dennis Hopper, at the time that he got cancer as well. Sam asked me just to speak with them, and I said sure and talked to them on the phone. And when we were making small talk, I asked where in England he’s from, and he was from a tiny little town off of Northern Wales, and that town was the same town my father had grown up in. And the next day I called to say I was in.

TMS: Did they consider making the documentary on their own, or did they always want to have a documentarian director involved?

Foster: They always wanted a third party involved, but as you can see in the film, they wanted some personal footage as well. Andy wanted to have a video camera at home to use as sort of a confessional that he could use anytime. And I bought the camera he used in the film and set him up with a microphone, so it would be easy for them to use it. And Vashti ended up using that camera too. And they found that camera to be a cathartic element, for both of them. And I ended up using that confessional style during my own interviews with them, and thinking about when they should be interviewed together, when they needed to talk separately. But you can tell so much about them simply by the way they lived their daily lives. They have a way of believing in manifesting their own destinies, the way they talked about getting Andy the role on Spartacus, and the way they embraced that idea of Be Here Now. And I thought, I want to try to capture that with an observational, vérité approach. And then there was their incredible love story, which kept jumping out at me. They are really funny, they play off one another, they fight and argue, and they have great tenderness. So I went back to watch the movie Love Story for inspiration.

TMS: Because this also involves Andy and Vashti’s kids and parents at the house, did you set some rules with the family about interviews or when you’d be there filming.

Foster: I did interview his parents, although not a lot. As a cinema vérité style director, I’m not a strict vérité director, but what you have to do is establish trust with them, rather than set specific rules. And it has to be a mutual trust between us, because we couldn’t plan much, we just had to see where things went. But that trust meant having a constant dialogue during his treatments. And there were times when they’d be like, “not today, Andy’s not up for it.” But we’d talk about doing part of the scheduled time and why they were making it, and I’d end up coming over and filming maybe only half a day. And then later they’d thank me because, as Vashti said, talking about it on camera was like ripping off a Band-Aid. It allowed them to gather their thoughts while filming, especially when I’d interview them separately. But also, they had so much going on, that when I just filmed them in the house, I think they barely noticed the camera. The children’s involvement’s probably the only aspect where Andy and Vashti drew a line, but that came very naturally to me and it was obvious what would and wouldn’t be appropriate. So I don’t think we had any conflict about how we were involving the kids.

TMS: There are two sections of the film when Andy left the family to travel by himself, and the first time you traveled with Andy to India. How did you decide who to follow when Vashti and Andy were apart?

Foster: 99% of the time, the camera followed Andy, so I went to India with him. And Andy used to ask, and was concerned, about the movie being cinematic. And I said, well, I make theatrical documentaries. And I don’t mean television documentaries are less important or artistic, but there is a difference in the viewing experience, because when you watch a film in the dark theater, your attention is focused for the entire time just on the screen. Watching TV, you can get up and stop it and there are breaks programmed in the viewing. So I had to make it from the perspective that this would be a theatrical viewing experience. And the movie has a lot of subplots, about Andy’s views about nature and heeling, and their love story, so I had to embrace the opportunity to do something subtle, while still making it look and feel cinematic, while still being real and raw. So going with him to India was important for Andy’s story, to give it that cinematic scope.

TMS: Do you feel Andy’s profession as an actor and being someone used to being on camera, rather than someone else who happened to be going through the same fight again cancer, affected the way the film was made or turned out?

Foster: At the beginning of the film, we have clips of Andy as Spartacus and his first movie, and his many commercials. But quickly, he leaves behind the acting world and the world we see him in really is this other life he lived when he got sick. He was going on another journey, to find a cure for his cancer, and that was the journey I wanted to follow. So the acting and celebrity part of it barely came into the story. But like I said, they were rarely aware of the camera, so I don’t know if Andy’s any different on screen or off. But they come across as these very open and honest people simply because that’s who they really were and are. Andy, known for playing Spartacus, saying I’m frightened, has power. And that’s just Andy. They were incredible people for me to be around.

TMS: Did you change anything about the way you filmed and interviewed them when they were told the outcome would be different from what they planned for when they started the film?

Foster: A lot of audiences who have seen the film are inspired by it and feel its empowering, so I hope they feel it’s a journey of life, even knowing about Andy. Personally, I firmly believed while filming it that Andy would make it. And I couldn’t have done the movie if I had any doubts. It would have been wrong for me to be there if I felt any differently because there is science about the power of positive thinking, and there wouldn’t have been room for my doubts in their life. Was I willing to cross the line to help them keep fighting? Sure, I’m a filmmaker and it would have been strange, but it’s just a movie and Andy’s life was more important than a movie. I would have abandon a movie any day of the week if I felt it was the right thing to do. When you are making an observational film, you forget about your own life and only focus on their life. So I became friends with Vashti and Andy and would have done anything to help them through this.

TMS: When did Vashti see a version of the film?

Foster: There is always a point in the editing process when a movie is polished enough that it’s time to show the movie to the person it is about. You can wait until the end, and we waited until it was pretty close to final cut. But I also have a strong belief that you should never show someone a movie about them in a vacuum. They should be surrounded by friends and family, in order to have some objectivity. So when we flew Vashti to New York and brought her to a theater at UTA, and she invited friends and people she works with and Jai Courtney, who was Andy’s best friend and Godfather to the children. They were all there and watched the film with Vashti, to offer support, and that was an amazing experience. And Vashti actually told me to put something in that I’d left out, thinking it might be too hard for her to have in there. And she said it needs to be there. She’s an amazing individual. I’ve learned a lot just being around her.