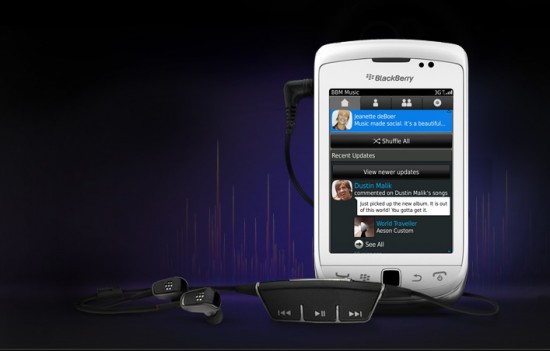 In a world were there are already many different music service options, there is now one more: BlackBerry Messenger Music. In hopes of working its way into the market (presumably), BBM Music seems to be tackling the subject from a somewhat different angle, however. BBM Music, currently in closed beta, goes for a $5 per month subscription. For that price you get to build a music profile of 50 songs, 25 of which you can swap out for new ones each month. Sound a little limiting? Well, that’s because they are trying their best not to directly compete with streaming giants like Spotify.

The focus of BBM Music, it seems, will be a social one. In addition to your personal collection of songs, you can then share your collection with friends and your friends can share with you. If you find a song you like, you can then add it to your library. On top of that, you can make playlists that include your songs and the songs of your friends, and then share those. Share, share, share.

The goal seems to be to promote social music discovery. You’ve doubtless found yourself musicless and soliciting recommendations from friends, and BBM Music would allow you to do so pretty effortlessly. As a bonus, you’ll know that your friends can look into your library and find stuff as well. That way, you won’t have to be constantly shoving your new favorite digs down their throats like you do now.

As you might have assumed, the music you get from BBM Music will be treated as a music loan, meaning that if you stop subscribing, you can say goodbye to your tunes. Even with that being the case, it’s still pretty easy for you to go get permanent — if digital — copies of the music because BBM Music kindly provides handy “buy it here” links that will direct you to the digital music stores RIM would like you to patronize.

As mentioned before, the service is currently in closed beta, but it’ll be interesting to see how it takes off when it opens up. It seems like BBM Music has given enough thought to differentiating itself from the army of other streaming services available, but it’s hard to tell if that’ll be enough to overshadow the allure of raw quantity, which other services have in spades. There’s also the question of whether or not you own a BlackBerry, which is a huge barrier to entry and severely retricts the potential user base. Still, it’s nice to see someone prioritizing the social aspect of music listening and discovery, which often plays second fiddle to pure, gluttonous, impossible-to-sift-through-this-all music gluttony.