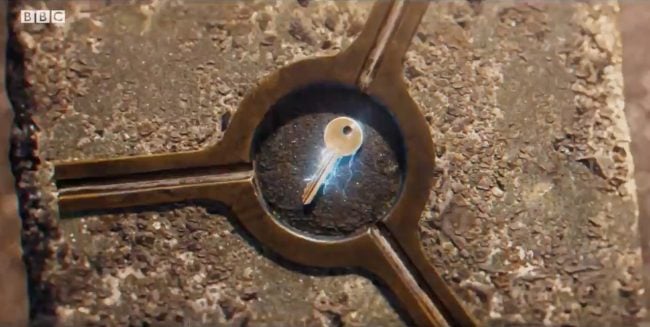 Earlier, someone at the BBC decided to spike Doctor Who fans’ blood pressure with a bit of a hype-building teaser. The official Doctor Who Twitter account simply tweeted “Exclusive News: It’s Almost Time. #DoctorWho” with a fun teaser video which confirmed the fact that we would very soon know the identity of the 13th Doctor.

The video is pretty neat, as it starts with a lovely shot of the Tardis key sitting atop an altar or shrine of sorts. As it crackles with lightning, the video cuts away to a bunch of different locations, each one prominently featuring the number 13. Locations include: somebody’s car (what); 10 Downing Street (where the 10 turns into a 13, nice); and what might be the West Bay, Dorset cliffs (also known as the Broadchurch cliff, which is likely a nod to new showrunner Chris Chibnall, who ran Broadchurch for its three seasons).

While I realize how meta this sentence is about to sound, I have to say that it’s a pretty fun way of announcing the announcement. Many fans—including yours truly—were left with their hearts in their throats at the end of this last season when (spoilers) Bill “died” (read: essentially ascended into another plane of existence) and the Doctor was left alone, also seemingly dead after destroying a whole load of Cybermen. He makes it back to the Tardis, though, with Bill and Heather’s help. He staves off regeneration by outright screaming at himself and denying it, saying he’s tired of changing into other people and having to re-learn the lessons he’s taken so long to absorb. He lands on a snowy planet and is confronted with his own first incarnation, the William Hartnell Doctor (played by David Bradley).

Fans theorize that the Doctor has actually already regenerated, but thanks to a visual storytelling device established with Cyberman Bill in the final episode, he just hasn’t accepted that fact himself. The device was pretty clever, actually. We saw Bill as she saw herself: still human, still Bill. But everyone else saw her as the Cyberman she had been placed into. It was only when she looked into a mirror that she saw the Cyberman.

Personally speaking, I’m backing this theory. I think the Doctor really has changed, but because he’s so steeped in not wanting to change, he’s still seeing his old face. This lines up nicely with Bill’s own struggle to accept the fact that she had been converted into a Cyberman, and thus makes for a nice parallel.

My own far-left-field-there’s-no-way-this-could-actually-happen theory is that the Doctor regenerated into Bill over guilt that he couldn’t save her. Bill makes him promise that he won’t get her killed before they set off onto their final adventure, and what better way to keep that promise than to take on her appearance and keep her own legacy going?

Anyway. We’ll know for sure who the 13th Doctor will be this Sunday, after the Wimbledon’s Men’s Final match. I’m so excited.