Universal Is Doing a Battlestar Galactica Movie. Frak. Me. 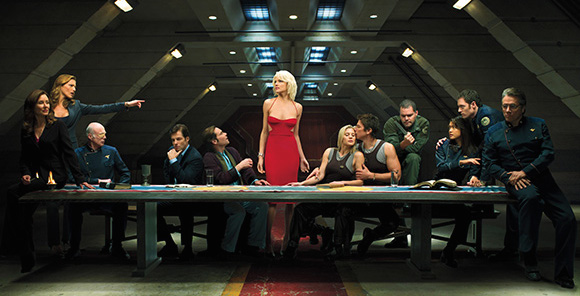 It was only a matter of time: Universal has tapped writer Jack Paglen, scribe of the upcoming Johnny-Depp-as-an-evil-computer movie Transcendence, to write a Battlestar Galactica movie. (Incidentally, he’s also signed on for Fox’s Prometheus sequel.) Original Battlestar Galactica series creator Glen Larson will be involved as a producer. Variety is reporting that the movie will be a “complete reimagining” of the story.

And that’s all we know. So if you’re not feeling particularly inclined to freak out at this exact moment, you can stop reading now.

How do you even condense the epic, sprawling story of Battlestar Galactica into 120 minutes?! Presumably it being a “complete reimagining” means it’ll only tell part of the story, not the whole thing, so that’s promising, but… will it even be the same characters, or will it just take place in the same universe? Will it focus on the Cylon attack on the Colonies, or will it avoid the mankind-vs-outside-evil conflict that so many other movies have done in favor of focusing on the aftermath, the exodus of humanity, the freshness of which as a premise is one of the things that made Battlestar great? Does Universal have a film series in mind? Will Battlestar Galactica: The Movie just be two hours of Tigh scowling at things?

We don’t know the answer to any of those questions, save the last one, which is a probable negative. (Sigh. Readers of my BSG newbie recaps, you know I love me some Tigh.) Since we know so little, I’m not excited or screaming in anger: I’m just scared that they’ll screw it up. How about you? Is there a way Universal can make this movie worthy of its source material, or should they airlock it entirely?

In the meantime, I’m bringing this back: