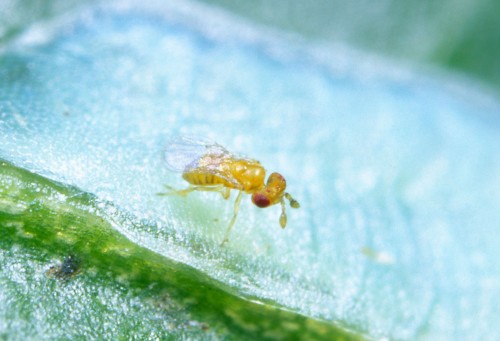 Agricultural management officials in California have decided to let loose hundreds of wasps, to find and kill hundreds of non-native moths. The decision to unleash the wasps is an attempt to find alternatives to aerial spraying of pesticides, while still protecting crops from being damaged by the pesky moths. You might be asking yourself, well okay less pesticides is probably a good thing, but why wasps?

The small, stinger-less wasps being used are pale yellow wasps (Trichogramma platneri) which are only the size of rice kernels. These insects lay their eggs inside the light brown apple moth’s eggs. The wasps incubate inside the eggs until the larvae emerge ready to kill the developing moth babies. The California Department of Food and Agriculture plan to use the wasps in San Luis Obispo and Sacramento counties, in what is being called an “integrated pest management” approach to agriculture that minimizes detrimental effects. But is introducing one predator to take on another predator neither of which are native to the area, really going to cause no problems?

Its impossible to predict what might happen by introducing different organisms into new environments. Sometimes the consequences are disastrous, but sometimes the effects are less damaging. In the case of the wasps, California Agriculture Secretary Karen Ross says the insects are “harmless” to people and pets, while being deadly for the light brown apple moths. But the wasps don’t just take down the moths, they also pull the same egg infesting, baby eating trick on other insects, including those of beneficial species like butterflies. The wasps may also attract predators of their own, so while the wasp population is short-lived, any predators that are drawn to the area where the wasps are released may decide to stick around.

To counter these concerns about the wasps, California agriculture officials are not releasing the wasps in areas that have endangered butterfly populations. According to officials the wasps have such a short lifespan, and such limited mobility that releasing them in just six sections of the state over less than 50 acres will really limit their ability to cause any long term environmental problems.

The reason the California Department of Food and Agriculture is taking such steps to introduce nontoxic approaches to pest management is due to complaints from environmental groups. The agency first attempted to eradicate apple moths in Monterrey and Santa Cruz in 2007 by quarantining crops and spraying a pheromone mixture. But they undertook this effort without conducting an environmental impact analysis. Hundreds of people started to get sick, and environmental groups were successful in fighting the method in court. Since then, the agency has switched tracks from trying to eradicate the species to just controlling its population.

But there are some people who feel the moth was never a threat to agriculture in the first place, and shouldn’t be the subject of a campaign to either kill or control it, certainly not by introducing a wasp army. A 2010 state environmental impact report says that there have been no published studies that show light brown apple moths cause crop damage. But Steve Lyle, a spokesman for the Department of Food and Agriculture, said controlling the moth population is important because it has the potential to cause a lot of damage. The agency’s preventive measures stem from the experience of farmers in Australia and New Zealand, where the moth originates, who did experience crop damage due to light brown apple moth infestations.

Right now the moth’s population in California is small, but the agency is being proactive to avoid any damage or detrimental effects from the moths. The moth has been listed by the US Department of Agriculture (USDA) as a pest since the 1950s, which means that the state is required to eradicate the bug from crops to assure international trading partners that California produce isn’t hosting moth eggs. Environmental groups have submitted two petitions to the USDA to take the moth off its list of pests, but so far no changes have been made.

While opinions may be in stark contrast on both sides of the moth debate, California is moving ahead with releasing the wasps. Crews will place small cards with wasp pupae on outdoor plants in the moth infested neighborhoods, and then leave the rest up to nature. Here’s to hoping that the wasps do exactly what the government expects them to do, because that’s always what happens when we fiddle with the environment. Right?