So Batman Is Now a Mafia Don 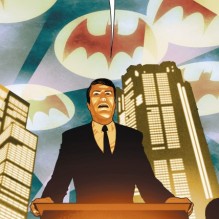 “Some of you may have wondered…How does a man like Batman afford to constantly update his crime-fighting technology? Where does his money come from?

That’s right. In front of a shocked crowd, Bruce Wayne returned to the city he called home after a mysterious absence (one chronicled in the pages of Grant Morrison’s multi-part epic Batman: The Return of Bruce Wayne) to not only reveal he’d been funding Batman for years, but also that he planned to expand said funding to create the multinational organization known as Batman Incorporated.

— Alex Segura, in The Source, the official blog of DC Comics.  It’s funny, because the last time we checked, funding an international organization of highly skilled individuals who go around and beat up people that they don’t like was ILLEGAL and admitting it would GET YOU IN TROUBLE WITH THE FEDS, Interpol, and several other organizations whose attention is, in a word, non-trivial.

Also if I wanted to read Iron Man I WOULD READ IRON MAN.