How BioShock’s Plot Was Predicted by Batman: The Animated Series in 1994 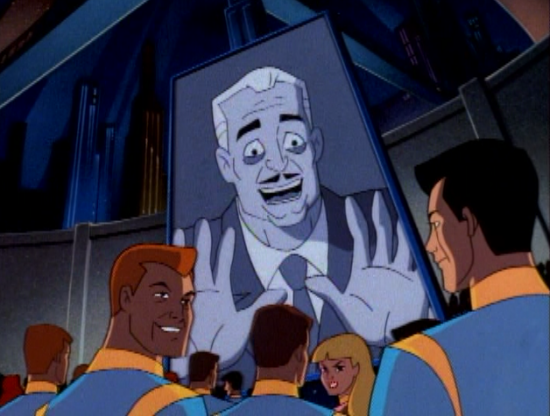 Oh, what’s that… what’s that thing where they’re in a underwater city?  And it’s all dystopian, with enormous mechanical guards?  Like, there’s this billionaire capitalist who’s starting a new civilization based on his rules, and he doesn’t want anyone interfering with it?  But then the heroes come in and stop him with help from Mr. Freeze?

Compare to the synopsis for the original BioShock, courtesy of Wikipedia:

BioShock is set during 1960, in Rapture, a fictional underwater dystopian city. The history of Rapture is learned by the player through audio recordings as he explores the city. Rapture was envisioned by the Randian business magnate Andrew Ryan, who wanted to create a laissez-faire state to escape increasingly oppressive political, economic, and religious authority on land.

By New Year’s Eve of 1959, “[Ryan’s] paranoia had reached such a level he was hanging dozens of people, mostly innocent, in Rapture’s main square.”

I’d never put the two together before, but in the aftermath of Bioshock 2, I suddenly remembered that there was an episode of B:TAS where Batman and Robin fight automatons in a dystopian ocean city.  No, really!  The episode also features shark-shaped torpedoes and the series-first references to Krypto the Superdog, Streaky the Supercat, the Bat-mite, and Mr. Myxzptlk. 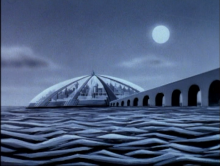 See, there’s this billionaire theme-park magnate named Grant Walker who’s built and populated an entire city in the middle of the ocean so that he can… well, I’ll let him tell you himself, from his Big Villain Speech.

Welcome friends!  Thanks to all our hard work, Oceana’s nearly up and running.  Now, while most folk believe Oceana’s just another theme park, we know better.  Fact of the matter is, its not too nice out there anymore.  Crime, hatred, violence.  Things keep going on like that, it could mean the end of civilization.  That’s why I decided to build a city where good folks can live in peace.

A new… Garden of Eden, you might say, from which  a new race of people can spring.  Now, of course you can’t have Spring without a little Winter, about five years of it, I’d say.  Now, don’t anybody worry.  We’ll all be warm as toast in here.  As for those folks outside, well, it’s sad, but… I’m only speeding up what they were doing to themselves. 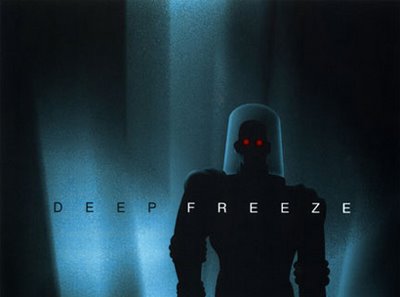 This, by the way, is a speech he’s giving to the assembled happy masses of Oceana, describing how he’s going to encase the rest of the world in ice, using technology (a big gun) developed from studying Mr. Freeze.  That’s how Batman and Robin wind up getting involved in this one: Walker uses an enormous robot to kidnap Mr. Freeze from jail. 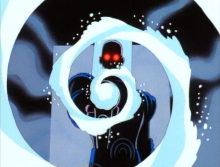 The people behind B:TAS were the first to give Victor Fries the origin that we now associate with him: his freezing technology and personal intolerance for heat came about from a lab accident that happened while he developed a cryogenic freezing process for his terminally ill wife.  He is a tragic figure, his wife perpetually frozen and himself unable to touch another human being.  Most of his criminal actions in the series were motivated either by desire for revenge against those who had caused his accident, or a need for money to keep his wife alive and continue his research.  Deep Freeze introduces the next twist of his fate: Walker explains to Fries that his frozen state has stopped the aging process.  Fries is immortal.

(Later in the series we find out that although he does not age, his body still decays, and he winds up as just a head with REALLY CREEPY ROBOT SPIDER LEGS, but that is (Batman) beyond the scope of this post.)

Walker wants this immortality as well, and in order to convince the famously un-empathetic Fries, he has acquired Nora Fries’ cryogenics chamber and is willing to fund Fries’ research for as long as it takes to find a cure.  Batman and Robin come out to Oceana in search of Mr. Freeze, but when they get there they realize that Walker and his Ayn Rand Apocalypse have got to go. 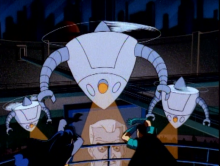 Walker: My world will have no crime, violence, or pain.

Robin: You can add free will to that list, too!

Walker: A small price to pay for order.

Batman: Your order!  For your select few!

Walker: Excuse me, but I fail to see the problem with that.

Batman convinces Mr. Freeze that if he stands by and allows Walker to destroy the rest of the human race, even if he does cure his wife she’ll probably hate him for it, and so together the three of them get down to business: beating the piss out of robots. 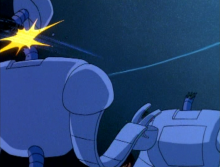 One of the things that the B:TAS writers really enjoyed was making Batman fight robots.  Why?  Because they’re not human, and that means that writers and animators can get away with things in the fights that the Fox or WB censors would not normally allow.  Like Batman jumping directly on to a robot’s shoulders from above, driving its face into an instrument panel and causing sparks to fly.  Or, you know, decapitation by batarang.

In the end some dials get twisted up into the red zone, giant icebergs start erupting everywhere, and Oceana explodes in a maelstrom of fire and water.  Its population is evacuated safely, but both Walker and Mr. Freeze are left behind.  We see their fates in the episode’s most chilling (ow, sorry) moments. 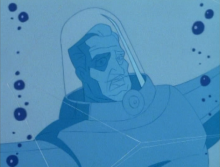 Walker, now immortal, is imprisoned, unnoticed, in an enormous block of ice that sinks into the cold depths of the sea.  He never appears in the series again.

Fries stays behind with his wife, her liquid-filled chamber unmovable on such short notice.  Since it was Fries who deliberately started the reaction that destroyed Oceana, this is basically premeditated suicide.  Both of them survive, albeit in a fate similar to Walker’s: encased in a bubble in an enormous block of ice, floating with the current across a vast sea. 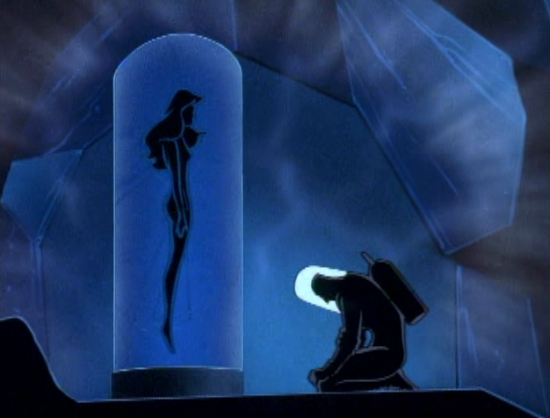 However, the thing that Bioshock and Batman: The Animated Series really share is a depth of tone that was unusual in their respective mediums and respective times. 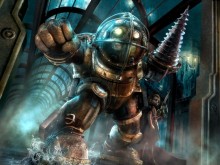 Nobody really expected a Fox Kids animated show about Batman created by the guys who did Tiny Toons airing on weekday afternoons in the early nineties to be so intelligent, mature, philosophically challenging, and visually engaging.  Nobody expected a first person shooter with puzzles, a dubious morality system, and elements cobbled from both survival/horror and roleplaying games to be a philosophical treatise comparable to Whittaker Chambers that touched you as much as it terrified you.

Years from now, you will still be able to bring up Bioshock and B:TAS to show that great story telling and art is possible no matter the medium, no matter the restrictions.

Update: YouTuber Gamingage1 has helpfully pulled video from the episode: