It's the wish Miles deserves and the one he needs right now. 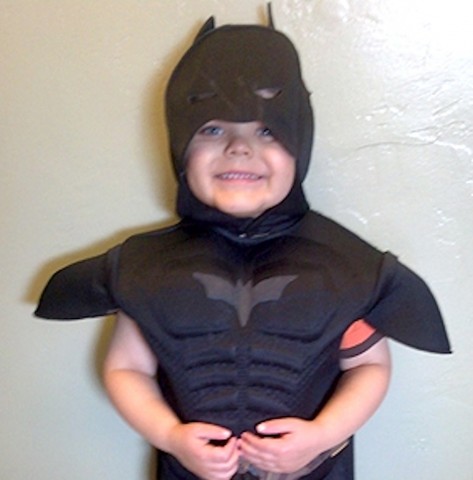 Sadly, five-year-old Miles is struggling with leukemia, but the Make-A-Wish foundation is coming together with the city of San Francisco to make every kid’s dream of becoming Batman a reality for him. Thanks to thousands of volunteers, the city will be transformed into Gotham on November 15, and Miles will save the day.

In a series of prearranged events, the San Francisco Police will put out a call for Batkid’s help in rescuing damsels in distress, stopping the Ridler from robbing a bank vault, and freeing the San Francisco Giants’ mascot from the clutches of the Penguin. He’ll get calls on his Batphone and rush to save the day in his own Batmobile accompanied by an adult Batman.

If that’s not already the nicest, most amazing thing we’ve ever heard of anyone doing for another person, there will be plenty of volunteers on hand to really sell the whole thing by playing the Batkid’s adoring, cheering public. They’ve got the whole experience planned right down to a “spontaneous” event where he will find the public calling for his help as he finishes his lunch.

At the end of the whole thing, the mayor will present Batkid with the key to the city in front of the grateful inhabitants of Gotham. It promises to be a great day for San Francisco in general, as they’re inviting anyone and everyone to participate, as long as you RSVP on Miles’ Make-A-Wish page. If you’re not in the San Francisco area, you can find coverage on Twitter with #sfbatkid.

(via Daily Mail and Make-A-Wish)