An Interview With Director Dana Nachman on the Documentary We Deserve: Batkid Begins 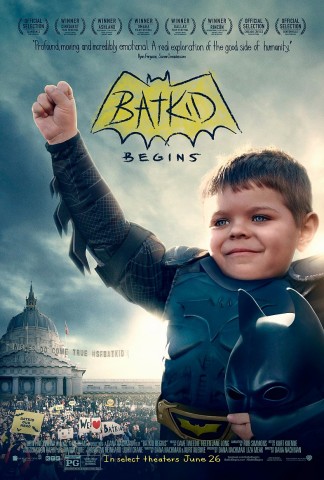 Documentarian Dana Nachman may not have been the most likely director to retell the story of Miles Scott’s Make-A-Wish day. Her previous films, Witchhunt (about child molestation), Love Hate Love (about terrorism), and The Human Experiment (an expose on dangerous chemicals found in household products), all deal with pretty dark subject matters. But she pulled off an infectiously joyful look at the power of a community coming together in Batkid Begins. After making international news and going viral, Nachman retells the story from the perspective of those who helped turn San Francisco into Gotham City for five-year-old leukemia patient Miles Scott.

Lesley Coffin (TMS): I understand that you heard about the event after it had already happened. How did you hear about this and decide to make the film?

Dana Nachman: I heard about it after the fact and thought it would make an amazing documentary. I was talking to my producer, who works at NBC News, and she was trying to get an interview with the family. She called me back a few minutes later and said they aren’t doing interviews with the media anymore, but they are willing to meet with us about a documentary, which was super exciting.

TMS: What was it about this story, and what Make-a-Wish did, that made you want to tell it from the volunteers’ perspective?

Nachman: When I found out they asked for 200 people to show up because they felt that would seem like a pretty big crowd to a 5 year old, but 25,000 people came. Their goal was never to get people engaged online or go viral, and they had close to 2 billion hits. That really intrigued me. What makes something go so big, unintentionally? That is what drew me in, and working on it over the last year and half, what really strikes me is seeing what happens when a community can come together for good, which happens so rarely. So the film really became about the community and what can happen when people work together. 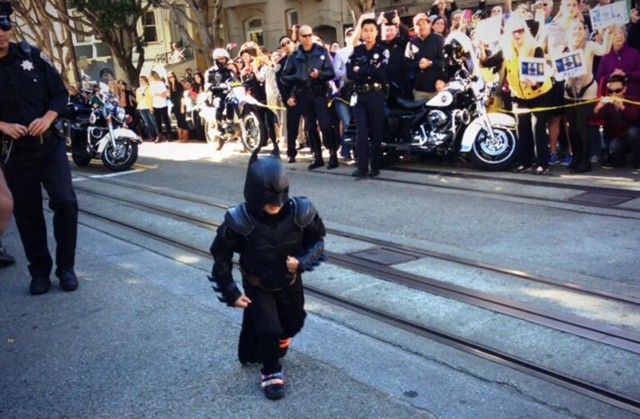 TMS: Because you started the project after the event had happened, was it difficult to get in touch with volunteers?

Nachman: It wasn’t hard at all, actually. Make-a-Wish was great to work with and gave me a list of every person that was involved in the day, and I just started emailing, and everyone seemed to say yes right away. Everyone seemed so proud of what they’d done. Much like how I feel now, after working on it for a year and a half, I don’t want this time to end, because I’m so proud of it, and it was so much fun to work on. They felt the same way about the day. You just can’t help but smile when you talk about it. It was an amazing experience for them.

TMS: Miles’ parents spoke to Make-a-Wish about their son’s wish, but asked that they make this a goal for him getting through treatment, rather than do something while he was sick. Did you get the sense that this provided the family a distraction?

Nachman: I’ve been working with Make-a-Wish for a year and half, and before this I didn’t really know exactly what they did. I didn’t realize that because treatments have changed so much, a lot of children are surviving these scary diseases. So 80% of the kids who receive wishes do survive into adulthood. So what these wishes become, rather than their dying wish, is it marks the end of a really horrible chapter which robbed them of them of a big piece of their childhood. Miles was diagnosed at 20 months old and went through years of treatment. The entire family’s life stopped. They couldn’t go on family vacations or focus on anything fun. So this was the end of that chapter and he got this amazing graduation party … an entire city shut down to turn it into Gotham for him. 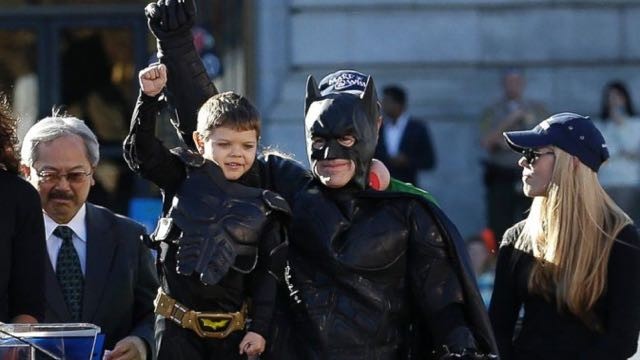 TMS: Batman is a trademarked property that Make-a-Wish had to deal with in order to stage the event with logos and costumers. But then you had to deal with it as well as a documentarian. Did you look into the rights questions before starting the project?

Nachman: For sure. I used to be scared to go to lawyers for my films because it’s so expensive. But this is my fourth film, and I’ve realized that you really do have to nip these issues in the bud before moving forward. So I spoke with my entertainment lawyer about what the perameters of using Batman would be for the film. And what was decided is … we’re documenting this event that really did happen, so we can use footage shot that day. The cars with the Batmobile symbol is not something you can work around. But if we were going to create our own animation for the film, we couldn’t use Batman without permission, because that is something we created for the film. So we were very careful to dot every I and cross every T when dealing with Batman. We were very conscientious about it from the beginning

TMS: When you were picked up by New Line, were some of those restrictions lifted?

Nachman: They didn’t have to be, because they bought it after our premiere at Slamdance, and we’d already gone through all of it. We had our insurance and legal things buttoned up, so there wasn’t anything outstanding we had to deal with when they bought us. But when they promote a film, they have a completely different set of circumstances which they had to deal with, and it would have been completely different if we had to promote the film ourselves.

TMS: How did this event, and now this film, impact Make-A-Wish?

Nachman: I’ve heard Patricia Wilson talk about this a lot, and after Batkid went viral, they had a big bump of donations. They were up 26% worldwide, but they were also up 40% in referrals from hospitals, which was great. My hope for the film is that it keeps the spirit of that day alive for those who weren’t there or don’t even know about. But also, after you watch the film, you can’t help but think how much fun it would have been to be there and part of the day. So whether it’s for Make-a-Wish, or any other volunteer organization, the real message of the film is the power of community service and positive experience you can have when you give.

TMS: This movie is unapologetically optimistic about community and humanity, which can be rare to see, especially in documentaries. Was that part of the film’s appeal for you?

Nachman: I’m a pretty optimistic type naturally and everything about that day appealed to that sensibility—wow everything came about and everyone who worked on it went that extra step to try to make it even cooler for Miles. But most of my films before this have been pretty dark, and although I wouldn’t call them cynical, they have been disturbing. So I was definitely looking to tackle a more positive subject matter. But this type of documentary definitely does fly in the face of most documentaries, and even my own. It’s important to use documentaries to shine a light on those bad things that happen in our world and raise awareness, but it is just as important to capture those good moments when they come to the surface and celebrate them.

TMS: The other films sound like such weighty subjects, which can be draining to focus on while directing a film. Was this film easier to work on in terms of the mental stress you are under as a director?

Nachman: It’s so hard to commit yourself to topics, because you know it will be a minimum of two years, and really, it’s more like four or five years. So you have to be obsessed with the topic to invest that kind of energy. And it’s not that often that those stories come to you, but it was a lot easier to pitch Batkid Begins than it was to pitch my other films. And maybe because of the experience I had, but it is also hard to go out and talk about toxic chemicals which will kill you and keep your energy up. Batkid was fun and people got excited about being involved in the film. So instead of shying away from those difficult subjects, I need to be very strategic about the ones I pick to tell, and keep that enthusiasm for five years. When I first started, I didn’t realize how draining these tough subjects could be and how long it would take.

TMS: What about the Q&A and festival experience with this film?

Nachman: I think with my other films, people were very outraged after watching them and needed a cathartic moment to talk about it and learn more about the issues. And I always wanted a lawyer or expert with me when doing the Q&As, because they would ask me questions beyond my scope of knowledge. But with this film, people have spent the entire film smiling and tend to have very fun questions which I feel comfortable answering, and I love talking about the film with people.

TMS: The story has been optioned to be a feature film with Julia Roberts. Did they option the documentary as a remake?

Nachman: Sort of. Warner Bros/New Line bought both the rights to the documentary and to remake it as a feature, and I’m slated to be an executive producer on it, which I’ve never done before, so we’ll see how that goes.

TMS: Is narrative filmmaking something you are interested in working on?

Nachman: I am. I love documentaries and will continue to work on them, but the ability to actually create my own characters would be kind of fun and freeing in a weird way. But it would be hard for me to wrap my head around the fact that I could tweak things to make them slightly more dramatic. I think I’d have a hard time getting away from being completely faithful to the facts.

TMS: Besides the upcoming remake, what else are you working on?

Nachman: I’m shooting a short and a feature. The short is about a professional motorcycle stunt man who was disabled and couldn’t work anymore and was living in constant pain. He was going to kill himself, but someone recommended he go to an art therapy class, but the only thing he knew how to do was draw stick figures. But after going, he learned about sand art and now he builds these massive sand sculptures, all around Santa Cruz, and watches the tide wash them away, and it’s this amazing, therapeutic thing for him which is basically the only time he’s not in pain. And the feature is currently called “Pick of the Litter” about a litter of puppies before birth, and up to the two years they try to become guide dogs for the blind. They go through rigorous training until the moment they intelligently disobey, so they don’t walk their person into traffic, and they were just born a month ago so we don’t know if any of them will make it all the way through.