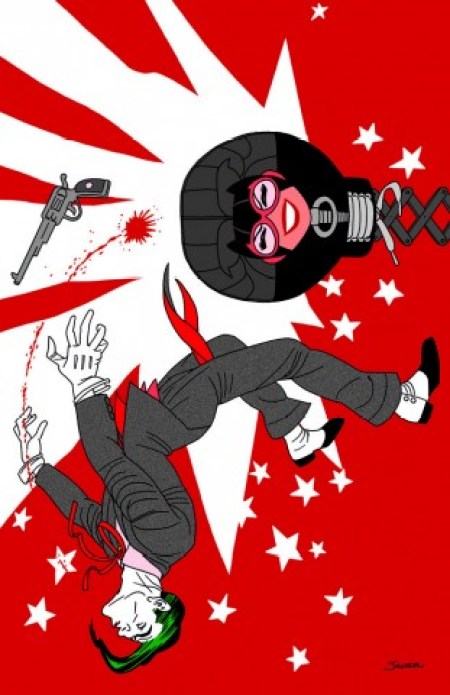 The above cover is NOT the cover in question. If you’d like to see that please click on the link in our intro paragraph.

In a cryptic official statement referencing “threats of violence and harassment,” DC Entertainment announced last night that it would no longer be publishing that controversial Batgirl variant cover:

We publish comic books about the greatest heroes in the world, and the most evil villains imaginable. The Joker variant covers for June are in recognition of the 75th anniversary of the Joker.

Regardless if fans like Rafael Albuquerque’s homage to Alan Moore’s THE KILLING JOKE graphic novel from 25 years ago, or find it inconsistent with the current tonality of the Batgirl books – threats of violence and harassment are wrong and have no place in comics or society.

We stand by our creative talent, and per Rafael’s request, DC Comics will not publish the Batgirl variant.

Many followers of #CHANGETHECOVER took DC’s statement to mean that Albuquerque himself was the target of harassment, with some fans even showing their support for the artist with “Je Suis Rafael Albuquerque.” But as Albuquerque explains:

Ill talk more about it tomorrow but I was never threatened. just to make it clear.

Something to clarify, because DCs statement was a little unclear. @rafaalbuquerque did not get threats. People OBJECTING to the cover did.

I stand behind Rafael as an artist and a friend, and think he made the right decision.

In his full statement, Albuquerque wrote:

My Batgirl variant cover artwork was designed to pay homage to a comic that I really admire, and I know is a favorite of many readers. ‘The Killing Joke’ is part of Batgirl’s canon and artistically, I couldn’t avoid portraying the traumatic relationship between Barbara Gordon and the Joker.

For me, it was just a creepy cover that brought up something from the character’s past that I was able to interpret artistically. But it has become clear, that for others, it touched a very important nerve. I respect these opinions and, despite whether the discussion is right or wrong, no opinion should be discredited.

My intention was never to hurt or upset anyone through my art. For that reason, I have recommended to DC that the variant cover be pulled. I’m incredibly pleased that DC Comics is listening to my concerns and will not be publishing the cover art in June as previously announced.

With all due respect,

Not surprisingly, DC and Albuquerque’s decision was met with typical dude-bro whining and a ComicGate hashtag protesting “censorship” (in quotation marks because that’s not how censorship works) and “reverse sexism” (in quotation marks because that’s not actually a thing), with the cover cancellation being compared to the presumed lack of ethics in video game journalism, concerns over sexism in STEM fields, and the recent deadly terror attacks on Charlie Hebdo. Thankfully, common sense prevailed elsewhere:

Oh COME ON guys. The Batgirl cover was a misfire for the people who read that book. Wrong tone. Pulling it was a very reasonable decision.

It ain’t censorship, it’s not an outrage, it’s the right choice – every aspect of a book should be working for the story and the audience.

Variant covers don’t necessarily show a story moment from inside. Nor do regular covers, these days. But all covers are still about…

…reaching out to the audience you want to attract to a book. Welcoming an appropriate audience and making them want to sample the book.

Props to DC (and Albuquerque!) for considering the cover’s problematic implications and dissonance with the new Batgirl, taking online threats seriously, and for making this variant cover their Twitter header photo: