We’re singing "The Marseillaise" and you must join us. 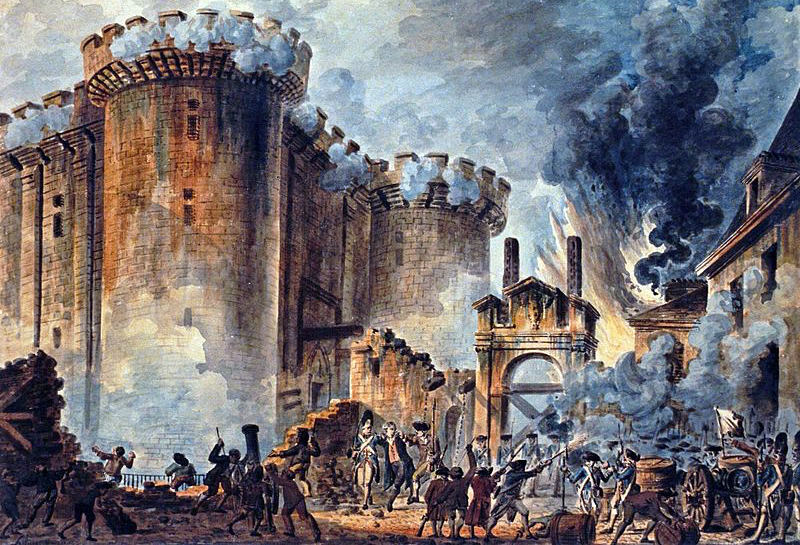 Aaaaawkward. But here’s the thing: I don’t think Poppy Harlow made a mistake. I think she was just admitting what we Americans secretly have always known: “The Marseillaise” is a million times cooler than “The Star-Spangled Banner.” We should be so lucky if our two countries switched anthems.

Look, let’s just admit it: “The Star-Spangled Banner” is a dud. It’s notoriously difficult to sing, to start; for every triumphant Whitney Houston-at-the-Super Bowl moment, we’ve also seen dozens of performers crack on the high notes or flub the lyrics (as captured in one of my all-time favorite “30 Rock” jokes). There’s a reason we all start applauding at sporting matches when the singer gets to “for the laaaaand of the freeeeee”—we’re all relieved they’ve made it that far without a total meltdown.

And it’s not like it commemorates a particularly illustrious moment in our nation’s history, either. Francis Scott Key wrote the poem whose words eventually became the lyrics to “The Star-Spangled Banner” in 1814, commemorating the successful defense of Fort McHenry against a British bombardment during the Battle of Baltimore. The battle was one of the few bright spots of the War of 1812, a conflict that only makes it into American history textbooks as an aside—probably because we lost. (Seriously. Americans like to pretend that the war was a “tie,” but go ask a Canadian what they think about that.)

The French national anthem, meanwhile, is epic from start to finish. Written by Claude Joseph Rouget de Lisle in the midst of the French Revolution, it was a marching chant, initially entitled “War Song for the Rhine Army.” Europe’s monarchies had allied together to invade France and destroy the revolutionary government; Rouget de Lisle wrote his song to motivate the French troops to defend their homeland and their families. It quickly spread among ordinary soldiers, and when volunteers from the southern city of Marseille marched into Paris singing the song, it was rechristened “La Marseillaise.”

Unlike “The Star-Spangled Banner,” “The Marseillaise” immediately pulls the listener into the action:

Arise, children of the Fatherland

The day of glory has arrived!

Hey! Get up off your lazy ass! Your country needs you—and quick, because things are going to hell:

Can you hear, in the fields

The howling of these ferocious soldiers?

They come right to our arms

To slit the throats of our sons, our wives!

The lyrics are brutal and unflinching in their depiction of the immediate horrors of war. This isn’t the picturesque imagery of “rockets’ red glare”, or the “bombs bursting in air” that correspond perfectly with Fourth of July fireworks displays. This is a song about women and children having their throat slit. The flag here isn’t “gallantly streaming;” in fact, it’s not even the French flag, but the “bloody banner” of Europe’s tyrannical monarchs. This is the threat bearing down on France, the threat that France’s citizens must fight:

Whoo, let’s go kick some tyrannical ass! Come on. You can’t help but get pumped by this—particularly that last line, which is both gruesome and weirdly poetic. To this day, historians disagree about whose blood is supposed to water French fields: the foreign blood of enemy soldiers? The “impure” (as in, non-noble) blood of French commoners sacrificing themselves for the nation? No one really knows for sure, but it’s a hell of a line to shout out along thousands of your compatriotes before an international sporting event. Forget the bro chant of “USA! USA!” —just imagine what a stadium full of rowdy American fans could do with a song like this.

Look, I know that some Americans are always going to have a weird chip on our shoulder when it comes to France. Alongside the English language and habeas corpus, Francophobia is perhaps Britain’s most enduring legacy in the United States. Even though the French gave us the layout of our capital, 23% of the continental United States, and our most iconic symbol of liberty, “a lot of people” don’t even know that France is America’s oldest ally, according to Trump. (I guess those people didn’t get to see Daveed Diggs as the Marquis de Lafayette in “Hamilton”? Because he was impossible to forget.)

For many Americans, France is a nation of 66 million “cheese-eating surrender monkeys,” fashionable snobs who smell bad and are mean to Americans when we visit their country and order a cold beer … and it’s only down to us that they aren’t all drinking German lager, anyway.

But just. Go watch that scene from “Casablanca.” Or this scene from “La Vie En Rose.” Or this real-life moment of fans spontaneously singing la Marseillaise while evacuating the Stade de France during the November 2015 Paris attacks, or France’s national assembly doing the same thing days later. Watch them, and then tell me you’re not ready to single-handedly storm the Bastille.

Lauren Henry is a writer and a PhD candidate in Modern French history focusing on colonialism, migration and identity formation. Ask her about France.