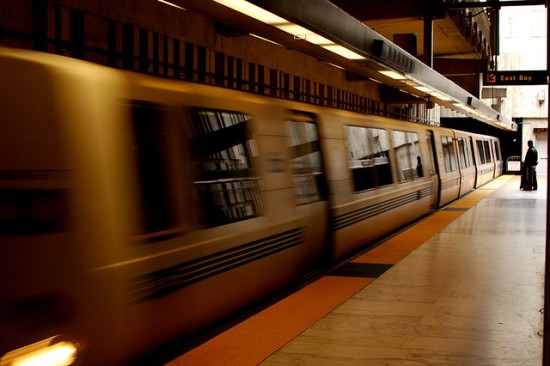 The San Francisco’s Bay Area Rapid Transit (BART) has confirmed that the organization disrupted cell phone service inside subway stations during a protest. Transit officials say that they intended to prevent what they called a disruptive protest planned for August 11. From the release:

Organizers planning to disrupt BART service […] stated they would use mobile devices to coordinate their disruptive activities and communicate about the location and number of BART Police. A civil disturbance during commute times at busy downtown San Francisco stations could lead to platform overcrowding and unsafe conditions for BART customers, employees and demonstrators. BART temporarily interrupted service at select BART stations as one of many tactics to ensure the safety of everyone on the platform.

The release goes on to say that BART recognizes the individual right to free speech, but does not allow protests in areas that require payment to enter — including station platforms, and subway cars. Protestors reportedly planned activities in response to the killing of Charles Blair Hill by the BART police on July 3, after Hill apparently pulled a knife on officers. This came after another fatal shooting of an unarmed man in 2009 by BART officers.

The San Francisco Chronicle reports that protestors had not publicized their plans, hoping to surprise BART operators and the transit system’s police unit. Presumably, mobile devices would have played a role in their efforts to organize. The chronicle went on to report that although police were standing by, the protest failed to materialize.

BART’s decision to suspend cell phone activity comes just days after UK Prime Minister David Cameron voiced a desire to suspend individuals from using social networking and messaging services during a crisis. In the wake of BART’s disruption, some individual(s) purporting to be associated with the hacker group Anonymous vowed revenge and compared the transit authority to deposed Egyptian leader Hosni Mubarak. During this year’s Egyptian protests, which eventually ended his presidency, Mubarak famously switched off digital communications across the country.

With digital communications becoming an ever-larger part of every day life, civic and governmental bodies seem to be struggling with how to best deal with these technologies. While BART certainly had legitimate concerns over the protest, such a sweeping action has certainly cast them in a bad light.

(via CNet, image via /charlene)