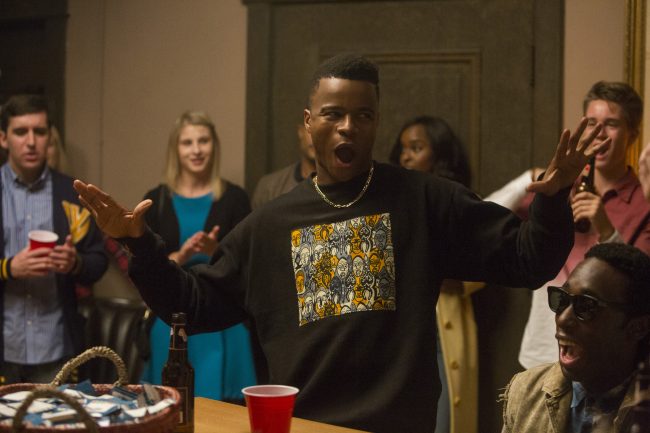 Warning: this article has spoilers for episode 5 of the Netflix series Dear White People.

Netflix’s Dear White People should be required viewing for anyone who thinks we live in a “post-racial” America. In the new show, each episode follows a character on the predominantly white campus of Winchester University as they grapple with different kinds of bias and activism, giving a look into all kinds of black experiences—what it means to be dark skinned, gay, and more—today. The fifth installment, which centers on student activist Reggie (Marque Richardson), is a powerful and terrifying reminder of the realities of race in America now.

In an interview with Vulture, Moonlight director Barry Jenkins talks about directing the episode written by Chuck Heyward and Jack Moore, and how he framed Richardson so he would “feel the eye of the audience through the camera.”

In episode five, Reggie and our other characters find themselves at a party having to educate his white friend about the N-word, which escalates into a greater fight amongst the party-goers. This chaos spirals more and more and end up with the police arriving and a campus security officer pulling a gun on Reggie and demanding to see his ID. “What happens in that episode is more like what you would expect to happen in the world of Moonlight than in the world of Dear White People, in the hallowed halls of Winchester,” Jenkins says, “and yet, of course, these things do happen at places like that.”

As we follow Reggie through his day, we learn all kinds of things about him—his amazing smarts, his relationships with his friends—but in this situation the policeman only sees his blackness and reads it as danger. Of course, it doesn’t matter what his achievements are, pulling a gun on a student is a completely inappropriate reaction. This episode highlights the danger that black people live through every day, even in what we might perceive as safe spaces. The previous four episodes don’t shy away from the violence and aggressions directed towards black bodies, but this is a jarring scene as we go from the group hate-watching a movie called Oh No She Didn’t to a violent confrontation. Jenkins says he was careful to make sure the scene was about “very organically living in the truth that there is always the possibility of this sort of thing happening—that the threat is always present in the American society we live in today.”

When asked about the lack of music in the scene, Jenkins explains it would have distracted from the energy that was there naturally from the actors. “I thought the conversation that was happening in that scene was so real that there was no need to bring in any artifice. The energy between the characters would carry the day.”

“That was the most emotional I’ve ever felt on a set,” he reveals, “Everybody was crying. When that gun was pointed at Reggie, it felt like it was pointed at everyone. The gravity, the reality of what we were doing was clear. And everybody approached the material with clear eyes.”

Have you been watching Dear White People? How did you respond to the episode?