Can People Stop Calling Barry and Iris Brother and Sister on The Flash? 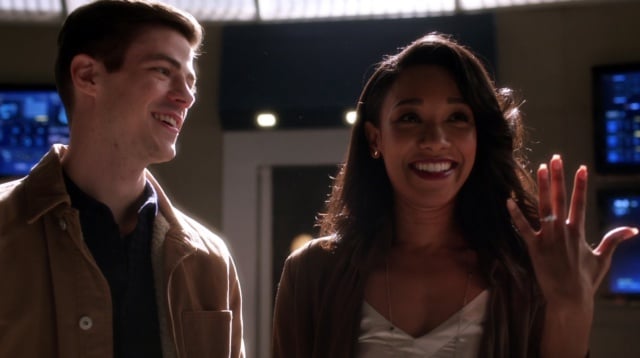 As I’ve been catching up with The Flash, I have been excited to see Iris West, played by the beautiful and highly comedically talented Candice Patton, getting to play a more active role in the story. She is helping run Team Flash and brings a more stable, pragmatic sensibility to the cast of scientific characters. Yet still, I see people bringing up the same tired question/discussion in almost every episode of The Flash that features WestAllen (Barry Allen and Iris West) as the main focus: aren’t they brother and sister?

It has been four seasons and yet this is still brought up nearly every single episode. No one considers Iris and Barry siblings except for y’all who are stuck on the subject because you don’t want to support WestAllen and would prefer him with every other white blonde woman who comes to the show (Felicity, Patty, Kara) and for some reason Caitlin. There is just something about Iris and Barry that just…you cannot get past the fact that they were raised in the same household. M’kay, I’m going to pretend for a moment that in this world where people literally ship actual biological incestuous couples, that people find it the fact that Iris and Barry were raised together. Let’s me break it down for you.

Barry had feelings for Iris before they lived together. It is established that Barry has had feelings since they were young kids at school. They were best friends and that is why when his mother died and his father was sent away he went to go live with Iris and her father Joe. Joe became his foster father and as a result, became a genuine father figure to Barry, something that goes both ways. However, Joe has never seen Iris and Barry as siblings, because Joe knew that Barry had feelings for Iris. So while yes, Wally does see Barry as his brother (and vice-versa) because of Joe raising him, no one questions it because those relationships are not nullified or changed by his relationship with Iris. If there was a time where they saw each other in that way it would be one thing, but as multiple Earths have shown us, they are drawn to each other in every life and every universe.

The problem that has always faced WestAllen, in my humble opinion, is that the relationship should have been pretty much established since season one. Just have them be a couple and let them just be a power team throughout the series, I mean that’s pretty much what they have always tried to do. However, they wanted to put a lot of unnecessary road bumps to drag out the relationship tension: Eddie, Patty, breakups, time warps and time travel stupidity, all with the intent to make us wonder “will they or won’t they?” well we already knew they would, so just stop playing and make it happen.

In that regard I get some people being frustrated with that, but this whole sibling thing is just a smokescreen for people who don’t like the couple and can’t come up with reasons why. They have chemistry, they have the history and they have the epic couple theme music. If you just don’t like them, okay, but it’s not because you think they are brother and sister.

Now it is happening and they are being good together. They are working on their communicating and Iris is being a badass, as of right now Barry hasn’t ruined everything. It’s no Jake and Amy (my gold standard), but it’s pretty damn good nonetheless.