John Barrowman Reveals He’s Finally Been Asked To Participate In The Doctor Who Anniversary, Then Gets Yelled At For It 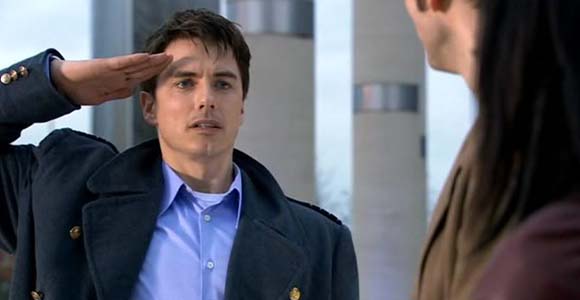 The last we heard from Torchwood star John Barrowman, he said he was “leaving room” in his schedule for Doctor Who 50th anniversary celebrations but that no one had reached out to him yet. Thankfully, we can report that’s changed. However! The folks who asked him may not be too happy he spilled the beans.

Barrowman gave ITV’s “This Morning” the exclusive yesterday saying, “I haven’t had any information up until just about right now – and all I can say to you is that we’re discussing things.”

He continued, “Even yesterday I was giving interviews and I was saying I have heard nothing, and now I can give you a little bit of an exclusive. I’ve heard something.”

Good news for Barrowman fans of course. Though there hasn’t been a shortage of him lately. He’s currently starring in The CW’s Arrow,  and in fact, producer Andrew Kreisberg has told Barrowman they’d let him have the time off to participate in the anniversary if need be.

But here’s the thing. Though Barrowman gave away no details in his reveal, even tweeting, “Re 50th I didn’t say in what capacity or what medium so stay calm and carry on. Jb,” he apparently got in trouble for it.

After the announcement, Barrowman was then a guest on Graham Norton’s BBC Radio 2 show and said, “I have nothing really to say about it…If I get asked a question I try to be as vague but as honest as possible.” But his sister Carole was kind enough to chime in with, “The BBC are mad at him.”

Poor guy, sounds like he was really excited about finally being asked then got a slap on the wrist for opening his mouth.