Just a Phase: Why Barbara Kean is Gotham’s Most Problematic Character 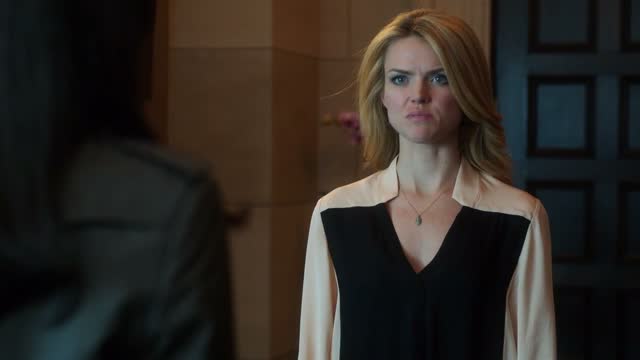 Let’s be real: there’s a lot to unpack about FOX’s Gotham, and most of it ain’t good. Leaving aside Donal Logue’s long-suffering Bullock and Robin Lord Taylor’s delightfully sinister Penguin, Gotham is a mess of paint-by-numbers plotlines and unsubtle winks to the Bat-canon. Many of these aspects of the show had some potential, but nearly all were squandered—and none more so than the sad tale of Barbara Kean, the latest in a long line of bisexual characters thrown under the bus by network TV.

Even if you watched all of Gotham‘s ten episodes thus far—and I’ll readily forgive you if you didn’t—it’s easy to overlook Barbara (played by Erin Richards), or even forget her entirely. She’s one of the least important characters on the show, even though she’s engaged to Jim Gordon, Our Hero. Barbara makes an appearance roughly every 1.5 episodes, sticks around for five or ten minutes max, and then vanishes into the aether until the writers need a little more romantic tension. She receives little characterization, other than her status as a rich art dealer and her shameful affection for marijuana—oh yeah, and she’s bisexual.

To the show’s credit, at least Jim doesn’t call off the engagement when he finds out Barbara used to date Renee Montoya. But that’s small potatoes next to the crime it does commit: falling into the Cheating Bisexual trope. Spoilers for the show you didn’t watch this season: at the end of the ninth episode, Barbara has fled Gotham with Renee, sharing an implicitly postcoital kiss while poor clueless Jim calls Barbara’s cell phone.

Look. I’m a big fan of seeing my sexuality represented in mainstream media. Arrow‘s Sarah Lance/Nyssa al Ghul romance thrilled me to bits, as did (more spoilers) Legend of Korra‘s big reveal that Korra and Asami became a couple in its finale. Bisexuality is getting harder and harder to erase from pop culture, and that’s excellent news for queer kids and adults everywhere.

But that doesn’t mean that all representation is good. Barbara, in cheating on Jim with her old flame, isn’t just a traumatized woman seeking solace (although she certainly is that as well). She’s a walking example of society’s most hurtful stereotypes about —that we’re confused about what we really want, and thus incapable of holding down a monogamous relationship.

What makes this all the more infuriating is that in Batman: Year One, the book upon which so much of Gotham is based, Jim and Barbara’s roles are reversed: Jim develops feelings for his coworker, Detective Essen, which in later stories leads to his and Barbara’s divorce. Gotham instead chooses its expendable female character to bear the burden of infidelity. After all, who could ever root for a flawed protagonist?

I’m not saying that all queer characters should be flawless, or even be good people. Arrow’s Nyssa certainly isn’t, nor is NBC’s maybe-bi version of John Constantine. (Hell, Barbara’s dalliance is far more palatable overall than her straight-up idiocy in the previous episode.) What I am saying is that a queer character’s sexuality shouldn’t be a reason to shame them. Let’s put a moratorium on the easy sexual clichés, at least until pop culture becomes less toxically queerphobic.

And while we’re at it, how about giving Babs a few more lines?

Sam Riedel is a freelance writer and editor from Brooklyn. He subsists on a balanced diet of noodles, Pokémon, and science fiction. Can be observed in his natural environment on twitter or tumblr. Prolonged contact may cause irritation. You can find more of Sam’s work at SamRiedel.com.