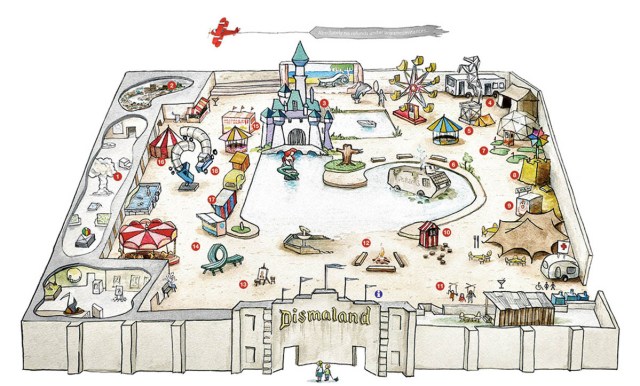 Dismaland, a UK-set riff on Disneyland helmed by the ever-enigmatic Banksy, has confirmed the rumors that it will open its doors this weekend and offered an extensive tour of the whole park to Colossal, who have uploaded an incredible photo-set of several art installations on display there. My favorite might be the super-distorted Ariel statue, or this The Birds-meets-Mary Poppins horror-show, or maybe this alarming Seaworld piece. The creepiest pick of the bunch? Probably the nightmare carousel.

Banksy will display 10 artworks of his own at the park, but he’s far from the only artist involved in this massive exhibit (although he may be the most well-known name). Dismaland’s long list of contributing artists necessarily includes lots of sculptors and physical artists as well, like Kate McDowell and Ronit Baranga and many many others.

Dismaland is open from August 22 through September 27th, 2015. Sounds like it could be a great vacation spot for any subversive family! Except, uh, you probably shouldn’t bring kids to this. Unless your kid is Wednesday Addams. Then it’s fine.

(via Colossal, image via Dismaland)